So we are heading back in March and this will be our first trip back since late June this year. So no experience with Harmonious yet. Have a DD2 and DD6 so we would like a good vantage point. I think you can get a package from R&C or maybe Spice Road? What is the best plan of action? I’ve watched the old show in La Hacienda but it is a crap shoot on window seating and it sounds like the ceiling might be lower on Harmonious. I tried to comb through posts but I didn’t see anything definitive. What do you all think?

Really the best vantage point is the one the show was designed for which is the old fast pass area between the 2 shops at the head of world showcase. A lot of the show is lower to the water and on the giant screens in the water. As long as you can see most of them you should be fine.

I did a fair bit of reading on this topic, and found this article / video to be the most thorough:

Find out where to view the Harmonious fireworks show at Epcot. Including where the best places are to watch the fireworks around World Showcase.

Our Epcot day was 12/23 - we did have an ADR for La Hacienda, but ditched it since we were still full from our lunch ADR. We then decided to go with the front view, i.e. camped out at World Showcase Plaza. This gives you the view of the main Stargate and two tacos.

The benches up front were already taken, so plan B was to leverage a similar tip I’ve seen for MK fireworks, i.e. we stood a little bit back, by the fences for the landscaping. This allowed us to stand on the curb for a little extra height.

Our spot was next to a trashcan. You could also leverage the trashcan for the littles if needed 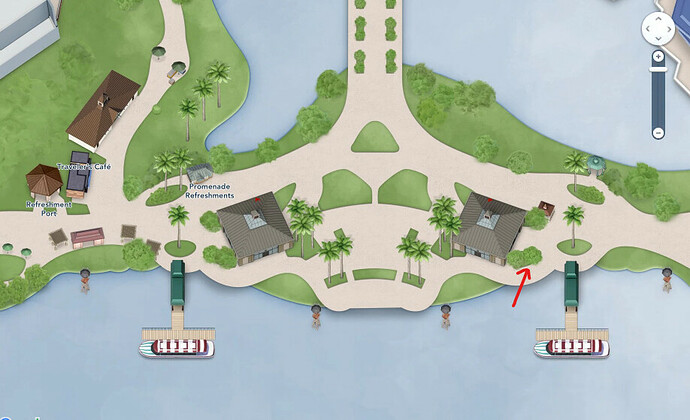 Some sample photos (Pixel 4a 5G) from our spot: 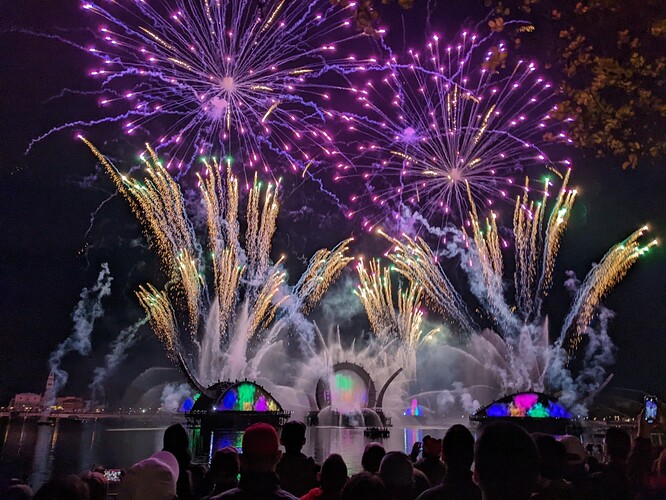 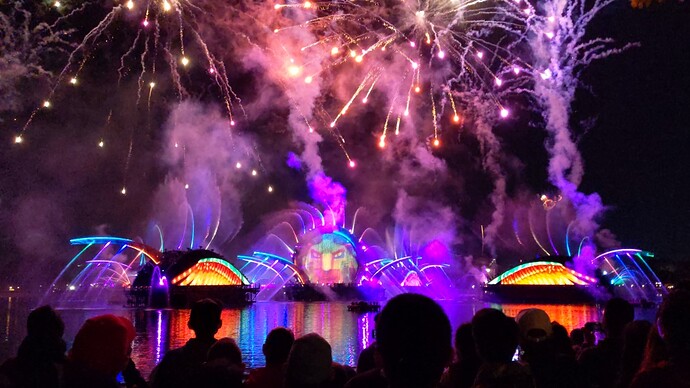 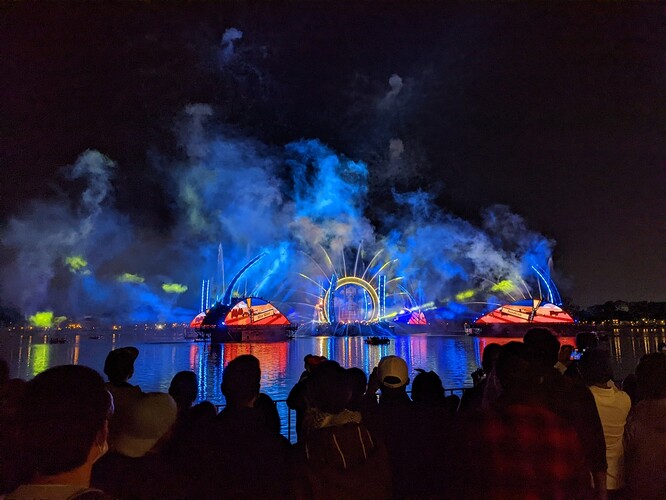 Also, another tip in case it’s relevant, since you have young ones - knowing that we wouldn’t be able to manage two TS ADRs in a day, we brought some frozen microwaveable dinners to tide us over. The Epcot Baby Care Center is just a short walk away. There are restrooms there too. 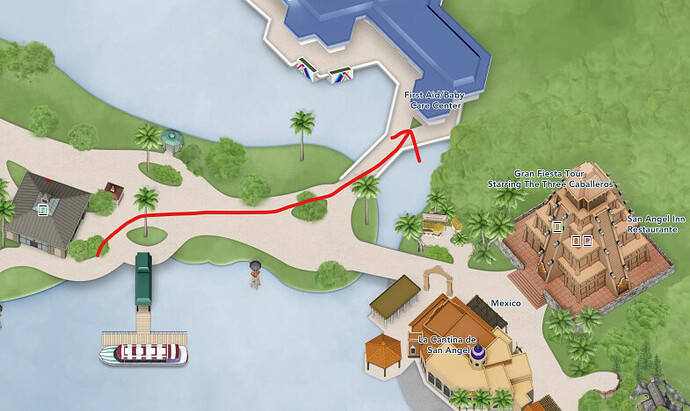 You all are awesome as usual. We have definitely been in the old fast pass area for viewing. That would be ideal of course. Great advice all the way around though!

Are there still picnic tables back there? If so little ones could stand on them to see better

I know I just said to stand on a table for eating but it’s also a nice place to sit then too.

Are there still picnic tables back there?

Ah yeah, what I called “benches” would probably be better described as picnic tables. Those were already all taken by the time our family got to the area (around 8:15-8:30pm).

When we were there, the center area (the old FastPass area) was blocked off, as there was a stage set up in that section.

Sounds like the Spice Road Table fireworks viewing thang would be less than overwhelming.

Think so - depends on your goals I suppose?

Here’s another article from Tom Bricker - though I felt it was not as thorough as the Attractions Magazine one up above. He lists some more unconventional spots.

It’s been a couple of decades since my last trip but it looks like Moroccan viewers would have little Line Of Sight on the Stargate. Not sure if the islands would also limit view of the Side Tacos.

I saw Harmonious three times in October from three different spots, ranging from a private VIP area to being at the back of a six-deep scrum.

My conclusion is that it doesn’t matter all that much where you are. I’m a sucker for up-charge options but I wouldn’t pay for a spot for Harmonious.

I personally wouldn’t go out of my way to see the Stargate. It’s a water screen and so pretty low intensity and resolution. The tacos are more vivid.

For me the best spot was also the worst: on the bridge between the UK and France. This was so that I could high-tail it to the Skyliner the second the show was over. No hourlong waits for me, thank you.

My conclusion is that it doesn’t matter all that much where you are.

Probably true… unless you have other considerations - e.g. height-challenged (OK, short) folks, and/or little ones.

For me the best spot was also the worst: on the bridge between the UK and France.

Interestingly, I did remember your recommendation for this spot, and considered that one of the possible spots - but then I also read @koi1217 's report here:

Harmonious. WTF is that Disney? I know there have been good reviews but I don’t think I’ve seen good reviews from those with kids. It was so hard to find an unobstructed view - one a child could actually see (since you’re looking straight on rather than up like the castle). The whole area fills with terrible firework smoke and we didn’t feel like we could breath. This happened really early on too. I heard someone on the SL complain bout this too. There was also no way to position yourself to leave quickly and see anything. That’s a choice I made but is important to a lot of families. Getting out quickly after a show is big deal. Everything past Japan towards the SL are terrible views. Trees and islands in the way.

No issues with smoke for us, and we were parked in the Epcot parking lot (splurged for preferred parking since trams aren’t running), and so the World Showcase Plaza area made more sense for us than IG.

Smoke drift is one more thing to consider. Try to be upwind from the lagoon. That’s one nice thing about the previous shows, you could find decent views all around World Showcase and find a spot that was not downwind. Finding a good spot to meet any person’s needs for Harmonious is like trying to solve too many simultaneous equations.

So true! In our case the equation ended up with DD9 in tears

We were there while the old FP area was set up with the Christmas stage. But behind that area the pavement slopes up quite steeply, making a fantastic spot where everyone can see over each other’s head. We had to look around Christmas topiary bit all in all it was a great, not crowded spot.

Basically between the two buildings in the picture!

Early on there was a consensus that Japan was a good vantage point that would have you facing the main Stargate so you can see the projections.

Is this still valid or should I ditch that idea and go w/ the old FP area?

Yup, Japan is still the 2nd best spot outside of the old/current FPP area. There’s also a tooooon of room there. So if you have littles as or wheel chairs, you can simply backup and be able to see.

They won’t turn off the street lamps, though. But then they don’t turn them off anywhere. Cause Disney go durrrr.

Since I will be doing my best to avoid crowds Japan may be where I plan to watch from.