Hi all … please be gentle as it’s my first post … my family and I are visiting at the end of October for 2 weeks staying at the Beach Club … my daughter is 15 and my son is 5 … where’s the best places to eat in the evenings including shows, character dining etc. I’m a bit intimidated by all the planning and we intended to try and do the Parcs early at rope drop then back to chill and swim at lunch time / afternoon then head back into a parc in the evening and tie that in with great food. 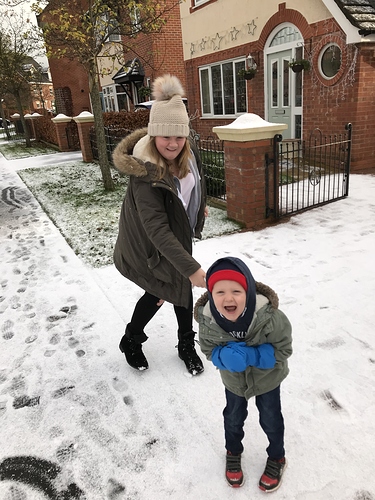 Hi! Welcome! I remember my first trip, I was so scared to travel to other resorts! Will you have park hopper tickets ( can you go to Epcot for dinner)? Will you rely on Disney transportation? Dining plan ?

Hiya … we’ve got deluxe dining plan … I subscribed to this site in the hope of making sense of it all lol it’s a massive responsibility not to cock it all up especially as it’s sooo expensive and may be the first and last time we go. We fly out Saturday 27th October for 15 nights and want a pretty chilled experience and after reading a thousand plus posts are thinking hit a different parc for rope drop using a touring plan till lunch then back to chill in pool then go back to a parc in the evening, maybe a water parc and lie in on the couple of days when the Parcs are really busy. We want to do everything from character dining to trick or treating on Halloween and a couple of shows … but it’s a lot to get my head round

I always start with my night time plans. What nights will you see the night time shows? You will want to see Happily Ever After on a night when there is not a party. You may want to see it twice. I’d you have deluxe dining you will want to try some signature dining: California Grill on a party night ( not the night you are going to the party), Tiffins, Cinderella’s Royal Table, Hollywood Brown Derby are good place to start. Deluxe dining is a lot of food! I usually do a buffet breakfast and a signature dinner. Then I can use my two snacks. You may also save all your snack cedits and plan a couple of lunches at the food and wine booths using those credits.

I started watching you tube vlogs

These were very entertaining they also do a lot of vlogs from the different restaurants.
I’m not saying to go by what they say but it will help you see whats out there and may help if your on the fence about a place.

I have a week off coming up … guess I’ll submerge myself in all things Disney and try and come up with an itinerary as I can see it’s going to take a lot of thought and much more homework. I will throw it on here and would love your opinion … like I say it’s weird to feel under pressure to plan it all out but I know without any plan we will miss loads and regret it … at the same time I don’t want to take the fun out of it and be frog marching everyone round the parc

Be careful, the planning can become fun! Warning: many of us love much about Walt Disney World and we love to share oiur options !

Deluxe dining at Beach Club? How did I forget Flying Fish and Yachtsman?

LOL know the feeling my DW & DD (Disney wife and Disney daughter) are having me do all the planing too. The only request I got was BOG, Ohana, and it’s a small world. I have been to Disney several time but that was over 10 years ago and have not stayed on property since 1984. Any help you need this is a great place to find it.

Best advice I can give is any must do dinning try to schedule it for a day or two into your trip so it is 181 or 182 days out from that date. Everyone can book 180 day only on site guests and DS guests get to book 180 + 10 days out. Meaning when you hit 180 days out you can start booking meals for the entire time you are staying up to 10 days a head.

Ahhh I see … that’s good to know thanks

Being at the beach club and having deluxe dining is perfect. That’s exactly what we did on our first visit. You can dine like kings

I you like fine dining (all the restaurants have kids menus as well) then you have some great restaurants near you. In epcot monsieur Paul, and teppanyaki, the Moroccan are great) others will have great recommendations as well. I’m sure there are character breakfasts in the beach club as well.

Use the boats from beach club to get to Hollywood studios. We love Hollywood brown derby in there for lunch or dinner. Ask for a booth table if you book there.

We did character dining at crystal palace in MK

Deluxe dining is brilliant when you’ve got it - eat at some of those restaurants above and wait to see the amount you would have spent!!

You will find lots of advice here… all of it well reasoned and from experienced sources. But I can’t help but recommend that you start with the Big Book. It is very well written, and excellent resource, and by reading a few of those chapters, you will get a much better idea, I think, about what questions to ask in this forum. You will also get a good handle on an overview of a WDW vacation. You can either read it straight through or use it like an encyclopedia, selecting the chapters for things you are interested in knowing.

Give it a try! 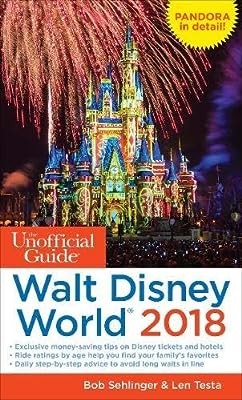 THE trusted source of information for a successful Walt Disney World vacation Compiled and written by a team of experienced researchers whose work has been cited by such diverse sources as USA Today a ...

Planning is half the fun. Your quite a ways out so you really have a lot of time to look at everything there is to do. You also have plenty of time at WDW, so you won’t be rushed. You also picked a great place to stay at the Beach Club. Your kids will be thrilled with the pool there, it is the best of all the resorts. Also, if you like seafood don’t miss Cape Mays Cafe’s, it is right at the Beach Club. Because of the International Gateway, you can walk directly to Epcot or take a boat. Once you start planning and see what there is to offer, you won’t be able to quit. Main thing to remember is book your ADR’s 180 days in advance and Fastpass + at 60 days out. Because you are staying on property, on the 180 day out, you can book 10 days right away. Many can’t so this is a great thing for getting what you want. The Big Book is just that, Big. It has way more than you need but it has a lot of comments and recommendations from people about every subject you can think of. There is also a companion book that is more condensed and has many pictures. Don’t forget to download the Disney app. Remember the book Jack in the Beanstalk. Well that’s what it’s like when you see Cinderella’s castle at the end of Main ST for the first time. It’s like climbing the bean stalk up through the clouds and suddenly there it is. a whole new world. Your going to have so much fun with you and your family that you will be planning your next trip before this one is even done. Have a Magical Vacation!

Thanks for the advice … we are all very excited

Part of the value of the planning is so that you get to know each park intimately. That way, when you’re actually there, you can respond to changes in circumstance and know what your alternatives are.

I started by allocating days to parks — this was based on looking at crowd calendars.

Then I made a list of every ride and ranked them — must do, would like to do, not bothered. Then I started thinking about FPPs and timings. There’s the added complication of fast past tiers: some combinations are not allowed.

I was less systematic when it came to restaurants. As I learned about a restaurant I liked the sound of, I tried to fit it into the schedule somewhere.

Very important to me were night-time shows and dessert parties. DHS is “complicated” because it has two: Star Wars and Fantasmic.

I booked and changed my FPPs literally dozens of times. Same with the ADRs. The whole thing becomes like a giant jigsaw.

Once I had a pretty good outline, I then started thinking about micro-timings — do I have time to get from this ADR to that FPP? I plotted each event on a map of the relevant park. This led to changes as I figured out more efficient routes — I didn’t want to be criss-crossing the whole of a park all day long.

All this took a couple of months of pretty obsessive research and thinking. I ended up with this: 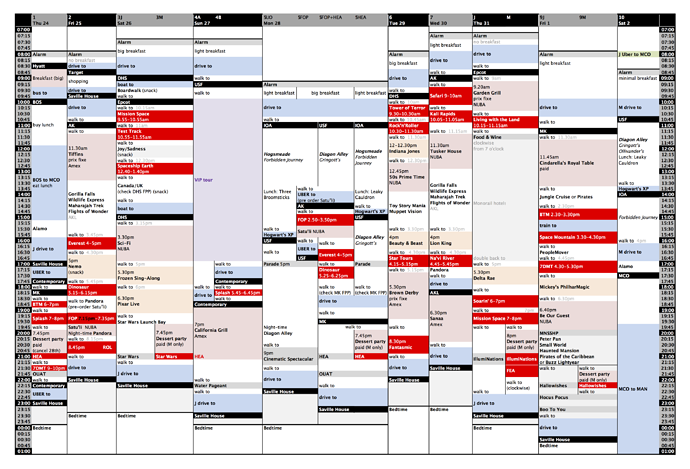 I’m not going to lie to you — I was very proud of it! You might see that some days have multiple plans. I tried to consider every possible contingency. This was (I think) the final version. It was literally version 20 or something.

Now for the reality!

I’d say I stuck to the plan pretty closely. Maybe 80% or more. But, as I said at the beginning, the real value of the planning was that I developed a really good knowledge of what was on offer and where it was. So that when it rained, for example, or when a ride was shut down, I immediately knew how to handle the situation.

Some people describe the process of fun. I’m not sure about that. I found it a mixture of being pretty satisfying, and being incredibly stressful. But that’s my personality type.

I guess a starting point is identifying your 5-star, must do, essential items. For me, one of these was FOP. These become anchors around which other stuff is then based. When I was finally able to start booking FPPs, park-to-day allocations changed because when I found an FPP for FOP, that became the AK day. It had to be!

My own experience was that FPPs and ADRs were actually surprisingly easy to get. I got everything I wanted — eventually. Perseverance is key! If you can’t find what you want, keep trying: it’ll come up eventually. Even FOP! I found two FPPs for FOP about two weeks before I arrived. (That led to a major restructuring of the schedule!)

Hi! Don’t be intimidated. Ask any question you need to. No one here will make you feel like it is dumb or been asked a million times.