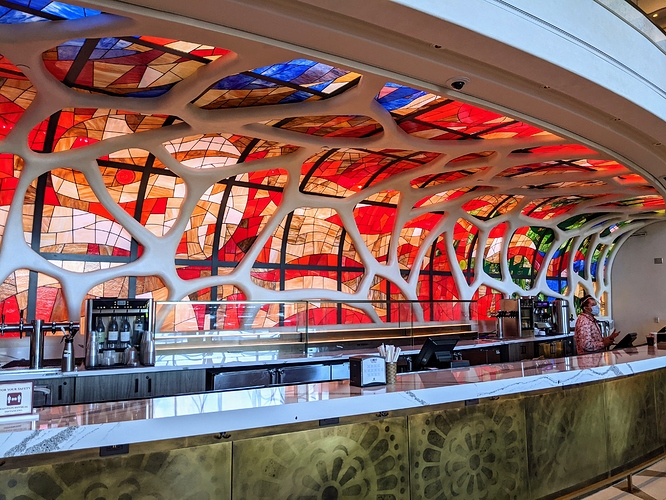 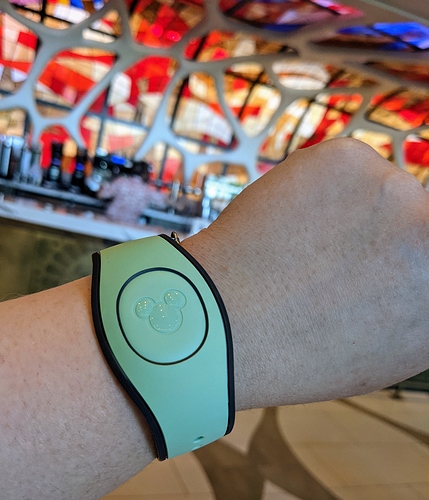 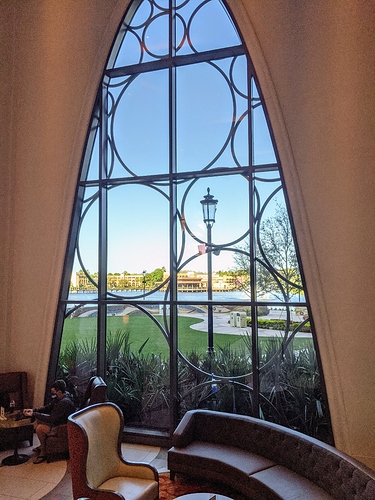 So nice that you got an upgrade! I stayed there one night but in a cabana. Loved walking around that resort, loved the pool with the pyramid, and loved Three Bridges!

What a journey to get to WDW, but it’s worth it! GDT and this whole resort are so gorgeous! I’m thinking this is a great time to be there, when there aren’t conventions going on yet, and the NBA G-League will be out of the Casitas by, or shortly after, 3/11.

(So, I’m basically failing at the live trip report thing! I will try to do better in the coming days and post more regularly throughout the day. But for today, you’ll have to make do with a recap and a bunch of pics all at once!

After my lazy morning, I made my way over to Epcot (via bus to HS and boat to the IG, since I wanted to start the day in WS but DIDN’T want to start by walking from the main entrance!). 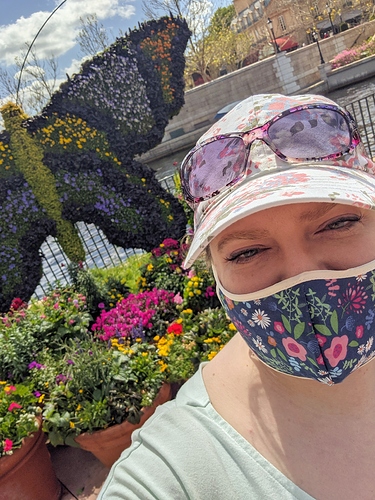 Meandered through France and Morocco but didn’t linger because I had one thing on my mind…FRUSHI! 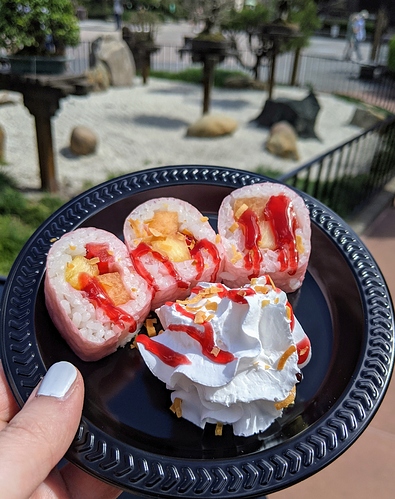 So I semi-scurried to Japan, got my frushi fix, and did a bit of shopping (no, I didn’t buy Kimono Kitty, but I won’t say I wasn’t just a little bit tempted!) 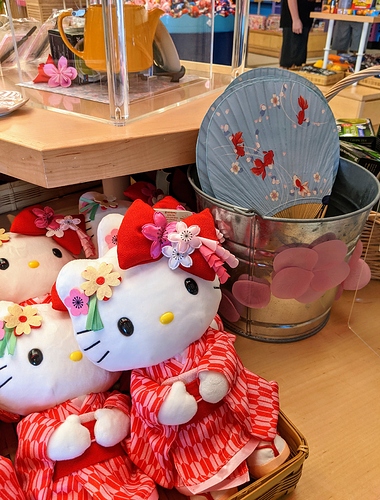 Next stop was China for egg rolls, bubble tea, and Reflections of China. 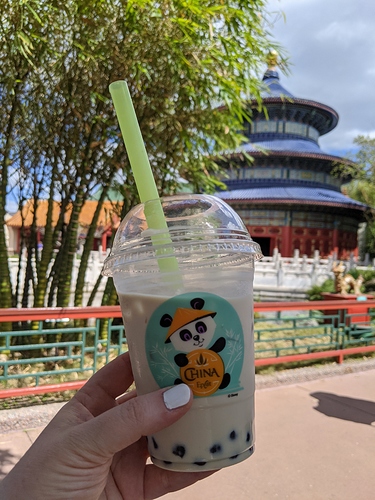 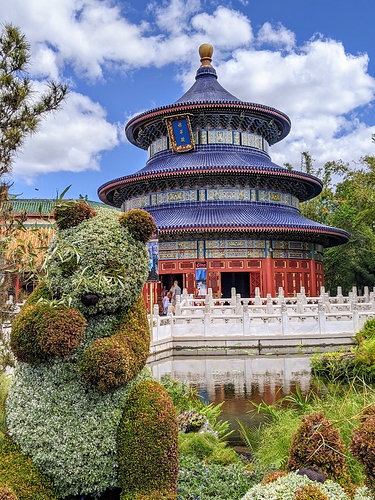 At this point I realized that it had been more than 24 hours since I had eaten an actual meal rather than just snacks on the go or on a plane… So I managed to snag a last-minute reservation for a late lunch at the San Angel Inn. I meandered that direction and found a lovely pathway festooned with live orchids tucked away next to the Mexico pavilion. Turns out this is the path for those with ADRs in Mexico, so not only did I get to see the orchids but I also got to skip the long queue to get into the pavilion! 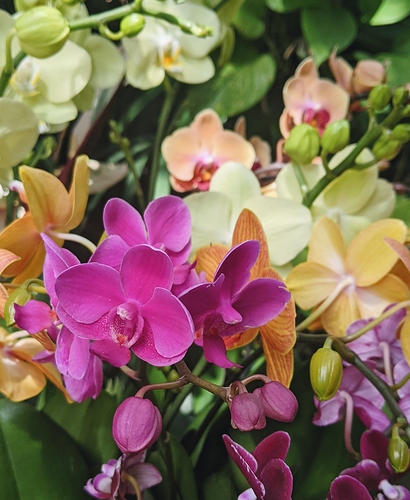 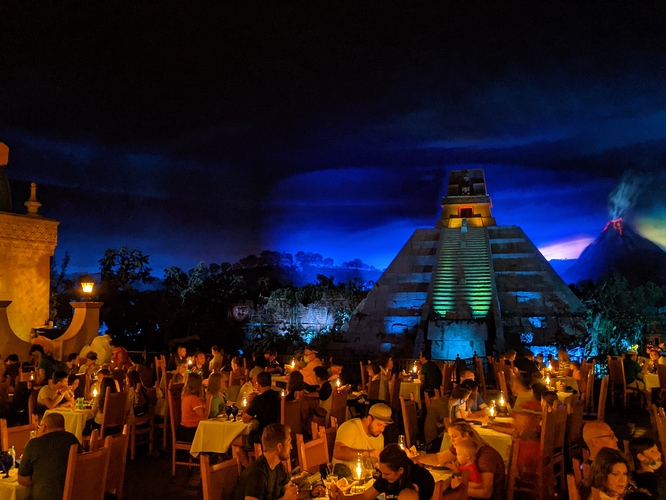 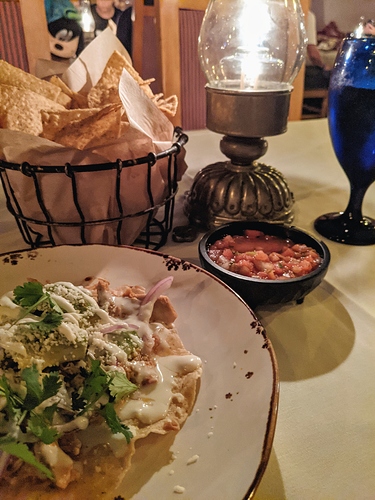 After a quiet, leisurely lunch I was ready to take on Future World!

I chatted with a friendly fish, spotted some seriously quirky brussels sprouts, flew around the world, and thanked the Phoenicians. 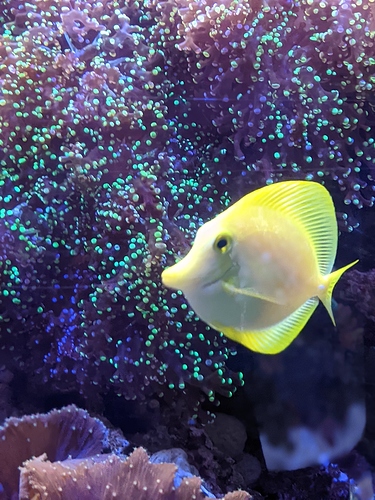 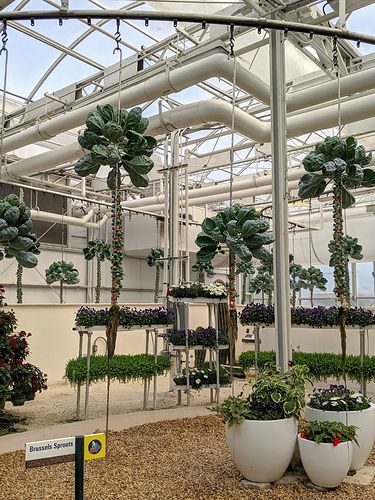 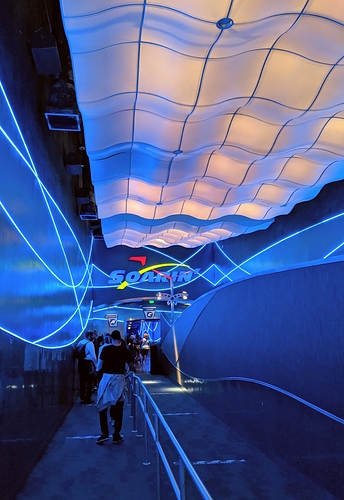 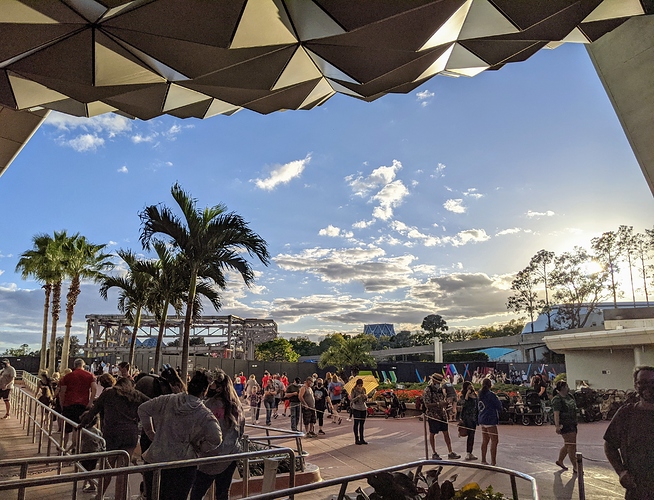 I had planned to call it a night at this point, but instead decided that there was one more thing I wanted to see before I went to bed… 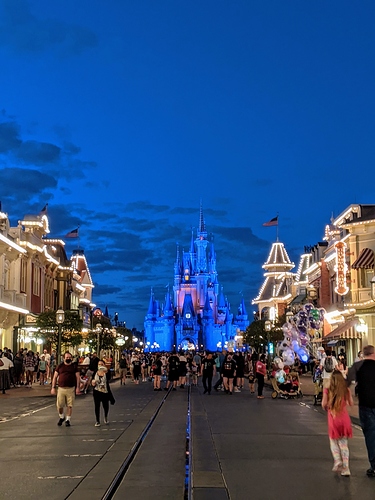 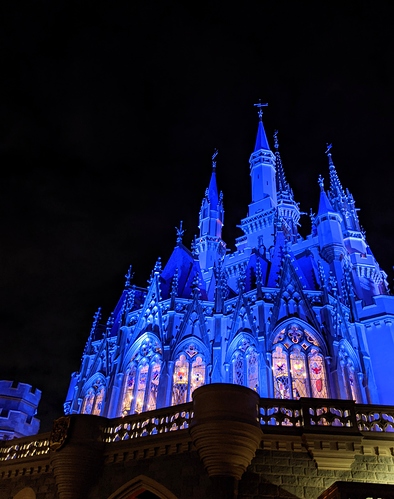 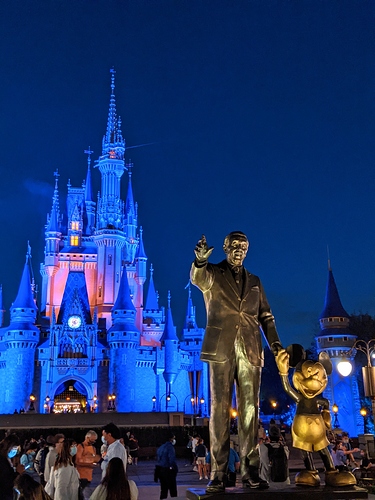 Funny story: While I was in line for SE, I texted my family and mentioned that I was about to thank the Phoenicians because that’s what Judi Dench would want me to do and my mom replied back with "ummm…what on earth have you been drinking in Epcot?!?

Too funny about your mom! Sounds like a really great first day. Can’t wait to follow along!

A few stats from yesterday:

CSR to IG took 45 minutes using a bus to HS and then boat to IG. This was just about as quick as it could possibly be, since there was a bus ready to depart when I got to the bus stop at 10:45 AND the boat captain at HS saw me coming and very kindly held the boat for me. If I had been just a minute or two later at the CSR bus stop, the trip would have taken much longer.

WS felt practically empty at 11:30. No waits at the festival kitchens or to enter stores. As I made my way counter-clockwise around WS, I didn’t really notice the crowds until I got to Norway. I was very glad to have grabbed a last-minute 1:50pm ADR for San Angel Inn, since there was a very long, slow-moving line to get into Mexico, most of which was in the sun. I skipped the line with my ADR and went straight in at 1:40.

If you’re wanting a light and inexpensive lunch at SAI, the tlayuda is a good choice.

Finished lunch at 2:40. TP said the line for 3 Caballeros was 3 minutes but they was no way this was accurate. The line was super short when I arrived at the pavilion (should have hopped in line before checking in for my ADR!) but had built up a lot while I was eating and it wasn’t moving so I decided to skip that one for now and headed to FW.

After taking some pics of the castle, I did HM, Ariel, and Pooh (plus a corn dog at Sleepy Hollow) in about 90 minutes. HM was a slow walk-on (never really stopped, but didn’t proceed briskly through the queue), Ariel was a brisk walk-on, and Pooh was less than 10 minutes.

I was going to grab a corn dog first thing, but the line at Sleepy Hollow was quite long at 7pm (surprise, surprise!). Did HM first and then circled back and there was no wait.

Bus back to CSR felt like the longest wait of the day! It wasn’t, really (about 15 minutes) and I was glad to get the first bus that came. By the time it arrived, there were a lot of people behind me that didn’t get on. I think it helped that I left MK at about 8:30 rather than waiting until official closing.

Total park hours: 8-ish
Total rides: 7
Total steps: Enough to be glad to get off my feet but fewer than most first days at WDW.
Total calories consumed: Zero. I’m on vacation.

I’ve been boycotting trip reports because I’m so bitter about not being allowed into the country, but CSR is my favourite resort of the ones I’ve stayed in and I’m scheduled to stay there in August.

I don’t know how I’d feel about an upgrade to the Tower. Are the rooms a lot nicer. I stayed in the cabanas section and adored my room. I liked the walk across the resort to get to it. And the view of the Tower from it.

I’ve stolen your photo of the China pavilion and will be passing it off as my own.

WOW, yay to the pixie dust! Beautiful pic of the tower!

I think the rooms are very nice. The bathroom is especially lovely (no joke!). I’ll post some pics later, along with some thoughts/opinions about what I love and don’t love about the rooms and the tower! 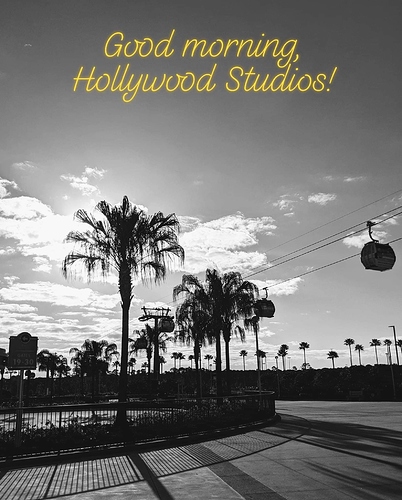 So, I have been fully rewarded for my deplorable lack of early-am practicing and did NOT get a BG for Rise this morning at 7am.

But it’s still a beautiful morning to be at HS and I’ll try again at 1pm!

Tapped into HS at 8:18 this morning and went straight to MMRR. The CM was telling everyone that the ride was down with no estimated time of getting up and running, so a lot of people bailed. I decided to chance it and only waited 8 minutes before boarding!

This ride is super cute and made me smile the whole time! I’m really loving these trackless vehicle rides… The little unexpected movements that coordinate with the story line are so fun! 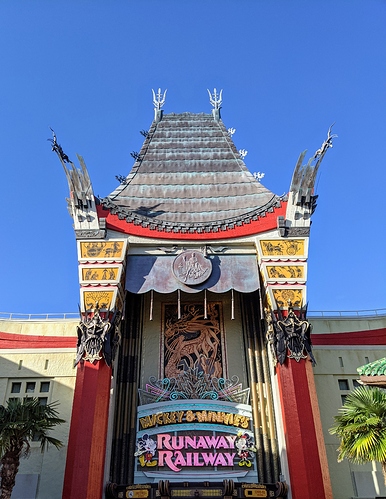 Got walked off a ride for the very first time today!

TSMM got stuck right before the final bonus round for a few minutes, then again after tallying my final score. Sat for almost 20 minutes before they finally turned on the lights and rescued us.

It really wasn’t that bad, except that this little dude was grinning rather creepily at me the whole time… 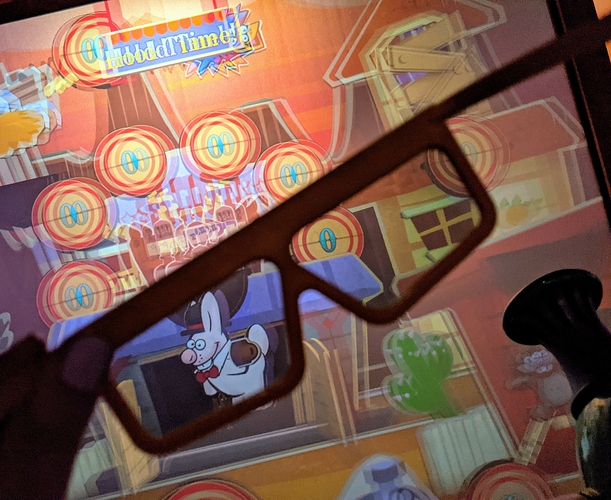