Does anyone have a problem using your Premier pass in DLR?

If you have a MB in WDW is there a card you use in DLR? Any other problems using the premier pass in either park?

I’m a DLR local that used to have Premier AP(expired in Aug). Used the card here, MBs on my last 2 trips to WDW last year. No issues either coast. 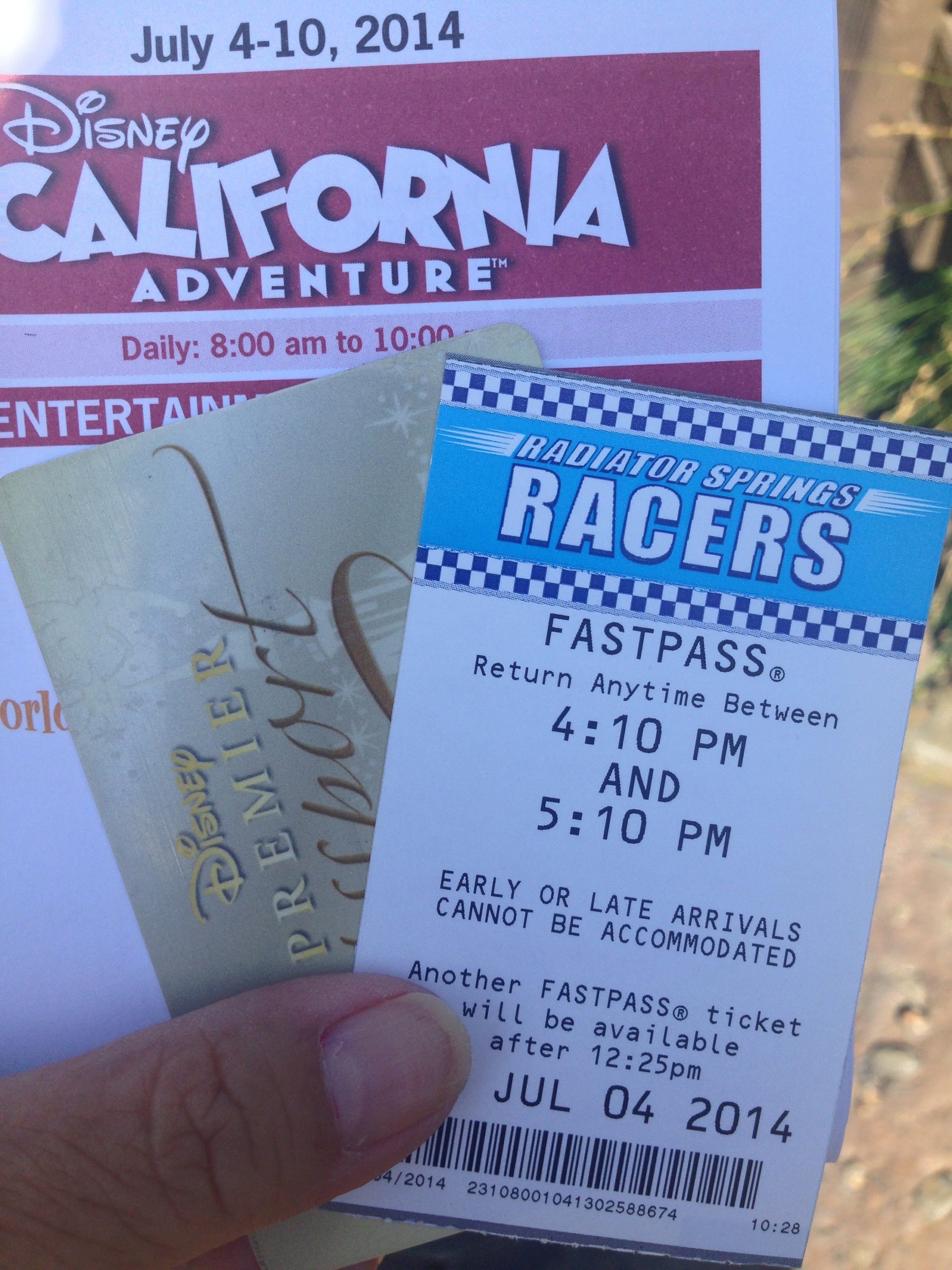 That’s good to hear! So can I ask a few more questions? When/where did you but pass? At WDW it DL? Before or after you purchased your package? Our WDW trip is first, then at least two DL trips. I have heard to upgrade in the park. Aldo I know it’s a pretty relative question but was if worth it to you? Thanks for your help!!

I know that both Len and I experienced Premiere Passport problems. so your mileage may vary.

I later returned to DLR, where my Premiere Passport never again worked. A supervisor pulled me aside at the turnstile and issued me a 1-day hopper for the day, telling me that she’d email WDW to having something done. The pass didn’t work the next morning (delaying my park entry again!), so I went to Guest Services, which also could do nothing to fix the pass. I only had a few more active days until my pass expired, so she gave me a 3-day hopper to cover that time period, which was fine except for the fact that my Premiere Pass still didn’t work for discounts. Fortunately, my wife’s Premiere Passport (obtained at DLR the same day as mine) worked fine for everything (including park admission), so we could use hers for the discounts.

My hope is that Disney Parks, as a whole, will get better at handling the Premiere Passport. My sense is that training on them isn’t great, and that there are some manual processes necessary for them to work. If those processes are performed properly, you’ll be fine. If not, it’s frustrating to having a $1000+ ticket fail with no one able to fix it.

In contrast, last year I had nationwide passes for both SeaWorld Parks and Merlin Entertainment (LEGOLAND) and used them flawlessly at multiple parks in mutliple states. Of course, these companies actually have the same turnstile technology at each of their parks.

I’ve had the Premiere for at least 3 years, purchased in Aug at DL. The 1st time I used it in Epcot, pre MBs, it wasn’t accepted at turnstiles. Had to go to guest services where they had to activate it even though I used it at DLR. So agree with David, wish they would make it easier in handling so no one has issues. Sometimes at DL cash registers, Premiere wasn’t accepted when they swiped the card, so CMs had to enter card # manually. Usually go to DL at least once a week, past 3 years WDW at least 2x a year. It’s great at DL where you get more food & merch discounts. I’ve downgraded to DLR Premium as I don’t have any WDW trips planned. But will get it again as I usually do 10 day trips to WDW.

Thanks! I am so torn as what to do. Of course I would like to save money…and we tend to spend a lot on souvenirs, food etc. (We live in Northern CA and have DLR scheduled already for at least 2 times next year and WDW for 12/21/14-12/30/14) However, my husband is impatient (even when saving money) and I’m not sure if it will be worth the hassle during the Christmas crowds. If I had to wait 20+ minutes each day it would definitely make the $1000+ ticket seem even more expensive. Sometimes I wish I had someone to just make these decisions for me…

In the past there hasn’t been a savings vs. buying 2 separate passes. Have you run the numbers?

This thread got me curious since I have trips planned to both coasts for 2015. The Premier Passport is $1029. To buy both separately would be $699 for DLR/DCA and $803 for WDW, totaling $1502. You could forgo the water park option but that would still put you at $1374. Or you could buy the cheaper DLR pass with blackout dates for $519, which if combined with the non-WP option at WDW, would total $1194, still more than the Premier Pass, but with significantly less benefits.

For me, the individual ticket cost (with no PH or WP options) for my three currently planned trips is $738. Adding in the PH/WP options, the price goes up to $992, which is awfully close to the $1029, a difference that could easily be made up for in discounts in a short amount of time. But I neither park hop nor regularly go to the WPs, so it makes that option, while definitely a good deal for those who do use those added features, less attractive for me.

It’s also possible that buying the pass just for one coast or the other might make sense. I am planning two trips to WDW, with a base ticket price totaling $512 compared to the AP of $675. I might be able to make up that difference with discounts, but I am not certain. I would like to take advantage of TIW, but that adds another $100 to the cost, meaning that I would need to realize $263 in savings in order to just break even.

Not sure if this will be helpful to anyone else, but doing the same math might help you decide what to do. Of course, the math does not account for things like hassles using the passes.

Wow. I’ve been buying my passes at renewal and DVC rates - those have really gone up - especially DL, which I haven’t bothered with in a couple of years.

That is a good point - renewal and DVC rates will be different and, therefore, change the calculus. I don’t have either option.

And - the other factor that I forgot to add that is both a cost and benefit with an AP - easier spontaneous trips! If I had an AP, I might just hop on a plane or make the crazy drive! But to say that would “save” me money is crazy, lol. But the extra fun might be worth it.

Thanks for all your help and advice. I’m not sure why I am so fixated on this Premier pass thing…other than I just want it!! & I love discounts. I am pretty on the fence if it pencils out for me…I will run the numbers again and account for our other plans such as my spa day etc. PS I hate math, which is why I posted so someone else could do it for me. Thanks again!

I’d be happy to do the math for you if you tell me the exact number of park ticket days you are planning on purchasing and whether you want add ons like park hopper and water parks for WDW. Also, your DLR dates will make a difference - if they are black out or not.

I had a few initial problems, similar to what David described. Bought and used my Premier Pass at DLR, then tried to link to MDE for FPP reservations a WDW. The CM said I needed to go back to DLR (from Seattle) to reactivate the card. I explained that though we’re both on the west coast, there is still significant distance, and it wasn’t going to happen. I had a polite fit, and after about an hour on the phone, it was fixed, and she made all of my FPP for me on the spot. I plan to renew again this year - and trying to work up a rationale for upgrading DS4 DLR pass to Premier.

Can someone confirm if this is correct. I can only do the Premier in person, and cannot do monthly payments. So we will renew DL AP as usual with payments, then I will need to go to a ticket booth and pay the full diff to upgrade?

That’s what I did, except did both renewal & upgrade at ticket booths.

Have Premier pass and Magic Bands. No problems encountered yet either coast.

Renewed my Premier passport at DLR a few weeks ago, and am once again having trouble linking the ticket to MDE. So frustrated.

We have AP for WDW which expire on April 19th (first year having them). We will be in WDW a few weeks before expiration. We have a trip planned for DL in June (5 park days) and tentatively another 2 in WDW in Oct 2015 (4 days) and Dec 2015 (4 days)’ and most likely a Feb or April 2016 trip adding another 8 days. I wanted to get the Premier pass for I think it will be beneficial given the trips this year, my question is should I upgrade in April ( when current AP expires) or let it expire and just buy Premier in June when at DL. I don’t know if the discount (what is the discount can’t find it anywhere) for not letting it expire is worth the extra time (April through June). Hope this ? makes sense.

Hi! There is no discount for Premier pass, so I would do whatever is easier for you. You probably know that you have to purchase the Premier pass in person, not over the phone or online. Sounds like you have a fun year ahead!!

I was at WDW for marathon weekend plus a few days (also I live about an hour from DLR). I bought my premier pass when I first got to WDW and the CM linked it to my MB right then and had no problems for the 10 days that I was there. Once i got back to So-Cal, i went to DLR and got stuck at the gate because the system here did not recognize my pass. I had to wait for a supervisor to come and solve the problem. The CM told me that WDW does not link their premier pass with the computers at DLR, but DLR does w/ WDW when they sell them here. He had to report the problem to an office at DLR and it was taken care of the following Tuesday (since I was there on a Sunday and Monday was a holiday). Needless to say i was a little upset after spending about half an hour waiting to get this fixed. But the CM that I was dealing with gave use a “paper”" 3 day park hopper ticket to use for the weekend. I have not had any problems since.