DD20 and I are waiting to disembark after our 3 night cruise on the Wonder. Question. Is disembarking always a mess? People are lined up and waiting but they are only letting a few off at a time with big gaps in between. Our flight isn’t until 1:45 so we’re just hanging out up above for now. Line stretches back to Tiana’s Place. 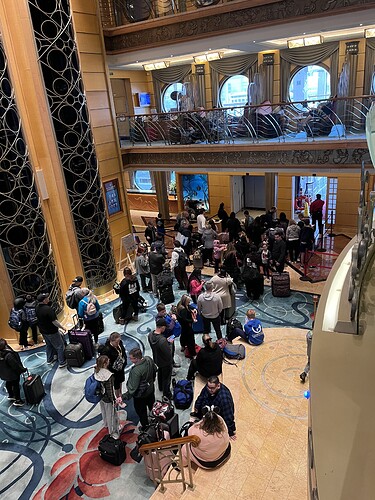 You gotta rope drop something, don’t you?

We flew into San Diego on Friday morning. We had a great view on the city and the Wonder from the plane. We were super excited. 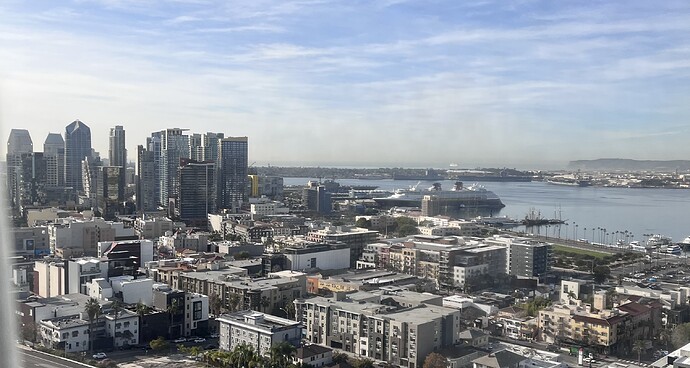 Unfortunately, we had two hours to kill before boarding at 12:15. We found a Starbucks across the street and sat outside to snack and admire the Wonder. Finally it was time to board. We walked over and took some pics of the ship before boarding. Boarding was fairly efficient and painless. Especially compared to disembarking! 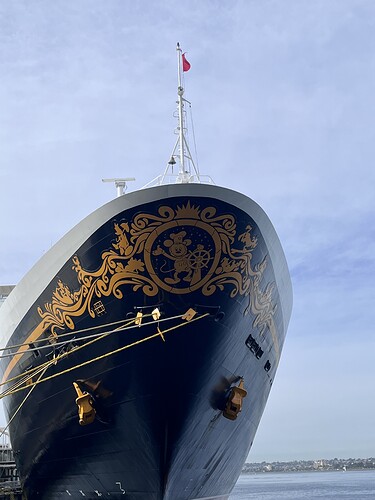 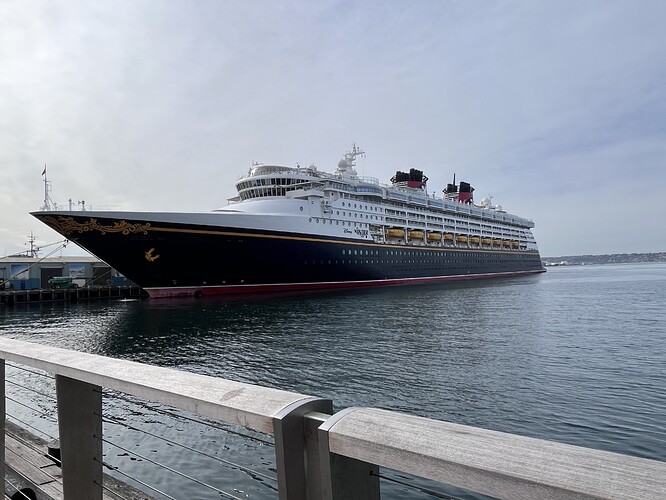 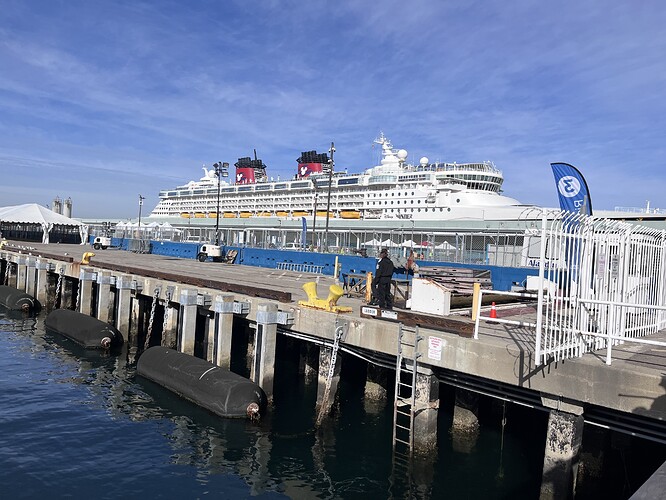 Is disembarking always a mess?

Yes. My advice is to take your time with breakfast and then find a cozy corner to hang out in (I hung out with some friends near one of the cafes that was open) and let the insanity diminish. Unless you’re in a particular hurry, there’s no point in joining the madness. Think of it like hanging out on Main St after fireworks to let the crazies get out of the park first. Then it’s not so bad.

But it’s going on 11:00! I’m pretty sure they have another cruise to board at noon!

We’ve been hanging out but finally joined the line. Someone said they heard it was an issue with Customs. Like not enough Customs agents to process the passengers.

Not always, but it’s not uncommon.
Best case is retain all your own luggage and go earliest walk off.

Too late for that now though.

I can’t wait to hear all about it. I’ve thought I’d you all weekend!!!

Speculation that it could also be related to the federal holiday.

We’re almost to the atrium. I feel bad for passengers boarding today. They’re going to be delayed!

We had the late breakfast, ate at a leisurely pace, took some pictures, and then disembarked from the Fantasy in October. The foyer was empty when we left the ship around 9:30.

Spoiler alert. We didn’t love the cruise. However, I did book a placeholder, so we didn’t hate it either. Still debating when, where and if we’ll try again.

The biggest issue for me was the cold. I was freezing most of the time. My dreams of lounging on deck reading and watching the ocean were dashed. I did lounge with a blanket and for a fairly short time. 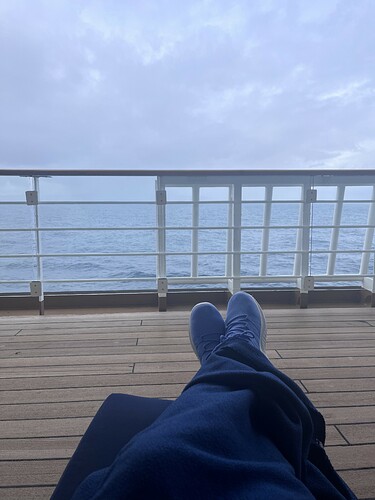 The weather was cloudy, too cold, and it rained more than once. I didn’t even consider swimming, but DD20 did swim once and tried the slide. January can definitely be cold in SoCal so this shouldn’t have been a surprise to me. Unfortunately this was the only sailing that worked with DD20’s college schedule.

Definitely need to plan for warmer weather next time if at all possible!

That kind of weathe rwould definitely put a damper on things

It’s the very reason I don’t think I’m a candidate for an Alaskan cruise. When we went to Disney World in November 2019, it was almost too cold to enjoy myself a few of the days.

I do think three day cruises are a hard way to start. The whole first day is kind of disorienting. At least it is for me. Even after six cruises.

I look forward to hearing about your dinners and animators palate!

I was freezing most of the time

You are probably more of an Atlantic cruiser than a Pacific cruiser. And likely only in warm weather months! The Pacific in January is never warm.

The Pacific in January is never warm.

Neither us the atlantic

Yes! This is probably correct!

Where/when is the placeholder cruise?

I will be on that same cruise next October! The weather should be a bit warmer then that it is now, though I’ll be prepared for whatever.

We chose a 3-night cruise because we really just want to try cruising out before we fly across the country and take a more expensive Caribbean cruise. We’re mostly looking forward to the dining, the kids’ clubs, the theater shows, and the spa, moreso than lounging on the deck. We’re not even planning to disembark at Ensenada (seemed lackluster to me). But when we go on a longer cruise out of Port Canaveral, the beach / Castaway Cay and the aqua coaster will definitely be a huge part of the draw.

The Pacific in January is never warm.

True. It’s also rougher seas. Fun fact, they don’t really surf in the Caribbean cuz no waves. But they sure surf in California and Hawaii!

I was really surprised by how much motion we felt on the ship. DD20 was feeling a little green the first evening. I think part of it is the Pacific. Part is that the ship moves faster that first night to get down to Mexico. Coming back is at a more leisurely pace and the motion wasn’t nearly as bad. The first night I felt like I’d been drinking!

But the sunset as we departed San Diego was amazing!

(I’ll have to load pictures later. Plane WiFi is bad.)