Disappointed with Disney Floral and Gifts

We just got back a few days ago from WDW and had a great time. Boy were we exhausted though! I’m still catching up on my sleep deprivation.

Everything went as well as can be expected, but I did have an issue with Disney Floral and Gifts. For our 25th anniversary, which my DW and I were celebrating at CRT that evening, I ordered the “Create a Fairy Tale” item (glass slipper and a tiara on a bed of carnations) to be delivered. I ended up getting the “Once Upon a Time” item, which is the same but doesn’t include the tiara. I had placed the order over two months in advance.

I know most Liners probably are like me - very meticulous about planning every detail. So when I saw the tiara was missing, as you can imagine I became a bit stressed out.

I privately asked our server, Gustavo, if it would be coming later. He checked and found that the tiara had not been delivered at all. I asked if there was anything that could be done - figuring that perhaps they could call DFaG and arrange for them to rush it over. The solution Gustavo and the manager offered was to provide me with a replacement they happened to have on hand, but they said they would need to charge me $37.00 for it. I agreed to this, since I really wanted to give my DW the tiara. (During our tour of WDW my DW commented on how pretty the tiaras were whenever we’d see them. And right before dinner we were browsing around in Castle Couture, and she half jokingly suggested that we should get a tiara - one of the relatively inexpensive ones for children - that she could wear to dinner. So I needed to discreetly change the subject each time, and I was really excited that I had arranged for her to be hand-delivered a tiara on a bed of carnations.)

Unfortunately, not only was the replacement tiara more money, but it wasn’t as nice as the one that I had originally ordered (at least based on the picture on the DFaG site). But I was happy that Gustavo went to the extra effort for me, and I figured I’d work out the details with DFaG later.

While he was getting the tiara, I stepped away to try and call DFaG in the off chance that they could still take care of the issue. They were closed. In the meantime, the replacement tiara was delivered to our table, and I missed my wife’s reaction. I also missed three of the princesses coming to our table (but they came back).

At the next opportunity I had, I again called DFaG. They apologized and offered to credit me back the difference between the two items ($32.00). I said that would be fine, but I asked if it would be possible for them to ship me the tiara instead. (At this point, I kind of really wanted the tiara rather than the money.) They didn’t know if this was possible, but they took down my address just in case. I guess I’ll find out their resolution when I either receive the tiara or see the money refunded back to my credit card. I did explain to the DFaG rep that I needed to purchase a replacement for $37.00, but she said that they wouldn’t be able to refund me that amount unless they did a thorough investigation with CRT to find out exactly what had happened. (Good grief!

In talking with DFaG, the rep happened to mention that if CRT was aware that part of the gift was missing they could have simply called them, as they always have someone there until late and that they would have been happy to rush the tiara over to the restaurant, which would have taken about 15 minutes. This would have been a perfectly acceptable solution to me, but evidently the manager of CRT was not aware that this was even an option. After we got back, I let Disney’s guest services know about this matter, and I received a phone call from them within 72 hours as promised. They apologized for the issue and said that they would address it with the management of CRT.

I understand that mistakes happen, and I can generally just overlook them, but I have to admit I am still a little disappointed with the situation and with how it was handled by WDW and DFaG. Admittedly, my opinion is probably affected by the fact that I work in customer service myself and also for a gifting company. If we mess up on someone’s order, we not only let them keep what they received but we ship the correct one to them or provide them a full refund. In fact, sometimes we’ll do both. Not that I was necessarily expecting them to do this, but I thought that - considering the stress and aggravation their mistakes caused to one of their guests - maybe they would offer something more than the exact amount of money I was overcharged.

On the positive side, my DW - who was not aware of the fact that I had planned this out a couple of months previously, that the price of the order was nearly $400 with the delivery fee and tax, and that I was stressing out in trying to figure out a solution after we were seated - was really happy with the gifts. Since we returned, she’s been bragging to everyone about how she was treated like a princess. (I think I’ve inadvertently created a lot of enemies among the husbands in our circle of friends.

So I thought I’d vent to my fellow Liners, as I am sure that I might receive more sympathy here than I did from WDW or DFaG.

Of course, this hasn’t turned me off of WDW completely. We still want to go back the next chance we get. And I would still recommend CRT to anyone who is interested. It was amazing, and I’m glad we did it. I am hoping, though, that maybe by posting this information I will help others to know how any such issues can actually be handled should they happen to anyone else. 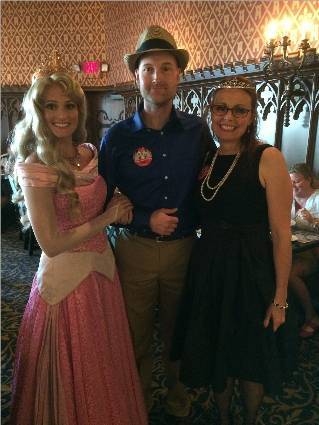 Aw, you are a very sweet husband. Your wife is lovely in her tiara. I totally get wanting it to be perfect and exactly what you paid for. I’m sorry you missed some of the experience messing with customer service.

Thanks for sharing your story.

Insert commiseration here: <*>
I absolutely, totally understand. Especially since WDW has set their own bar so very high, it’s extra ultras frustrating when they miss the mark, then appear to be struggling to fix it.

That’s surprising. Disney usually (though not always) does more than required to address problems during a guest’s stay. In this case, the person you talked with seemed more eager to blame someone else than to help.

I would be disappointed and upset as well. Especially with the price tag. I am glad it turned out to have a happy ending that she got the tiara. Especially since she was looking at them. Such a beautiful gesture, I love what you did for her. As to your friends being upset at being super upstaged, so what, you wife is a treasure, that deserved to be spoiled, but now you set your own bar rather high to top next time.

Wow, @RobertSch6, that was an incredibly thoughtful and romantic surprise you planned for your wife! She looks absolutely glowing in the picture you included! I’m glad that she feels like she was treated as a princess and I’m glad a tiara was produced for the dinner. That said, I understand and agree with your frustration over how the missing tiara was handled. I hope they will reimburse you fairly!

I wanted to write a follow-up post on what has happened since my original one.

Disney Floral & Gifts did provide me with the refund as promised. I decided just to write them directly and let them know about the experience. I felt it was appropriate to give them a chance to respond before attempting to escalate the issue.

Jeanne from DF&G responded within a day and apologized for the problem and for their error. She said that she would like to send my wife something extra special. I let her know that that would be fine, so she overnighted the gift. They sent her a really pretty Frozen bracelet and a picture frame. My wife absolutely loved them. She’s already worn the bracelet, and we put one of our MM pics from WDW in the frame.

So Jeanne was able to turn the bad experience into a magical one. It was actually much more than I was expecting. My confidence in Disney has been restored.

I was so happy to read this! Yay for Disney standing behind their service and turning your bad experience into something positive. Thanks for letting us know! Glad your wife is happy with her new gifts!

This makes me happy. I’m glad to know that they were able to provide a wonderful resolution for you.