Guys, I am having major post-trip food cravings right now. Like, really bad. (No, I’m not pregnant, in case you’re wondering . . . just hungry.

I know I can’t be the only one, so it’s time to 'fess up, people! What WDW foods do you seriously crave for weeks, months (or more!) after a trip?

For me, those pesky Dalkey Duo Sausages at Raglan Road are annoyingly hard to get out of my mind. Three trips in a row now, I have trekked over to RR for these little beauties.
And the Irish music and the dancing, obviously . . . but mostly the sausages. I reminisce about these at least weekly, if not biweekly.

The surprise of my most recent trip, however, was FRUSHI !!!
Oh. my.
I had no idea when I ordered frushi at the F&G festival last month that I would crave it every. single. day. after my trip. The fact that I ordered it no fewer than FOUR times during my trip (including one day when I changed my entire day’s plan around so I could go back to Epcot and trek all the way around WS to Japan just for one last plate of frushi) should have tipped me off that I was dangerously close to being hooked for life. The warning signs were there, and I ignored them. Now there is no turning back.

Honorable mentions include cobb salad from HBD and fried green beans from Y&Y. I may or may not have eaten an entire plate of those all by my onesie last month. (ahem)

The allergy dessert at BOATHOUSE.

My fiancé and I still talk about the cream cheese filled pretzel we had on our first morning at HS on our 2015 trip. We never found it again after that first day so I already have my list of places where we can get it when we go back for honeymoon next year as we definitely could have eaten that every day.

We had so much yummy food there but this is just the one item that stayed with us the most!

The beef bowl at Satu’li, with rice & black beans and the black bean vinaigrette. I had it twice in May and will definitely be having it again in September! Luckily my DD is hooked on their quesadillas, so she’s just as keen to go back as I am…!

What the heck is a frushi?

Dole Whip floats and carrot cake cookies! My husband still regrets that he wasn’t paying attention when I ordered my cookie and missed out. I did give him a taste of mine. 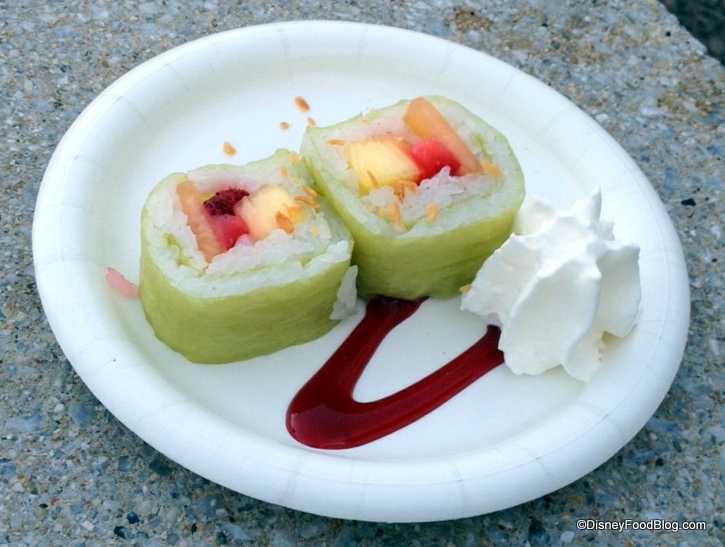 Fruit sushi from one of the kiosks - pic from Disney food blog.

And … rice crispy treats (there’s nothing really special about the disney ones, but I like being at the confectionary store and they now remind me of it).

I can’t eat dairy, and this year I appear to be having issues with gluten, so I miss out on all these fantastic treats. I have to say, on vacations like this it really sucks.

Hmm. Honestly, I can’t think of anything at Disney I’ve ever eaten that I’d crave that I can’t get elsewhere.

For example, one of the all-time best brownies I ever had was at Starbucks in Epcot. But, you know. I just have to go to a Starbucks when they have them.

This, although I blamed it for giving me digestive distress the following day.

Also: the meal I had at Le Cellier, although I’ve decided not to go back there this year.

Dole Whip. My entire meal at Jiko and Tiffins, bread service from Sanaa.

My hardest time is with suddenly not eating all that sugar when we get home. It seems my body gets used to sugar, and does not like to function less. I never gain any weight while at WDW, but the adjustment back to sensible eating is SO HARD!
On the bright side (I think?) last evening I found a place, not more than 15 minutes from where I live, that is serving Dole Whip Floats. Real Dole Whip, with real Dole pineapple juice!!!
Is it good news or bad news that I can get my fix any time I want to?

Ugh. Now I’ve got ADR finder running trying to get a me a ressie for Le Cellier.

You are so lucky you are going solo. I am so envious.

Chip’s Sticky Bun Bake from Garden Grill. I attempted to make the recipe once and it was a dismal failure.