Okay…so when my wife and I chose going to WDW for our 25th anniversary, we specifically chose December so that we could experience Christmas Disney-style…something we’d never done before.

Well…it appears our trip will not be QUITE what we had hoped for. With fireworks parties out of the mix, for example (and most likely fireworks entirely, unless Disney pulls out some magic real soon), we still want to make the most of the Christmas experience.

Of course, it is too soon to know for sure what it will look like. So there is a bit of conjecture in this.

But, one thing we wanted to do was resort hop to see the decorating at the resorts. Provided we can do that, the question really becomes to which resorts are likely to have decorations worth seeing?

We REALLY wanted to see Animal Kingdom Lodge (not just for the Christmas decor), but it looks as though the chances of the main building being home are slim to none right now. Kidani Village is the only part open, and Jambo House, which has the main lodge building, isn’t going to open it seems.

Does the smaller building for Kidani Village generally have Christmas decor worth seeing? And even if not, is there enough beauty in the Kidani building to worth a trek?

It appears Grand Floridian will be open, so that’s a definite. We’ll likely monorail around from the Contemporary to see GF and Poly.

Next comes Wilderness Lodge. Technically, there is no opening date for that…but Boulder Ridge and Copper Creek are open now. Does this mean the main lodge building is open, and would we then be able to assume it will be decked out for Christmas?

We know we could figure out how to get to Old Key West, although as I understand it, they don’t do a whole lot for Christmas? What about Saratoga Springs?

Beach Club/Yacht Club isn’t an issue, since we are just a walk away from it staying at the Boardwalk.

(Again, I am assuming Disney plans to pull out the Christmas decor where they can!)

Hopefully the Christmas Tree trail will be done at Disney Springs, and the parks themselves will have some decorations about.

The biggest unknown/hope is revolving around the Christmas party. In many ways, I think Disney could pull off the Christmas party in a modified form. (Since we’ve never been, ANY form would be fun for us.) I keep hoping for there to be rumors suggesting one thing or the other, but nothing so far. The best I’ve found is the conjecture that Disney only released park hours for November through the 7th because they wanted to hold off as long as possible to make a final decision…suggesting they WANT to have the parties, but need more time to fully decide. What reasons? Maybe just looking at numbers, fear of cancellations, etc? Then again…it seems like HAVING the parties would give reason for people to come who might otherwise consider cancelling. So, crossing our fingers that we will be able to get to experience a Christmas party.

The other long-shot hope is that Disney does, in fact, figure out how to bring back some fireworks before year’s end. I had briefly help out hope that “Project Nugget” was indication this might happen…but it looks now more like Project Nugget just being preparation for the fireworks they plan to do for the 50th anniversary celebration.

Anything else related to Christmas that I’m not thinking of you’ve experienced at Disney which may (or may not) happen?

I have never been to Disney during at Christmas time so I really have no input.

I love Christmas soooooo much and I love Disney sooooo much that I fear I am not emotionally stable enough to experience that much joy at the same time. I would burst.

(Yes, I’m being dramatic. Yes, I added an obnoxious amount of o’s)

Our actual anniversary took place during our family trip…but originally, it wasn’t supposed to be. And originally, we decided NOT to have our anniversary trip ACTUALLY on our anniversary because it is too hot to go to Florida in August. I mean, no sane person would ever do that! Anyhow, August 5, we celebrated 25 years together. In December…we’ll just celebrate it more!

That’s phenomenal. We were there 2 years ago on our actually 9th anniversary and wore the buttons 1 day and actually received WAY more attention from those buttons than any other we have ever worn. (congtrats shout outs, free desserts…) It was such a fun day.

Next comes Wilderness Lodge. Technically, there is no opening date for that…but Boulder Ridge and Copper Creek are open now. Does this mean the main lodge building is open, and would we then be able to assume it will be decked out for Christmas?

The actual lodge building itself is open, this is where the Copper Creek villas are located. And Whispering Canyon cafe is also open. So if they do decorate, this should definitely be at the top of your list! There is a separate lodge/lobby for Boulder Ridge that might be worth a looksie if you are already there.

I’m sure WL will be fully decorated. Copper Creek is in the main building, so the lobby is fully open.

Kidani is always worth visiting for the animal viewing alone, albeit things are on a smaller scale than Jambo.

I don’t think Saratoga is worth a special,visit, unless you want to eat there - I love the Turf Club although it isn’t open just now.

I think Jambo is open now. We accidentally got dropped off at Jambo instead of Kidani by our ME driver. It was 1:00 AM Florida time but the lobby was open! The shops and food service are not open. But Jambo and the pool are open. I don’t know what this means for Christmas decorations, however.

I think Jambo is open now.

Oh! I guess I thought it was only open for the NBA or something like that. Guess I’m confusing that with something else. This is good news, then, because it means all the more likely they will decorate for Christmas.

The Christmas decorations for the Poly are minimal and kinda underwhelming… Some poinsettias and a “tree” made from them are about it.
Might as well go if you’re already on the monorail, but don’t get too excited.
I’ve read that Beach Club usually has a cute display, but I’ve never been there are Christmastime.

So Jambo is “open” in that people can book the DVC rooms.

Other than the pool, literally nothing else is open. No store, no lounges. A skeleton staff. The only reason they opened at all is because of the legality of keeping it closed as a DVC resort.

Unless it opens for regular bookings, I think it’s possible they may not decorate there. They are clearly not wanting people to be there at all.

Beach Club and Yacht Club are actually my favourite, even more than WL! Very, very cute, and the BC feature (no spoilers) is better than the GF gingerbread house IMO. It’s incredible.

Ummmmm, you were there anyway​:rofl:

@ryan1 Happy Anniversary!! 25 years, wow, ur wife is in our thoughts and prayers

My DH and I will be there the week after thanksgiving. I could technically be celebrating my bday and our 17th anniversary but really Im in it for Disney at Christmas and hopefully lower crowds. I didnt think about resort hopping. This may be what we do one evening. I am ok with no fireworks but I do hope they try to bring back SOME of the extra entertainment to make the season more special. I guess only time will tell…

We were there 2 years ago on our actually 9th anniversary and wore the buttons 1 day and actually received WAY more attention from those buttons than any other we have ever worn.

Im going right around my bday and our 17th anniversary. I will have to alternate buttons and report back with the reception from CMs!

alternate buttons and report back

you were there anyway

25 years, wow, ur wife is in our thoughts and prayers

It is actually worse than that. 25 years of marriage. But we were friends for 7 years before we got married. That’s 32 years of putting up with me!

There used to be different Santas around the World at Epcot. Now?

The Santas, and drinking or eating around the World we’ve never accomplished entirely because we get behind, spending too much time in various countries.

One of our extended family trips was my sister’s birthday and mine and DH’s 45th anniversary.
Anniversaries do seem to get more attention than birthdays.

I do agree, if Disney can figure out a way to do their Christmas specials, they’d likely get many more bookings.

As for fireworks, with parks closed, it’d certainly be possible to determine areas to set off small fireworks shows with maximum lines of sight from in use resorts.

You have all the headliners on your list. I truly hope you can enjoy them all and without the MASSES of humanity around!

We were in WDW last Christmas for our 25th Wedding Anniversary. We were there 16 days but it was just DH and I for the first 6 days. That’s when we got most of our decoration viewing done. My biggest recommendation is to take the time to enjoy the ambience and details rather than to have to “see it all”. We enjoyed the Christmas Tree Trail. We did our resort tour over a few days, especially since we were staying off site.

Our first night, we drove to Wilderness Lounge and had dinner at Geyser Point Lounge. The bison burger is excellent!

We chillax outside the Lounge, facing the water and got a partial view of MK fireworks. Shortly after, we got to watch the Electrical Water Pageant. This was fabulous.

We also went to watch the geyser go off on the hour. This is our favorite resort.

We went to MVMCP two nights, since it was our first time and we may not be back for Christmas again. It poured on one of the 2 nights. It was sooooo crowded the night it didn’t pour! And it was soooooooooooo hot! We did not dress up for the party so you should dress up if you go.

I think you are AP with Memory Maker. We went 3 times to the PhotoPass studio in Disney Springs to take “studio” pictures with a green screen. They aren’t great at posing. That’s why we went three times. We only got 2 good shots out of them all.

Our favorite anniversary pictures were actually taken at MVMCP. 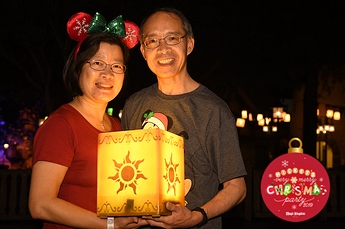 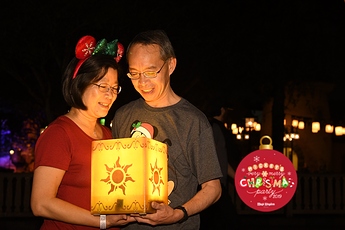 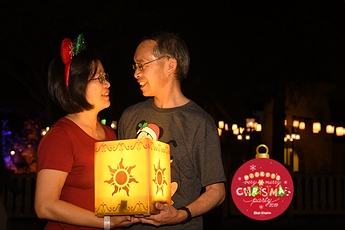 We did a dome cake decorating class at Amorette’s. We really enjoyed the class and the cake! 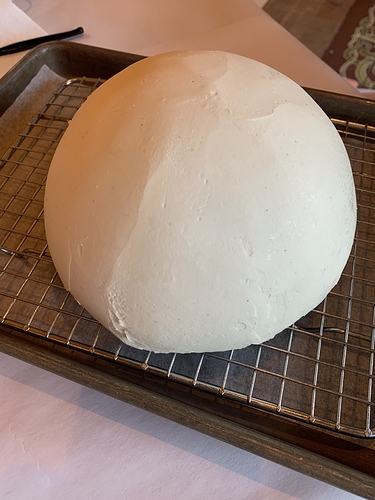 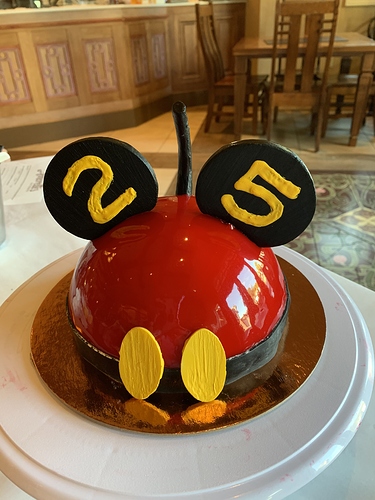 We toured all of the Deluxe Resorts to gawk at Christmas Decorations, along with Swan and Dolphin. If I were to do the resort tour again, I would do GF, Boardwalk, Yacht Club, Beach Club, Wilderness, AK Lodge, (only if we were doing the free food tour there), and maybe Contemporary. I would skip Poly because there really isn’t much there. It just takes time to get around. We also got to see Port Orleans and Coronado Springs because we went there to eat. The decorations at Port Orleans were themed but not at Coronado Springs.

DH and I loved looking at all the stuff in the Christmas Tree Store in DS.

Along the way, we photographed all the giant Christmas Trees.

I hope you get to go to celebrate your anniversary at WDW and that Disney will host a magical Christmas, without the traditional massive crowds.

Thanks for sharing. Sounds like a great trip! And some great ideas!