Can We Talk About Airport Transportation Options?

I just sucked it up and will do round trip.

So I figured that I didn’t want to use Mears. It was going to take too long and if I am paying for it I don’t want to waste any of my time.

Next would be Uber/Lyft. While it can cost as low as around $40 each way, it could also be more …and after our negative Uber experience in October w/ the driver who circled property twice driving us from Disney Springs back to DHS (including the parking plaza for MK!!), I don’t want to chance it too much. (In the end I had to take out my phone and use Google Maps to guide the driver to the Uber drop off spot for DHS!

My compromise would have been Quicksilver there and Uber back, but by that point I could be saving $30, but possibly nothing.

So I just decided it was easier to have it planned and not leave my transportation up to the whims of possible surge pricing.

Hmm, this “ad” is on their homepage but I don’t see any pricing that low on their Rates & Quotes page. 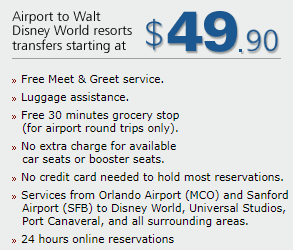 $150 is the least expensive round trip from the airport listed.

There is generally a coupon (but not that much).

Yeah, I got the coupon and then didn’t see an obvious spot to enter the code. After the fact I READ the email w/ the code and noticed the instructions as to where to put the code.

If anyone is considering Quicksilver, do not delay.

I had booked with them (and since cancelled) but they had no towncar and could only offer me an SUV which was a substantial price increase. He said they are booking up very fast right now. I suspect that will only get worse as people realize/remember there is no DME for their post Jan 1 trips.

I am going to call them today to ask about the $49.90 ad and see if they can add my coupon.

How far in advance do you suggest?

As soon as you know you’re going honestly

I booked my February trip. I know I am giving up the ability to apply a coupon but I wanted to be locked in.

I emailed about a question I had about the price of my Quicksilver booking. Something interesting that they said in response was that they are going to be increasing the prices again very soon. 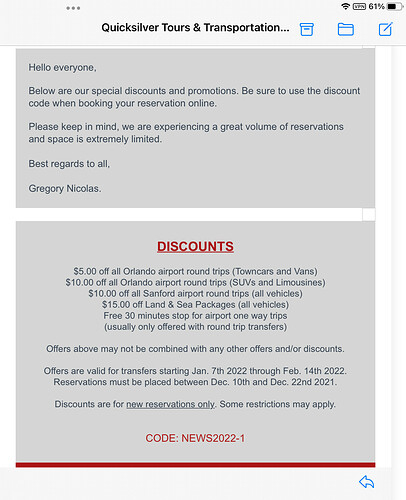 I like the idea of a grocery stop. Great info in this thread!

For anyone who has used quicksilver, how early do they pick you up ahead of your return flight?

I always add in the notes what time I want them to pick me up.

Did they tell you the time before the trip or once you were there. I booked my pick up, but forgot to look at the fine print

They call you the day before each way. They give you the driver’s contact info too.

It was in my confirmation email after booking. On their site, it says 2 to 3 hours ahead of your flight.

I notice that they’re offering MCO to UOR, UOR to WDW, and WDW to MCO for $225.
That doesn’t seem quite the deal I thought they offered… is it?