OK, I know the POLY opens officially on July 9th, and the bus system is USUALLY a good system. HOWEVER, just a quick heads-up, you may want to ride share more often than not.

DVC people are still here, and folks like us who got an amazing deal to stay at a DVC room for a couple of nights.

The bus system looks to me (and more importantly, my husband, who has worked for a transit agency for about a decade) like it is transitioning to another management system. Maybe Myers, not sure.

But it is ridiculously hard to find a bus. The online bus times resort thing in MDE seems to have disappeared, and the normal level of professionalism, courtesy, “magic”, and Disney transportation management on walkie talkies moving people along, busses into service when the night is coming to an end (or after a major, scary thunderstorm) is non-existent.

We bustled thru the rain, waiting at Epcot for a bus to the POLY, for almost TWO HOURS. We got back to our room around 8:30pm. The same driver that loaded a bus filled with (2) wheelchairs, their large families, and a few other people, was the SAME driver to come back to finally pick up our group. He seemed like he didn’t work for Disney, in our opinion. He was slow, and confused, and the ONLY driver between Poly and Epcot.

He dragged the bus (in kneeling position) to the POLY bus stop. We thought the sound was the loud scrape of an accident… Couldn’t get off the bus fast enough.

Look, I know this sounds like a Karen complaining. There are SO MANY holes in the Disney bubble at the moment. We are going to avoid the bus system as much as we can. We don’t have a lot of options, other than walk to the TTA and figure it out from there. Monorail Is still not running to Epcot from MK. Lighting? No skyliner. That’s a safety thing, I get it.

Japan shop in Epcot? Scarce… Feels like a going out of business sale… On a Monday. The parks are BUSY, there are limited reservations available. Epcot is just under construction walls everywhere in future world

I see people being rude to cast members, who are not getting a lot of opportunities to earn tips, less tables. restaurants, heat is making people a little nutty.

Doc Ondar’s was even light on Lightsabers… It’s so sad.

Reservation system is such a pain. Don’t get me started, it’s wonky and I take screen shots of our reservation numbers and visit Consierge or guest services regularly.

Do yourself a favor - they are about to let people go mask free. Push your trip. They DON’T have enough staff, stock, transportation, and frankly, magic. It’s not sour grapes. We paid SO MUCH MONEY for a summer escape, bucket list POLY trip, and it is going to have to focus on the resort (again, under construction) for fun and relaxing, because I will Never Put this much down for the current state of WDW

Here’s a parting pic of the tops of busses AT GRAN Destino from our split stay this morning. With we had stayed there instead for the full trip. 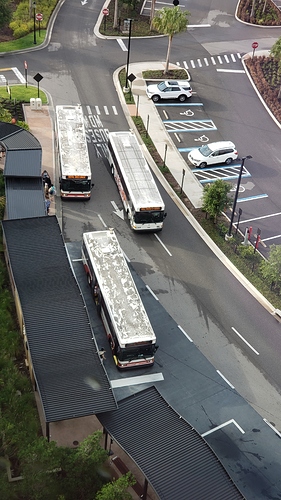 Oh no… sorry to hear about all the issues with transportation. Sounds frustrating. Have you tried ride share and if so, is it getting better (re: shortage of drivers, high prices, availability)? I usually/always rent a car, but with the current state of rope drops, I’m planning to rely on the buses…

Disney have contracted with another company for a few months. Something like 300 buses and drivers.

I suspect social distancing on buses will be the last to disappear, because of the longer transport times, but I don’t imagine it’ll last beyond the summer at the rate things are moving.

I would definitely speak to someone at the Poly about it, if you haven’t already, to let them know of the problems you had.

Just saw a pic on a FB group with a packed bus and people standing. So, looks like that’s out the window starting today. (Edited to add - I don’t know how I quoted “numbers.”

a packed bus and people standing

This is good news. Well, I mean, kind of. Obviously it is nice to ride without being packed in line sardines…but I mean in terms of getting transportation woes resolved, they can transport a whole lot more people if they start filling them back up to capacity as they did pre-COVID. They can probably handle at least twice as many people this way.

Once the bus system is operating more normally, we can expect things to follow as a result, such as the re-opening of the EPCOT monorail, as well as the remaining resorts to open (POR/FQ).

I understand. It shook me though. I wasn’t ready. 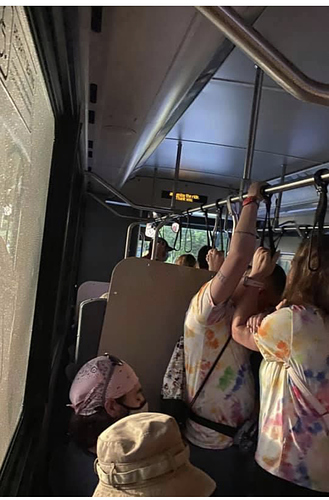 I wonder how long before they remove those dividers!

Yikes!!! This looks like a deodorant commercial. I don’t miss standing on buses!

There are SO MANY holes in the Disney bubble at the moment.

Agree, strongly. We are here today and pretty miserable to be frank. It’s very very busy and so many things are still closed for seemingly no reason. I get it, it’s Disney, but I waited in line for 30 minutes for a pretzel (in The Seas area, so very few choices without going into WS or all the way over to TT.) I tried really hard to stay positive yesterday and I know people will say adjust your expectations/you’re at Disney! But I don’t think it’s unreasonable to have high expectations and standards for Disney. I’m afraid this romance is over.

for seemingly no reason.

Staffing is the most likely cause. They can’t open up everything until they have enough staff to work those locations.

We are facing a similar problem around here with fast food (and other) locations. EVERYWHERE is hiring, and evening offering sign-on bonuses, but they can’t get people to work. As a result, most of the fast food places are drive-thru only with long lines.

I don’t think you’re being unreasonable, but I will say that I think most of us have had that one trip where everything seemed destined to be unpleasant. It sucks, but don’t write off your romance with the mouse yet.
We had that kind of experience in 2019. Some serious failures at our first hotel, a couple of negative CM experiences… But we did get it love of Disney back.

I know “staffing” is the reason, but then they shouldn’t increase capacity so much before they can handle it. There are issues at the resorts as well.

Not unreasonable. It is an expensive trip. Same price, less magic = not good

I was there last week at WL. We saw 5 busses for the Poly come by while we waited 45 minutes for 1 WL bus at MK. I finally asked the Poly bus to check on the WL and surprise our bus came in less than 5 minutes! I feel like sometimes it’s just the luck of the draw.

Well now we’re stuck on Living with the Land because lightning struck the building.

I know “staffing” is the reason, but then they shouldn’t increase capacity so much before they can handle it. There are issues at the resorts as well.

This, exactly. They were premature to open up capacity without having the CM’s in place and enough restaurants open to service all the guests. I spent a lot of time hungry on our trip in May because nobody wanted to stand in line for 30 minutes for a pretzel, and even mobile orders had significant wait times and pick up lines. And nobody should ever be hungry at Disney!

It’s possible to still have a good trip, but one’s expectations need to be much lower than they should be for a $$$ vacation. OP I’m sorry you’re having such a rough time.

Being stuck on Living With the Land would be A-ok with me tbh.

I got stuck on It’s A Small World for 20 minutes one time.

Oh boy, I hope your trip picks up!