Bob Chapek on CNBC - WDW to remain at 25% capacity

Some of Chapek’s remarks earlier this year would suggest that he is fine alienating all of the other guests if he could fill the parks with resort guests, but it seems like there isn’t even enough interest to fill the resorts that are open.

Disney don’t seem interested in filling all the resort rooms right now either. They are definitely being ultra-cautious. And I think pretty much they are targeting Spring 2021 for a “full” return.

Don’t expect anything much new to re-open before then seems to be the message. I read that, for example, it takes around 170 CMs to run Fantasmic, of which around 80 are either performers or technicians back-stage. There aren’t enough of those technicians left now after the cuts to put the show on. So clearly they don’t envisage it re-starting for another 6 months or so. Night-time shows aren’t going to happen over the Winter, neither are many of the stage shows or parades. The vast majority of the technical crew behind them are gone.

Hopefully in 6 months time things will look different with the return of at least things like parades, shows and fireworks.

They would have to figure out how to free up those FP queues though.

Most, if not all, of the FP queues are open right now. They are available for DAS guests and the few times they have to issue a FP. But, having said that, I’m not willing to have most of my lines growing even longer as a resort guest just so that I could have 3 shorter lines. As in…I’m still anti-FP!

Then once they are tapped out of the park, be able to reserve another park pass at another park (if available) to allow for hopping.

This one becomes tricky. If I’m a guest who doesn’t plan to park hop, for example, but I plan to go to Chef Mickey’s for lunch, say, I’d tap out…and then someone else taps in to park hop. When I return, my availability has been given away.

Instead, it might be better to count a person out of one park once they tap into a second. But this would require Disney to have a “reserve” on the capacity at each park meant specifically for hoppers. This could effectively reduce the total number of guests they allow into any park just to allow hopping, which potentially drives down their revenues. That is to say, the additional revenues they would get from those people entering the parks who can’t now wouldn’t be offset by the increase in revenue from park hopping.

I still think park hopping could be done, but it is tricky to pull it off with the park reservation system in place that doesn’t ultimately cheat guests who are paying for the ability to hop.

At this point, I think the number one thing they need to do is figure out how to increase ride/show capacity. Does SDD, for example, really require the spacing on the ride trains since it is entirely outdoors and guests are masked up? It is a case of perception of safety versus actual increased safety. Same would be true of SDMT and BTMRR. Disney is already adding plexiglass to ROTR in order to (hopefully soon) start boarding more people per ride vehicle. These kind of things won’t increase capacity a TON, but every little bit adds up right now.

I agree, ride capacity is a big problem right now and is not necessary. Distancing in lines and masks are what is needed, not all the extra spacing on rides.

What makes you think you need to distance in lines but not on a ride?

In line you could be next to someone for longer than 15 minutes, so distancing and masks are needed. On a ride, you would only be next to/in front or behind another group for a few minutes. It just seems like overkill. If both parties have on masks, is 3 minutes ride time (especially on a roller coaster where the next group would be 3 feet behind you (versus the 6 feet now) enough time to cause an exposure? Seems like a no to me.

Lines have people standing for long(er) periods of time in close contact, including areas where air can be overly stagnant.

Rides you are moving, generally in larger open spaces (or outside). And with masks on, the aerosolizing concern is minimized. (Frankly, this is also minimized in lines as well…but other than the reason I stated above, socially-distancing lines doesn’t do anything to increase wait times.)

I have to wonder if Disney is already thinking in this direction. They have upped the warnings on mask-wearing to the point of threatening to ask you to leave the parks if you are found in violation. If they can “scare” everyone enough to make them keep their masks on correctly, then they can start thinking about allowing reduced distancing on the rides themselves. Compliance is already pretty good, if they can just deal with those “below the nose” wearers!

Anyhow, ride capacity on the attractions with larger ride vehicles such as SDD are only able to run at, on average, 50% capacity at best. Smaller ride vehicles, they are closer to 100% (such as Omnimovers).

They would have to limit pre reserved FPs to 1 or 2 and have the bucket amount reduced and still offer same day FPs for everyone.

Never been to DL but I did plan a trip Feb 2020 that I canceled so familiar with the concept. This would be a great option as well.

Maxpass is available to everyone though, you have to pay for it for each day and offers no advantage to onsite guests with no advance booking.

I wish they would do more original content on Disney+ that focuses on the parks. There are so many vloggers doing it regularly, but it would be nice to see some higher quality content from Disney. Also, throw in some behind the scenes content.

Hope you are right. I have a trip booked start of May 2021, but I’m not overly optimistic that I’ll be able to travel. It seems like travel restrictions will still be in place in the Spring of 2021.

Have you been watching the AK series?

Yes. I’m really enjoying it. I like shows about animals, but the behind the scenes access is really what makes it interesting.

Reading reports like this, makes me think that 25% capacity will remain in place until the social distancing limitations are removed by WDW. 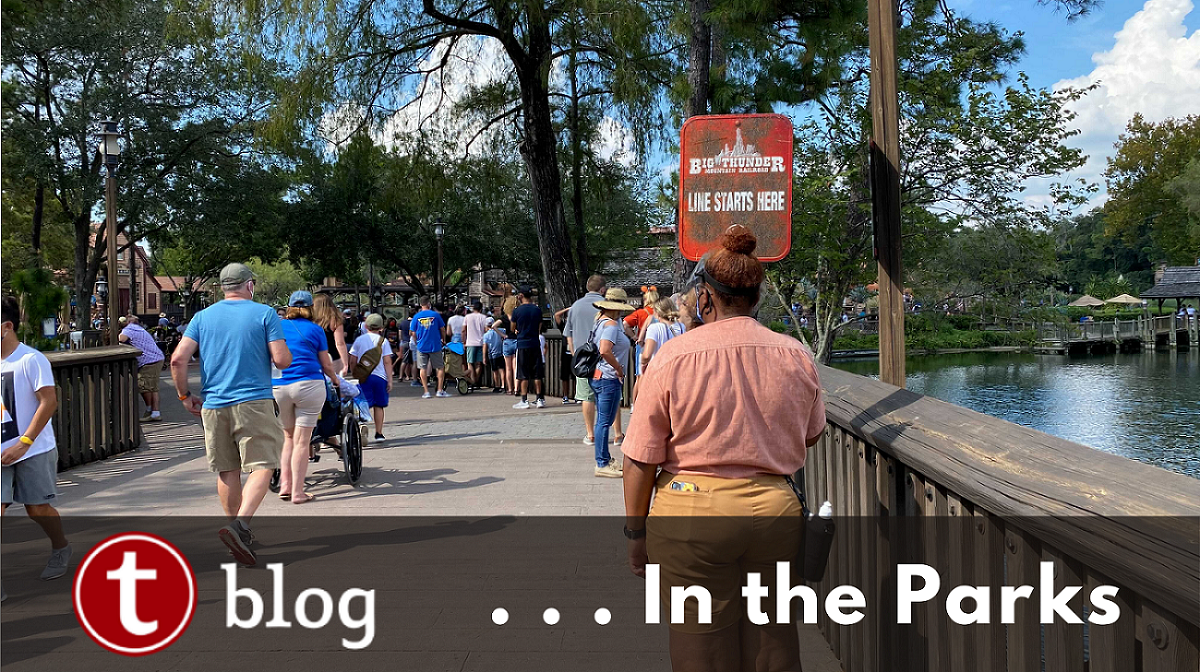 Extended Queues Are Taking Over Some of the Walkways at Walt Disney World -...

Take a look at some of the extended queues at Walt Disney World that extended into walkways thanks to physical distancing.

To me, capacity = maximum.
So that would be 25% of New Year’s Eve levels.
Why could capacity mean anything but maximum?

Something has definitely shifted. Everyone visiting now is reporting longer lines at most times than before.

My only guess is that with the restrictions on rides and shows (most shows being closed) that there are much fewer places for people to go. If it was 25% capacity with the park working at full operations, then it would feel a lot different.

If this is what’s happening it’s kind of ridiculous. It’s exactly what NYC did with the subways, or London with pub hours. Reduce capacity but not crowding. In the end, everyone is forced together so what difference does it make? The only reason to carry on this way is that if there is an outbreak, fewer people would be involved. I can’t really think of another reason why this makes any sense vis-a-vis the virus, anyway.