I realize this post might only interest 2% of the people reading these boards, but as I devoted many hours into the research that went into this project, I wanted to share so that those 2% are able to benefit.

So I’m a craft beer geek, but I don’t actually like to get super-drunk, and I abhor hangovers. So when I go to beer festivals that have dozens of options from which to choose, I quickly learned from experience that I had to identify the beers in which I was most interested so that I didn’t get hammered trying random stuff that wound up being sub par. So my spreadsheet research began - compiling lists of all the beers available along with some ratings. And to be honest, making lists just appeals to my OCD side (it’s why I’m here in the first place

So I went ahead and applied my beer spreadsheet strategy to Disney. I made a spreadsheet tabbed by park (along with a tab for resort locations in which I’ll be staying or dining - it was too much to go beyond that) that lists each TS/QS/kiosk that sells beer in the parks, the brewery, the beer name, the style, the ABV, and the Untappd rating (my rating tool of choice - think of it like a Yelp rating for beer). I then sorted the data to identify the 10 highest rated beers available at each park. To assemble the data, I primarily used the WDW website menus, thinking they’d be the most updated. However, these menus didn’t always list alcohol options, so I used other resources like http://www.hoperatives.com/beer-travel/disney-travel/the-hoperatives-guide-to-beer-at-walt-disney-world/ and http://www.partythroughtheparks.com/ too.

I then print-sized the spreadsheets to print on one sheet front and back (except Epcot, which has to be 2 sheets due to the length). For my trip, I’ll print them out and laminate them to have in my go-bag with the TPs.

So I’ll just snip the top 10 lists and post them in this thread below. I’m not sure the rules on sharing files through this website - is it ok for me to say that if you’re interested in the whole list, PM me your email and I’ll send it your way?

Here’s the top 10 beers for the Studios. The numerical rating is the Untappd rating on a scale of 1-5.

So you get a feel for the larger file, here’s a snip of the entire Magic Kingdom list, rather than a top 10, as there are only 10 total beer options in the park total. 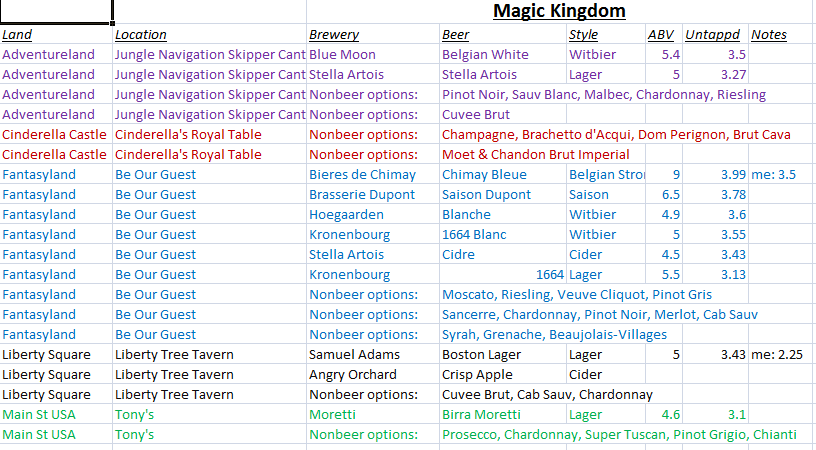 Wow!!! Nice job. I wish I had this to reference in February when I was there. I think I had a Sam Adams Hopscape from a cart in Epcot and a golden monkey at AK. Sometimes if it is worth doing…it is worth over doing.

Wow! I am very impressed! Thank you for posting this- it will help many people!

Good job, thanks for all the work you put in

Thanks for sharing! My DH also loves craft beer. I can’t wait to show this to him, although I’m not sure when he’ll get back to WDW.

Thanks for the work on this…as a 2%'er I enjoy looking at the ratings and like you try not to get hammered at the festivals. I see a few breweries that are sold here in Philly but not Cigar City…is that local to Florida?

Yes, I had seen beers and ears, but their last WDW blog post is dated 9-2015, so I wasn’t sure how accurate their lists were. Plus, for my list I really wanted to add the ratings and rankings to make it more than just an index. Hopefully both resources can be useful!

No problem, jbrew, it was fun! I just moved away from Delaware, so I often came to Philly for beer events - Cigar City is the “Victory” of FL - the most prestigious of the first wave FL craft breweries, and one that’s now available in 6 or 7 states, including PA. If you want to track it down and try it, here’s where to find it:

Thanks for this! I just spent way too much time at work cross-referencing this list to my Untapped to see what I have already had and to start my hunting list for next months trip.

Shoot me your email in a PM if you want the whole list! Glad I could help redirect your work time to more productive endeavors.

Excellent thread! Here’s a few I would from my last trip. I am an Untappd user as well, no particular order but I thought a few of these are worth mentioning and may already be included on your sheet:

This is very cool and useful. I love trying new beers while I am at Disney. If I can figure out hiw to PM you I would love the whole list.