Another park day and another in-park breakfast ADR. This time I decided we didn’t need to do a pre-park open one, so our ADR was for 9:15am. Unfortunately, as it was almost the end of our week and without the pre-park open pressure, we moved a little slower than we should have. We took the bus to AK and didn’t arrive at the park until 9:15am, where we were met by a long line at security.

My learning here: Either do pre-park open breakfast or wait until 10am or 11am. I know that 9am cuts into touring time, but this didn’t impact us much because we had spent the afternoon before in AK. But, the lines did slow us down quite a bit and I would have rather avoided them.

We hurried into the park, made a quick stop at the baby care center to buy a new pacifier for DD since we’d forgotten or lost ALL of hers. Oh well. I was grateful for the baby care center – and it was on the way. Finally, we arrived at Tusker House about 15 minutes late for our ADR. This wasn’t a problem and we were seated within 5 minutes. It was threatening to rain and we left DD’s stroller in the parking area under cover, but without the stroller cover on. To our dismay, it made been moved to an uncovered area, so we were emerged an hour later, the stroller was soaking wet and stayed that way for the next day despite our efforts. Boo.

Breakfast was really good. It was nice to have more variety beyond typical breakfast fare and some added flavor to the food. We really enjoyed several dishes, including the curry, and vowed to have lunch or dinner at Tusker House on our next trip. The character interactions here were good and my son was happy to meet Donald Duck, one of his favorites. The little parade with the characters and kids was fun too. We were running late though, so I contemplated skipping out on the last character visit by Mickey, but my husband convinced me to wait it out.

Finally, we headed over to Kilimanjaro Safari with our wet stroller and walked on even though we had FPs booked. The safari was just ok in my opinion. I’d say it’s a glorified visit to the zoo, with a little sense of adventure thrown in. While Disney has tried to replicate a real safari setting, it was definitely a tour to see the animals versus trying to spot them on a real safari.

A rhino on the safari 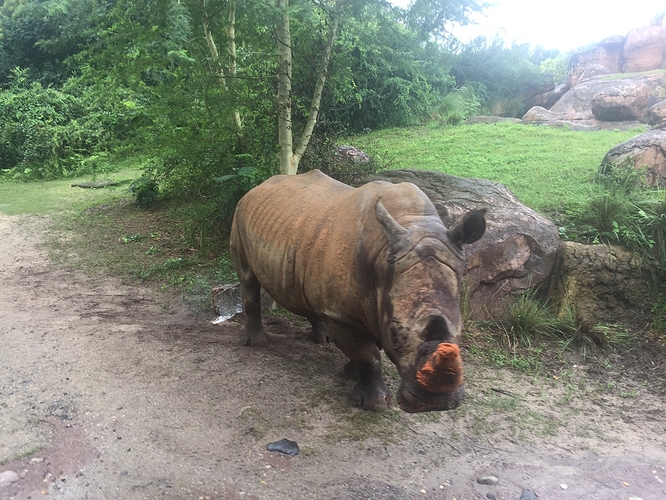 We had hoped to see the first showing of FotLK right after the safari, but just missed it since we started off late. Instead, we walked over towards Asia to explore a little and ended up stopping at the Meet and Greet with Baloo and King Louie. DS had a Jungle Book obsession when he was younger, so this was a lot of fun. On our way back to Africa, we passed Flik and stopped for photos. He joked around with DS and was a lot of fun.

We headed back to FotLK and used FPs to enter (since I had modified our unused ones from KS). While FPs is not necessary at all given the size of the theater, it was nice because we were seater earlier and avoided complaints from DS. The show was awesome. The music from LK is one of my favorites. We were in the warthog section and DS had a lot of fun making the noises. This show was another thing I didn’t “get” before our trip, but I loved it and would definitely see it again on future visits. And we’ll also plan to see Finding Nemo the Musical next time.

Fun at Festival of the Lion King! 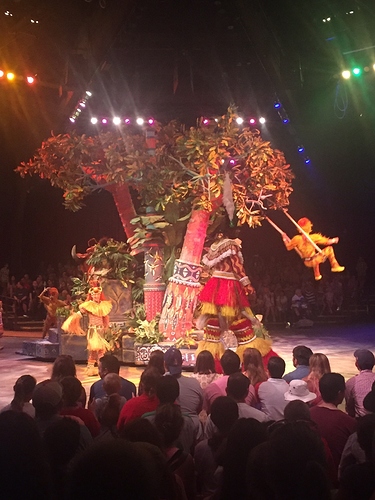 Then, it was back to Pandora for another FP ride on FOP. Once again, it was great and DS was thrilled that he got to ride TWO more times. 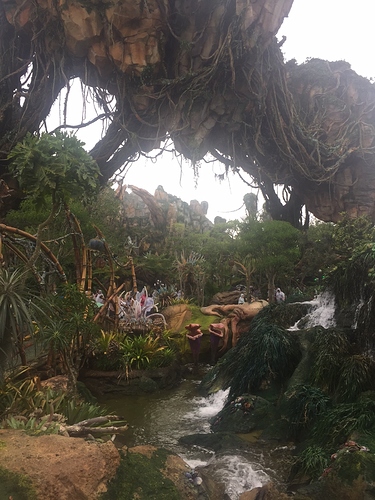 It was wet and gross out, so we contemplated just heading out for the day. It was too wet to do KRR and although we had FPs booked for EE, my son was fine skipping it. I had also planned to skip Dinosaurland. The Boneyard play area was on our TP, but given how wet it was, it just didn’t make sense. Before going, we stopped for Flame Tree BBQ and had a wonderful lunch. Two platters for more than enough for us and we really enjoyed the food.

This brings me to a question: What’s up with the ducks and birds in QS areas?? We were surrounded by birds at Flame Tree and also at Cantina de San Angel in Epcot the day before. I know people feed them and that makes it worse, but it can’t be sanitary to have so many birds mixing with people while they are eating. DS was incredibly spooked by them and could barely eat his food in both places.

Again, we had a short break back at the hotel, but it wasn’t long enough for naps. On the bus back to our hotel, I went to book our 4th FPs at MK and noticed that PotC was down, so I decided to book it and hope for an anytime FP. It worked! On the way over to the MK, we decided to use the FP for the Tinkerball M&G right as we entered the park.

Then, we headed back to Fantasyland and did some of the smaller attractions that we had skipped on our first day there. We rode IASW (lots of nostalgia!) and Mickey’s PhilharMagic (totally fun)! We wanted to do a ride on the carousel, but HEA was just about to start and it was closed (I guess because they set off fireworks from right there, but the CM told us that the horses get scared of the fireworks. Ha ha). Instead, we went to 7DMT and used RS passes for two rides. DH and DS were on during the fireworks and had a blast. 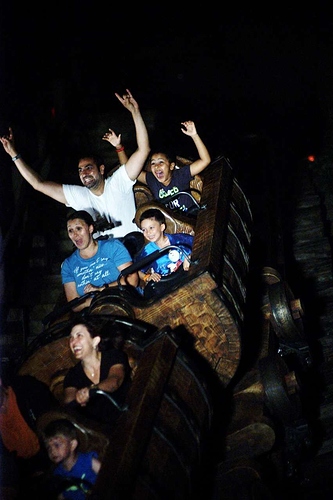 While the show was still going, I tried to hurry them over to Frontierland, but they wanted to stop and watch and were quite impressed. Finally, we moved on as the show was ending and went to Splash Mountain. It was the final day, so others were rushing over too. We had 2 RS passes, but it was walk on, so they went and loved it. It was DH’s favorite ride of the trip.

We wandered into Adventureland next and DS and I rode PotC just before closing at 10pm. We had time for a final ride and we’re going to be the last people to ride for the day, but when my son saw that we would be on the boat alone, he got totally scared and refused to ride. The CMs were super understanding and one of them accompanied us out the backdoor and around to the front.

We had so much fun on the evening rides, that we completely forgot about dinner. As we headed back to Main Street, we had a few PP photos taken and popped into Casey’s Corner for a hot dog (with mac and cheese – wow) and fries. We sat outside eating the food and where we caught the Kiss Goodnight show at least three times.

This night was a blast. It was great to be free of a schedule, but we had several RS passes which gave us a lot of flexibility. On top, the rides were less crowded because most people were watching HEA. We had one day full day in MK as our final day, but I was honestly a little disappointed that this wasn’t the end because it would have been a perfect ending.

And that’s a wrap! 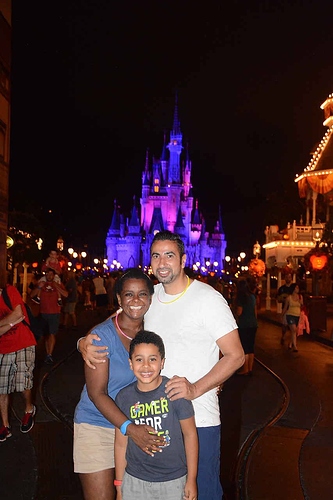 I love your pictures!

@Hoyasaxa00, I’ve never considered Tusker House before. With your positive review, I’ll need to give it a try next time!

The original version of KS was much more of an adventure. They’ve taken some of the fun out - and I agree it’s become much more of a zoo visit. I still like it… but mainly because my kids get so excited about driving in the vehicle.

We like TotLK much better than Finding Nemo. You still need to see Nemo once…but in my opinion TotLK is much more entertaining.

Our last few times at WDW we’ve only stayed 4 days. Our next trip I’m hoping will be in 2018 with at least 7 days so that we can visit Pandora a few times as you guys have done.

It’s incredible that your kids lasted to the kiss goodnight. I’m quite sure we’ve never made it that far in the many, many times to the Magic Kingdom. Good for you guys!

Really enjoyed all of your posts! Great details and photos! Thanks!!

Enjoyed your trip report. It’s always nice seeing how people look at their trip and experiences.

Thanks for the comments. Will make sure we hit Finding Nemo next time. I must admit that I really liked accepting that there will be future trips so I didn’t feel compelled to do everything!

A ha. Makes sense. I guess I can see why they’d be excessively cautious when it comes to birds now, but it’s a shame how much it interferes with the dining experience.

And yes, my son lasted until the Kiss Goodnight, but the little one was long asleep in the stroller. My son has a tendency to keep going though until his body physically stops moving. So, he was fine in the park when we were moving around, but then crashed on the bus back to the hotel both nights we were in MK late!