Like many others, I found the information on this forum to be invaluable in my planning, so I wanted to be sure to share my experiences, in case it’s useful for others. I’ve only written days 1 and 2 if the trip report so far and it’s already quite long. I’ll try to throw a few photos in to keep it from getting too boring. Enjoy!

Background: I traveled with DH, DS6 and DD1 (she turned 1, two days after the trip ended). It was our first family trip to WDW. I went several times as a kid and then once right after college, but that was 15 or so years ago and so much has changed since then. DH is not from the US and really had no idea what a Disney World trip would entail, so that left all of the planning to me. He ended up being pretty amazed at the scale of all of it.

Planning: I’m a planner by nature. We travel quite a bit as a family and every vacation, even for a long weekend, involves a fairly-detailed spreadsheet with must-see sites, restaurants ideas and a high-level budget. I figured I was well-poised to take on the Disney vacation planning challenge – and boy did I have fun! While I would complain about making ADRs 6 months in advance, I think I secretly loved an excuse o get into detailed planning so soon. My planning was rather intensive with a detailed, daily itinerary with 15-min increments, tabs to track ADRs and FPs, both what I wanted and what I was able to get, a budget of additional expenses, a list of snack ideas for each park and more. My family and co-worked may laugh at my spreadsheets, but I thought they were very helpful! While we did stray from the plans quite a bit on some days, I felt that I had done enough research (thank you forum and Liners!) to know what the options were and which made the most sense when things needed to change for whatever reason.

Hotel: We stayed at YC. I booked about 7 months in advance, but I spent the next 4 months going back and forth between YC and BC. I probably change the reservation four times. In the end, I landed on 7 nights at YC with Free Dining. This turned out to be more than $300 cheaper than the non-Free Dining option at BC for the same dates. In the end, I was very happy with the YC choice. Really, the hotels are the same, as they are connected and share all of the facilities (Stormalong Bay and restaurants). And YC has a QS option now. We never got food there, but it was really handy for morning coffee and afternoon/evening drinks. I had heard that the lack of QS was an issue in the past, but it’s a non-issue now. 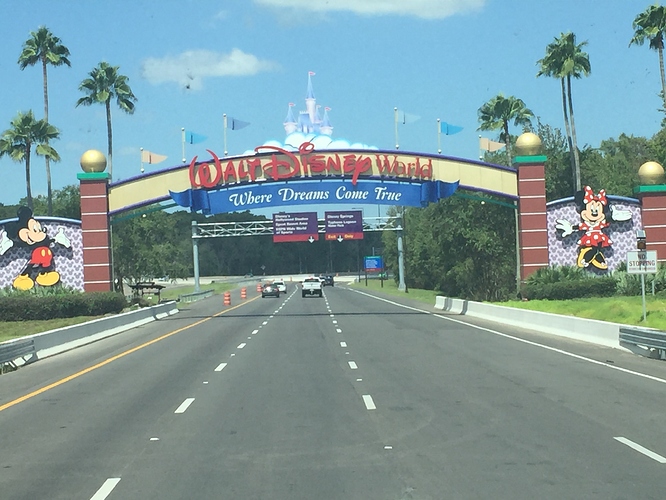 Our flight arrived on time with no issues, so made our way to the DME desk and got to scan our magic bands for the first time. We were in a pretty long line for the bus and ended up on the second one that left. Our bus made stops at Caribbean Beach, Boardwalk, and Beach Club, before finally making its way to Yacht Club. My son was definitely antsy at this point and ready to start his vacation.

Unfortunately, our room was not ready when we checked in, so we left our carryon bags at Bell Services. I’d also ordered groceries from Instacart/Publix, so I met the shopper who had to check my id for our alcohol and then Bell Services took everything to store as well. Instacart was great and easy to use. When the shopper started shopping, she messaged me through the app and ask me to follow along so I could review and approve any replacement items. One tip – you can remove the default service charge that the app adds and instead add a tip that goes straight to the driver/shopper.

After leaving everything with Bell Services, we’d headed to the pool. DS6 jumped in and thoroughly enjoyed the sand bottom. At 2pm we had an ADR at Beaches & Cream for lunch. We had burgers and chicken sandwiches. There were nothing out of the ordinary, but it was a solid meal to start our trip and power us up for our first venture into Epcot. 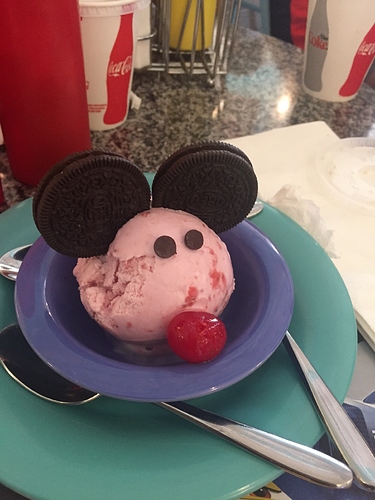 We left the hotel a little after 3pm and walked over to Epcot. Since we left from B&C, the walk was really only 5 minutes (wow!), but other times leaving from our room, it was 10-15 minutes – still super convenient. Bag check and magic band scan done, and we were off!

My TP had us spending time in France, UK and Canada before heading over to FW for our first fast passes. France was great – we enjoyed pastries, orange slushies and ice cream and loved the ambiance. We had photos taken by a lively and eccentric photographer too. On to the UK, but we basically just walked through one of the shops for some cool air. And we walked right by Canada since nothing enticed us there.

While I love the World Showcase concept, it didn’t resonate with my family as much as I thought it would. I’m American, but we’ve lived in Spain for the past 3 years and in Asia before that. So, we travel a lot and have been to many of the countries featured in WS in recent years. We weren’t really wasn’t an interest in getting pizza from Via Napoli or sausage from Germany (but pastries in France and caramel popcorn in Germany were must dos)!

Now, on to Future World for our first Fast Pass – the new Mission Space. I first did the green with DS. He loved it and was ready for the orange with DH. DS loved it, but DH thought it was pretty intense (but again, he’s never really been to an amusement park). Next, we went to Spaceship Earth. We were in the standby line since I had switch our FPs to Mission Space when it reopened a few weeks before. DS was not happy with the line, but it was only about 15 minutes in the end. The ride was as fun and corny as I recalled from my childhood.

Our next FP was for the Character Spot. After about a 10-minute wait, we had our first character meet & greet of the trip – Mickey, Goofy and Minnie! DS really enjoyed it and liked getting everyone autographs in his book. DD was curious, but not scared and really warmed up to the characters over the course of the trip. We also waited about 15 minutes to meet Baymax. My son loved him. Since we were already running behind schedule, we didn’t have time for Joy and Sadness (but we did see them on our next Epcot day).

We had a 7:10pm ADR for Coral Reef, and again, because we were already late, we had to skip Under the Sea and Turtle Talk for now. We had a short wait for Coral Reef and ended up with a table right next to the tank. My son loved the view and pointing out the different fish and the drivers. I thought the food was pretty good. I had the lobster mac and cheese and my husband had a fish that I can’t recall. I had read several bad reviews, but we didn’t have anything bad to say about it – and our plates were clean! That said, I found the dining room to be very hectic, so the ambiance wasn’t that great.

View of the tank from our table 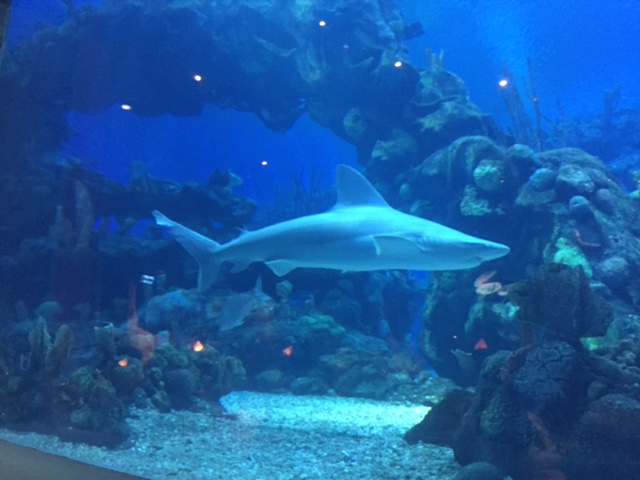 After dinner, we headed over to WS. The plan was to use our Frozen FP and skip Illuminations, since we could watch it later in the week. We were right at the end of our FP window and I was worried we would miss it. All was fine because Frozen was down and our FP was converted to an anytime FP that was good through the end of the following day. It all worked out well because my son was fascinated by the fireworks and we had a decent vantage point right by the Frozen entrance. Within 5 minutes of the show finishing, they opened the standby line, but everyone with FPs was left confused. I guess they wanted to get the crowd into the standby queue because a few minutes later, the FP line opened and we basically walked right on.

I must admit that I loved this ride way more than I had expected. Everyone was singing along to the music and the drop with FUN! DD1 must not have loved the drop though, based on the expression on her face. It’s priceless! 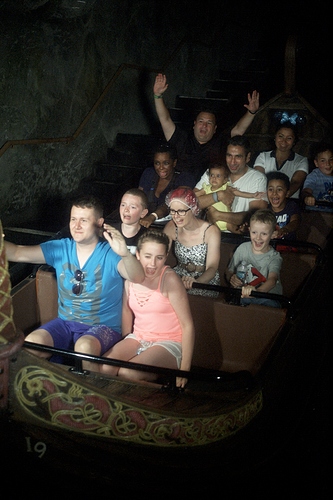 Epcot had evening EMH, but we decided to leave the park since we were up early that morning for our flight and had a full day ahead including an pre-park open ADR at Hollywood Studios. All in all, it was a great start to our trip. Although I was disappointed that our room wasn’t ready when we arrived, I think it worked out perfectly because we jumped right. Knowing my family, if we’d gone into the room, there would have been a lot of laying down and ipad watching, and I would have had trouble getting everyone motivated and out the door. Instead, we hit the ground running.

While we were out, I finally received our room ready text – without a room number though! We stopped at the front desk and they did more check-in formalities and then I asked Bell Services to deliver the items we had checked earlier in the day. Our luggage was already in the room. I had asked, and now all of the YC rooms have been renovated. The room was bright and fresh and I liked the modern décor.

Then it was off to bed with a 7am wake up for everyone!

Yeah, I debated YC vs. BC incessantly and now laugh at myself because they really are the same. It’s like two wings of one very large hotel.

We didn’t eat at Epcot as much as I had planned because there were a lot of other things to do in the evenings, given it was our first trip. But if we stay in that area again, I’m sure we’ll make better use of the Epcot dining options.

You definitely fit right in here with us uber-planning, spreadsheet people!

To me, planning is just as much fun as the trip.