Are you fricken kidding me?

I just found out that there were no Christmas lights on Cinderella Castle this year. And that there may be none ever again?

Why has no-one mentioned this? This is the last straw. We’re in deal-breaker territory at this point.

Yeah this year it’s projections only and they are limited as well.

Come to the dark side … I mean California. 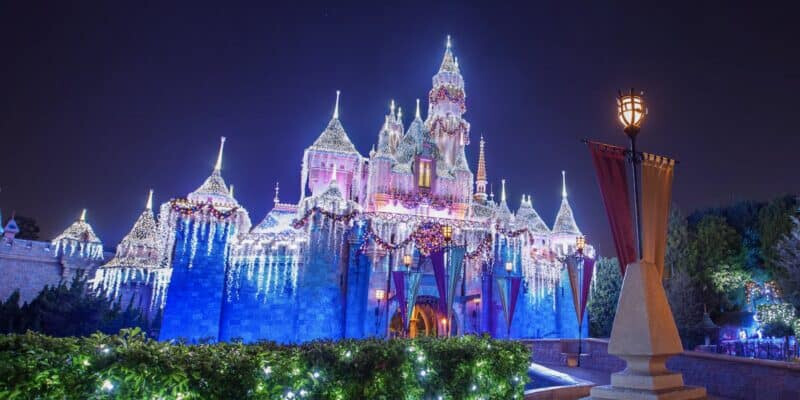 That castle is wee but stunning!

Nope. No lights. Just this. 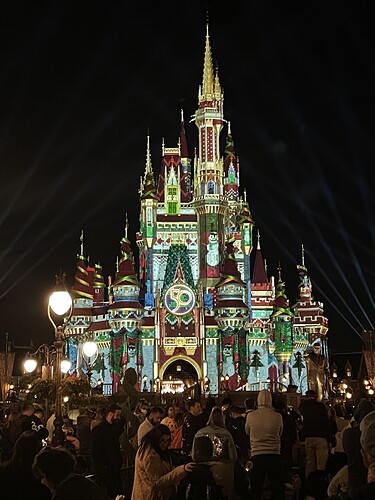 Sure, that’s stunning. But you can see that literally any day of the year. (Projections, I mean. Not those specific ones, obviously.)

That pic is from a blog. This is mine from November. 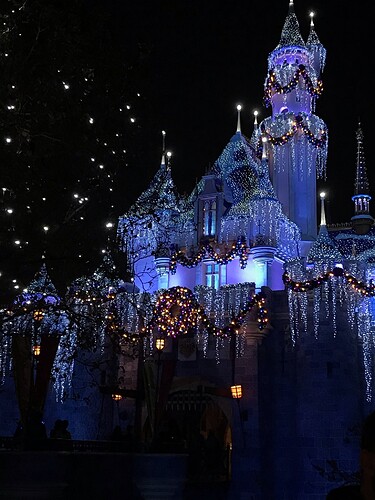 I have some doozies from November myself

I agree. I was disappointed, as Christmas at Disney was a bucket list item that I got to do thanks to a cancelled 2020 trip. But that’s what I got a few weeks ago.

It seems DL does much better with holiday decorations. WDW has been one BIG disappointed after another

I have not done Magic Kingdom at Christmas, but in all ways I pretty much consider DL superior to MK. My own personal bias.

But DL at Christmas … is so amazing. For one thing, we got a full parade this year - a big one! And it wasn’t saved for the party - day guests got to see it! And IASW at Christmas is beautiful.

(AND you can’t see the pink

It was pretty, but not really what I would expect from WDW at Christmas.

The pink isn’t as bad in person. But I do prefer the more blue/gray.

Nope can’t do IASW. I did it once at each park (DL and WDW) and vowed never again. It drives me bonkers.

I don’t believe they can do the lights on Cinderella castle due to the 50th anniversary modifications. Once those are removed, they may be able to bring the lights back. The pieces that are used to add lights to the castle are pre-fabricated to fit the castle exactly, so the things they added make those not fit.

Not the inside! The outside! 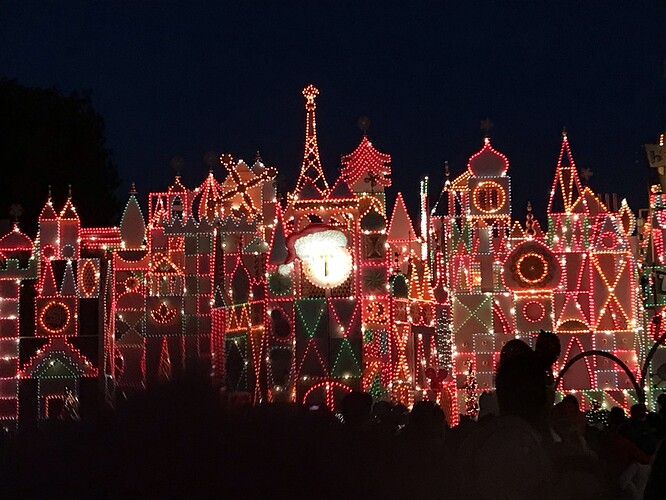 Not the best picture but you get the idea. Plus a “lighting” of IASW that is fab and includes some animated projections.

The Christmas version of iasw at Disneyland is better. They sing I think it is Jingle Bells and Joy to the World maybe in medley fashion. It’s much better than the other song.

I guess that means no lights next year? Horrors!

My first trip to DL was when I was 6 and my family rode small world near the end of the night and one of my most vivid memories of that trip is waking up at the final room of small world and being very much creeped out by all of it, the song, the dolls, the movement. I was 20 the next time I rode it and only because I was at DL with a friend who very much loved it and very much coerced me to go. I was still not amused. Of course my oldest turned out to love it after his very first trip in 2013 (he called it the ‘boat castle’) and so I learned to appreciate it (but the song still drives me crazy).

And then in 2014 the first year we had APs we went for each season and of course had to do small world Christmas and even though I still only tolerated the regular version of the ride, I absolutely fell in love with the Christmas version. They mix in Christmas songs so it’s not just the same one song the whole time, so I think that makes a world of difference, at least that’s what I think it is for me. And there’s just something about the season that fits so well with the theme of the ride. It’s definitely worth trying at least once. If you ever make it out to DL.