AK Tours: Caring for Giants vs. Up Close with Rhinos

I skimmed through related topics, but didn’t see where anyone had actually gone on the rhino tour yet. There are lots of good reviews for CfG so I feel like I couldn’t go wrong with either option. Has anyone done the rhino tour yet? Should I be the guinea pig and report back?

Bumping this up because I was going to ask the same thing!

Hmmm.someone had just done this. I will.see.if i can remember

Yes @lizzieanne771 did it. Took a while fo find this. She said a little in her trip report. But maybe tagging her might bring her to say more

I have actually done both. The BEST thing is that all the money goes to conservation of that animal!!

Giants - You do not get to interact with the elephants, but you get a closer view (assuming they are out and roaming) than on the Safari. There is a rep from an African nation to talk about efforts to increase their population and decrease conflicts with farmers. You can take pictures on the viewing platform.

Rhinos - You start off learning about how the rhinos are cared for at AK, efforts to help protect them in the wild, and a bit about the AK family tree and breeding efforts between associated Zion and animal facilities (there is currently a male rhino - I keep saying Dustin, which may not be right but it is not an African name and it starts with D - who has been brought to AK because one of the breeder experts thinks genetically he would be a good match with Jao - whether they hit it off is still TBD). Then assuming the rhino (usually Kiama as she LOVES pets) wants to participate, you get to pet her through a barricade. We were warned that she had been “feisty” that morning, but by the time we got around she was in place and ready to go. There are barricades between you, but you reach through and pet her. Kendi (Kiama’s mom - and the mom Of almost all if not all of the rhinos born at AK) ambled over and we saw some of her behaviors used when she has to take meds or vitamins or get a check-up. Kendi is not as into pets - but that is her maternal instinct of being on guard. The only thing I wish they would do with this is have a photographer to take pics of you petting the rhino!

I would do either again.

I planned “Giants” in the afternoon to break up the day. Everyone really enjoyed it and it got us out of the crowds for awhile. We also got some sneak peaks at Pandora as we walked back stage. Got free sheets of elephant poop paper & the boys really got a kick out of that. Great views of elephants & stories about their personalities.

Went immediately to Kilimanjaro Safari afterwards. Kids were a bit surely on the truck ride. I think it was 50% tired. 50% not as intimate as “Giants”. If I had a do over, I would have done the Safari first.

That’s helpful! Thanks! I might try to squeeze one of these in if there’s availability. I like elephants more than rhinos, as a rule, but the possibility of getting to pet a rhino is intriguing.

Yes, there is a Hidden Mickey in the floating mountains that you can only see on the backstage walk to the vans! Of course, being backstage you cannot take a picture of it. But it is cool to see!

Basically, this is pretty close to my reaction to petting Kiama if there was a photographer (and I was as attractive as Laura Dern…and we were petting the horn/face - you pet the back)… 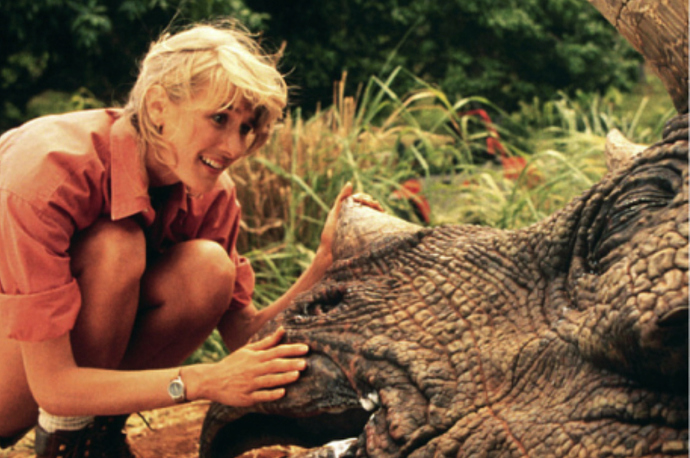 I found out that Kayla, the female white Rhino at my local zoo came from AK. She has had 2 babies in the last few years. Apparently she and the male are quite smitten with one another and the zoo states that it has no problem with them voluntarily mating (which is said to be rare in female white rhinos, as they usually don’t like to mate repeatedly with the same male).

Yep! Kayla is at one and another AK-born rhino is at another. Spread the bloodlines out.

Where do you live?

I’m doing CfG in November as part of our traveling homeschoolers package.

@lizzieanne771 are you not allowed any photos?
I was hoping for more animal experience than this sounds like. I’m a little sad.

No photos are allowed in any backstage areas on any tour. (Other than the viewing platform at CfG.)

I knew going in this was not Dolphins in Depth or anything like Discovery Cove. Nothing in the description promises tons of interaction.

I live in central California. The zoo is the Chaffee Zoo in Fresno CA.

I had to pick an educational offering and I knew it was more our thing than Behind the Seeds.
I’m glad to know now about the photography restrictions. It won’t come as a surprise.

I hope you enjoy it! They were pretty clear when I booked it - and in the email the week before the trip - about the no pictures backstage.