A year of college or 3 nights?

I’m at kiddos orientation for freshman year of college and room, board, tuition, fees will probably cost about $25k for the first year.

I’m also going on the Disney Wish next month (just started checkin last night so less than 30 days!). I wanted the cabana on castaway cay and a 1 bedroom suite as I’m traveling with two teens. However, the only concierge room available by the time Silver was allowed to book was this: 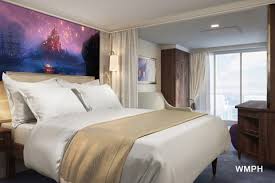 And despite me begging Disney I couldn’t put the girls on this room and a regular room so we could two rooms but still concierge. I mean take my money Disney!

So I was gonna squeeze and make it work but I got on the waitlist for suites. Lo and behold a 1 bedroom opened last month and now we have space and 2 bathrooms and are all concierge. Woot woot!

But apparently they didn’t take me off the waitlist and today I got offered THIS! 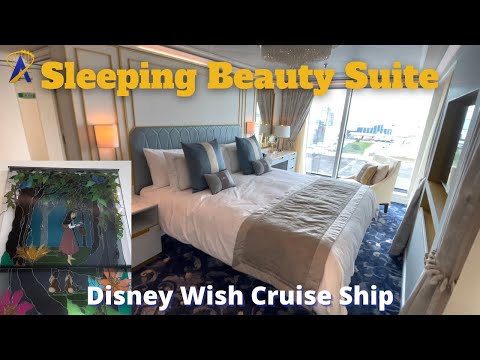 Which costs……you guessed it, an entire year’s worth of college! So do I send my son to school or live it up???

Obviously that’s a joke!
But holy cow that’s a lot of money for three nights! It’s a serious leap in cost from the one bedroom. The email has been sent to the concierge team: 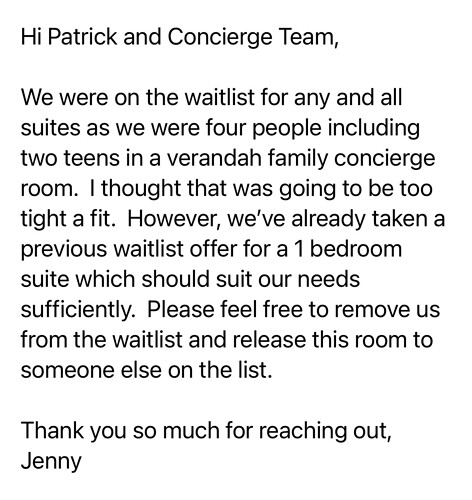 But for 15 minutes I allowed myself to dream. But of course Cindy says, “A dream is a wish your heart makes” and my heart is with kiddo. Lol.

You got lucky if you snagged a cabana since with the Wish there are FAR more concierge staterooms/suites than there are cabanas.

Yeah I’m seeing that on disboards. And at the time I was a standard concierge room. But I got it. I had saved my email and sent it at 12:00am on the dot on my 130 days. We got cabana 20 I think. The very last stinking one. I saw on the activities list now that I can book things that there are missing cabana numbers. Are some being refurbished? Set aside for the Royal suite that I just passed on.

The kid can always take out a loan for school or finish school in 3 years instead of 4 years!

We need to dream to get through life and here and there, dreams do come true! Seriously?? $25k for 3 nights!

That I don’t know. I’d imagine once all the booking started they realized they would have to hold some for the higher tier suites - but I don’t know. My sister doesn’t have anything to do in that side of things.

Ha ha ha. Not very fair of me considering I dropped a semester, didn’t go the next and then took 4.5 years and actually finishing. So really 5 years of my mom paying tuition.

Why are you paying for your child’s college? That’s my question. My kids paid their own way through and graduated debt free.

my parents paid my way. They paid tuition, fees, books and living expenses and I worked to pay for groceries and entertainment and when I started working 24 hours a week at a real job (same job I have now full time but I’m a manager now) my grades suffered. I want my kids to focus on their grades so it opens the door to a better career. Particularly my son who suffers from severe anxiety and adhd. I worry very much about his ability to just do full time. We’re attempting 504 accommodations where 9 hours is full time for him (my brother has the same learning disabilities and he was awarded that accommodation.). My son is smart. I’ve seen his IQ score but school is extremely difficult for him. School is a full time job.

Such a loving, understanding supermom!

Yeah, she’s pretty amazing. She’s still one of my best friends. She also took 6 years but was on a 5 year plan and had me so we can cut her some slack.

I want my kids to focus on their grades

I went from a 3.86 when I just worked at a temp agency on weekends to like 3.3 something after I started working part time daily. I either had 8am classes or 8am workday and got home at 10pm every day (I did swim team too). It was insanely long days with very limited study time and my major was math which you absolutely have to do your homework. Hence my grades.

That’s what I was thinking.

Then again - I can’t afford that kind of vacation no matter what, so it’s not an this/that choice.

I can barely buy groceries and gas anymore.

Sorry you can’t do both OP. I’m dying to get on another cruise. I’d do an inside bunk room right about now.

I paid my own way through college, did NOT graduate debt free, and just paid off my loans about 3ish years ago. (psst I’m 48)

As such, and because we are in the fortunate position to do so, we are paying for our daughter’s college education. I don’t want her to come out of school burdened the way I was.

The cost of education in this country is apalling, and how each family approaches it is unique to their circumstances. And every single one is valid. I’m super enthused you didn’t pay for your kids’ schooling AND they came out debt free. That’s not the most common experience unfortunately. And I think our economy suffers for it.

The cost of education in this country is apalling

Agreed. I was almost debt free coming out of college in 1995, because I worked my tail off year round, but especially in the summers. I went to a state school and lived on campus. There is nothing legal a kid can do now to earn enough in the summer to pay for a year of college!

I think our economy suffers for it.

Yep - the idea of kids graduating and already owing a mortgage worth of debt is like starting life out with a giant snare.

My oldest owes just shy of $20K for his BS, but that is because of room and board and him going away. Kids two and three have both chosen to be commuters and will both be debt free. One is also doing a state school and the other got enough scholarships that her private college will cost her less than $1000 total for four years.

I’m grateful for every opportunity they’ve had. I hear so many horror stories.

My parents always told us that they would cover undergrad but anything else was on us. Granted “on them” also included student loans for us and - at least for me - work-study. My sister called them on it when her loans came due - so they covered hers and what was left of mine. (No, we didn’t get a car when we turned 16, or when we graduated. We bought our own cars. I didn’t have a car until I had graduated from college and had a job.)

We bought our own cars.

Good point.
We had a car given to us for our third family car and we let our kids have it as mostly theirs for their senior year of high school and first year of college (as they commuted to community college). It died after a year, and DH and I replaced it with a very nice one on us.
So we have been able to support them in that way.
They pay the insurance though.

There is nothing legal a kid can do now to earn enough in the summer to pay for a year of college!

This is the sad reality for those choosing to go to 4 year colleges.

Okay some of the mystery solved. 13 does not exist. 16 is handicap accessible so not just available for anyone. But cabana 1 is not listed either and I see reference to it existing. But someone in Disboards said they were in the tower suite and were told they would get no advantage for cabanas by the concierge. So maybe 1 is being refurbished?