A rare moment of moaning from me

Here in the UK — or Plague Island, as we’ve started to call it — it is now officially Christmas Eve.

2020 has not been an unmitigated disaster for me. There have been some highlights — notably my visit to DLP, and Paris itself, in July.

But it has been a bit of a grind. I’ve worked — I know this makes me luckier than many others — pretty much without a break for the whole year. I’m tired. I want to get away. I want to recharge. And escape.

It is so bizarre to me that for the first time in my life — I’m 51 — I am banned from visiting the USA. I’ve been flying over since the 1970s — whenever I wanted, as often as I’ve wanted: and that’s been a lot. I am likely more widely travelled in the US than many of you. I’ve loved every trip I’ve made. It’s a fantastic country to visit.

If I could, I would get on a plane to Florida tomorrow. My job isn’t stopping me. I run my own business: I can do what I want. Money isn’t stopping me — hell, I have refund money from two cancelled trips from June and October sitting in a savings account.

No, this damned virus is stopping me.

I feel like I’m keeping it together, but that — if I let go of my desperate grip — I could lose it. I have a trip to DLP booked for April, but right now, I’m banned from France, too. Sure, there are vaccines now. So by the time April comes around . . . But there are also mutations and they’ve made the virus worse.

I won’t lie — I’ve found it really tough reading these forums during the last few months. You damned people don’t know how damned lucky you are that you can go to WDW whenever you want. I feel like I’m in prison here.

As you may know, I actually booked a trip for January at the weekend. And cancelled it the next day. Sure, I went a bit nuts. Sue me. What that incident taught me is that (a) I’m a little more fragile than I’d realised right now, but (b) I know how to plan a dream trip to WDW in two hours. I did it once. I can do it again.

So, if by some miracle, the US lets me back in in the next few months, I’m getting on that plane. The second it’s announced I’m booking flights and accommodation.

Except one of the particularly nasty things about COVID is that even then there are no guarantees. A week ago the UK prime minister was promising everyone a five day Christmas. A few days later, he’d cancelled it all.

There’s a world of difference between booking a vacation and actually being able to go on it. So many roadblocks can suddenly spring up. New York has said today that travellers from the UK have to quarantine for two weeks on arrival and that marshalls will be sent to their accommodation to check that they are doing so. Will that apply to someone merely wanting to change planes in New York?

It’s Christmas Eve and for the first time in my life I’m still not yet in a Christmassy mood. I even made a full Christmas lunch today. It didn’t help. 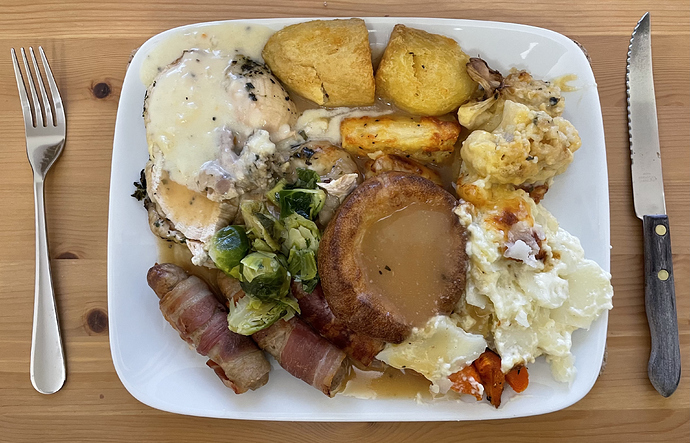 Later on today (i.e. after I’ve been to bed and got back up again) Calvin and I are off to a suite in a luxury hotel for two nights. So, you know, there are many, many people who are worse off than me.

But, as Ally McBeal explained, my problems are so much more important than anyone else’s because they’re my problems.

A Merry Christmas to you all. (Except the ones of you I don’t like.)

PS Here’s where Calvin and I are staying. We were last here for Christmas 2017. 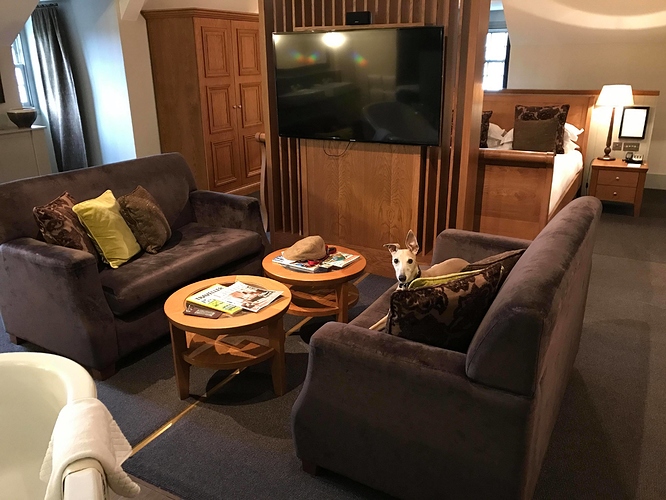 PPS The whole thing — two nights in the suite, all food included, at Christmas itself — is costing less than that one night I had at the damned Poly in the summer of 2018. WDW are thieves.

the UK — or Plague Island

A Merry Christmas to you all.

Merry Christmas to you and Calvin!

And thanks for the hearty laugh, as always.

Merry Christmas Matt. I hope you and Calvin have a great stay.

Dude. I’m all but trapped in NY.
The rules for returning if we do dare leave are quite oppressive. Now - it’s better than it was. Assuming you can find somewhere to get tested without symptoms.

Anyway - the locked in feeling is one that crushed my spirit all summer long. I commiserate with the trapped feeling.

The only ray of light is that 2021 is the year DH looks for a job in another state. And I look at Zillow every day.

Glad you have a nice luxury stay ahead of you!!

I’m so glad you’ve been able to get away, even if it’s not WDW.

Well look at Calvin all happy as a clam posing for a picture. Happy Christmas

New York has said today that travellers from the UK have to quarantine for two weeks on arrival and that marshalls will be sent to their accommodation to check that they are doing so. Will that apply to someone merely wanting to change planes in New York?

Welcome to New York! Once you come in you can’t ever leave. Because if you leave you can’t come back! As @qwerty6 already said, we’ve been locked in since March and it’s oppressive. You should be able to change planes without a problem as long as you don’t exit the airport. But if you do try to leave the airport they will indeed hunt you down. Although the governor said today that he wants to start requiring covid testing for all UK passengers, so the end zone is always shifting. (And what the all-powerful governor wants, he gets.)

I feel your pain. Our own January trip went poof yesterday. Mostly because of the overly complicated New York travel restrictions. And, you know, the ‘Vid.

But, as Ally McBeal explained, my problems are so much more important than anyone else’s because they’re my problems.

I was never really into Ally McBeal. I only watched a few episodes, but that quote is from one that I did watch and it has stuck with me ever since. It helps me keep perspective sometimes.
I was watching Modern Family earlier and the blonde actress who said it was in it, so I was literally thinking that quote to myself just a few hours ago!! Anyway, that’s random!!

I hope you have a lovely Christmas. The suite looks fabulous!!

Calvin is adorable, enjoy and Merry Christmas to you!

Truly, I am sorry for your sadness. I am glad you have Calvin, a canine rock star if ever there were one, with you for this most difficult of Holiday seasons in our generation. Peace, Love, and Hope to you over there in our Mother country.

Merry Christmas, Matt and Calvin! I truly hope you are winging your way stateside very soon.

Have a very Merry Christmas Matt and I hope the rest and relaxation helps.

Your Christmas lunch looks amazing! As others have said, living in NY has forced us to be stuck in NY. We recently cancelled a Jan trip as well and it does suck rocks. I keep throwing it out there that we could fly down in the am and fly back home the same night in a whirlwind trip bypassing the quarantine requirements because we’d be there for less than 24 hours. I almost had my people on board with the idea, but we’d be spending less than 4 hours in the park based on the flight schedule availability. Some of us are practical and thought that was absurd. I have full faith that you will seize the opportunity to fly over as soon as restrictions are lifted. And it will be an amazing trip. Enjoy your Christmas holiday with Calvin in that lovely hotel!

Plague Island made me laugh! I hope you and Calvin have a very merry Christmas and you feel more positive soon. Things will get better.

A Merry Christmas to you all. (Except the ones of you I don’t like.)

Merry Christmas to you too! (Even though I was clearly in the excluded group

Even though I was clearly in the excluded group

Don’t be ridiculous. Of course you weren’t in the excluded group.

You are the excluded group.

Merry Christmas to you and Calvin! I hope you can get your trip in soon.

That’s a great looking lunch - and Merry Christmas! is all I’ve got as a response to your woes.
Here’s to all of us having a better year next year.

You are the excluded group.

Merry Christmas to all here, but especially Matt and Calvin.

I am in NY and pining for FL but for me it is to see my parents. To travel is too many hoops and I fear exposing my parents.

My Christmas wish to all is to stay healthy, and that we can attain a new normal state soon that we can travel as we want. Especially to the magical expensive land that is Disney.