Continuing to vaguely monitor possible developments for any Florida impacts… 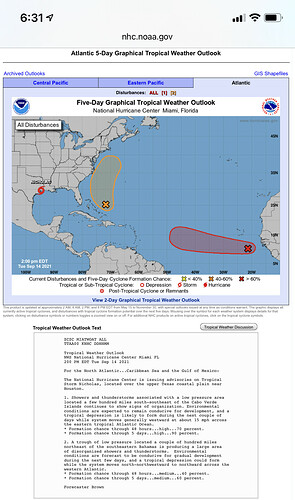 Here’s what are local experts are saying so far about the red one off Africa.

“…it appears that the models are split into two camps with respect to 95L. Those that strengthen it quickly over the next few days turn it north into the open Atlantic quickly. Those that don’t, keep it coming west or west-northwest into the islands or just north of there by the weekend. So far as I can tell, there is not one single ensemble member of 85 on either the GFS or Euro that delivers 95L into the Gulf of Mexico.” 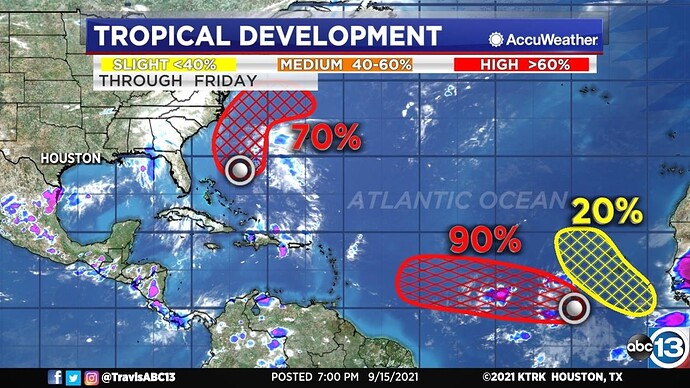 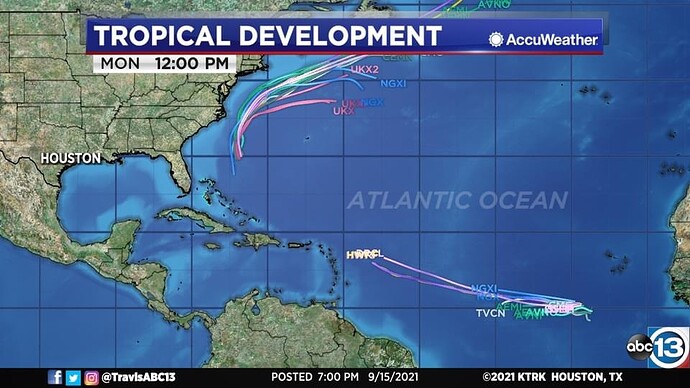 Local damage report. Good progress is being made in restoring power in Texas but still working on it for many. Power restoration in Louisiana is limping along. I’m a little concerned whether they can get all the parts they need for “rebuilds” in Louisiana since electrical system parts was what caused DD20’s new apartment construction to be delayed by at least 2 months.

Tons (probably literally) of small branches and leaves down all over my immediate area. Driving around the last few days, every few blocks there will be a tree, fence, or stop sign down, but not seeing significant structural damage. There are several school districts in our county still closed due to power outages but we started back up yesterday.

Next, the NHC is watching disorganized showers and thunderstorms associated with a low and a tropical wave located between the Cabo Verde Islands and the Lesser Antilles. Odds are 60% of the system becoming a tropical depression in the next 48 hours and an 70% chance by next week. The system is expected to march west across the tropical Atlantic. Finally, a tropical wave emerging off west Africa has a 10 percent chance to form into a storm in the next two days and a 20% chance over the next five days, the NHC said.

If these systems form into tropical storms, they would be named Tropical Storms Odette, Peter, and Rose. The 2021 season has already seen 14 named systems, including five hurricanes, three of which have been major hurricanes of Category 3 strength or higher. 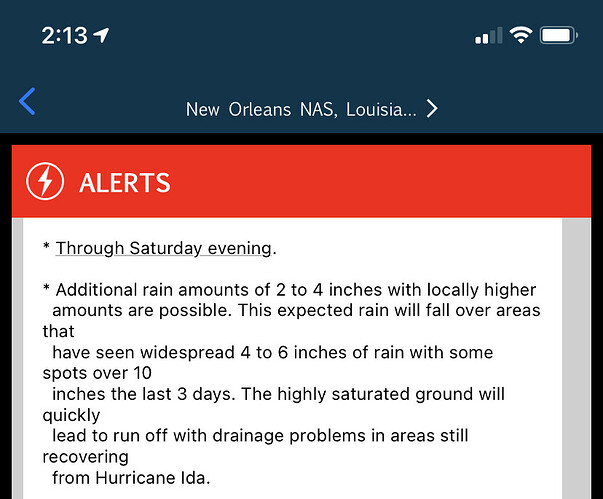 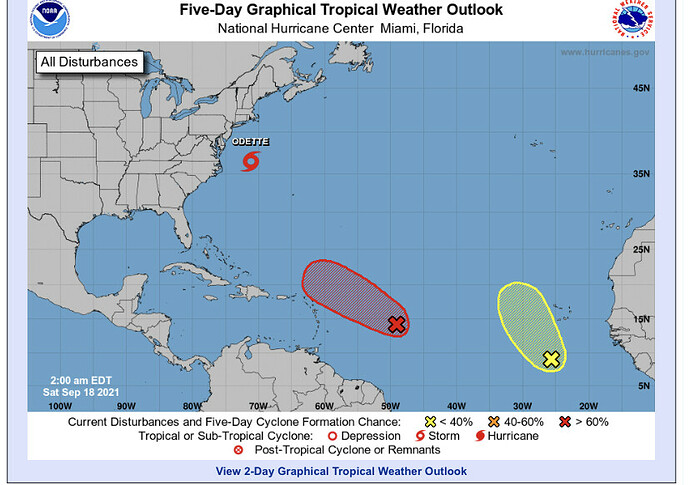 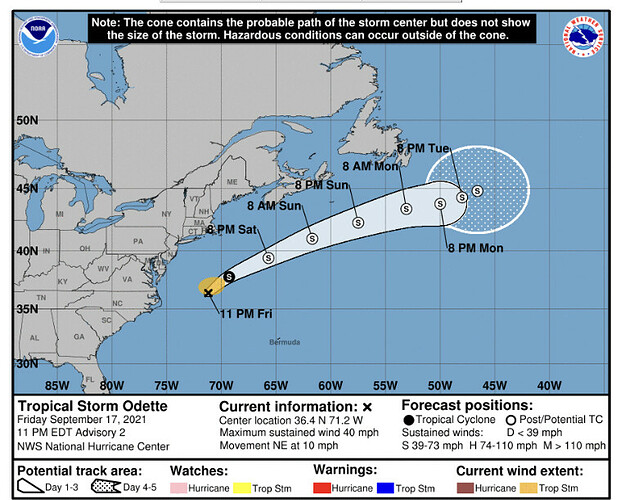 “On the forecast track, Peter is expected to pass well to the north of the northern Leeward Islands on Monday and Tuesday,” according to NHC senior hurricane specialist Stacy R. Stewart. “The outer bands south of the Tropical Storm Peter could produce rainfall totals of 1 to 2 inches across portions of the Northern Leeward Islands, including the Virgin Islands, as well as Puerto Rico late Sunday into Tuesday. This rainfall may lead to areas of urban and small stream flooding.”

Odette, which had formed Friday evening off the mid-Atlantic coast, became a post-tropical cyclone south of Nova Scotia on Saturday and is still forecast to bring strong winds and heavy rains to portions of Newfoundland today.

Although the NHC stopped tracking Odette, the system is expected to pass south of Atlantic Canada today and Monday. Well, now we have Peter AND Rose, but whatever repellant @ppehap is putting out appears to be working! 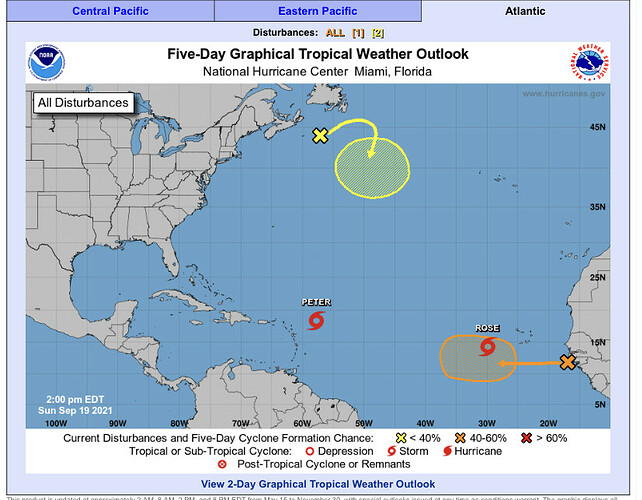 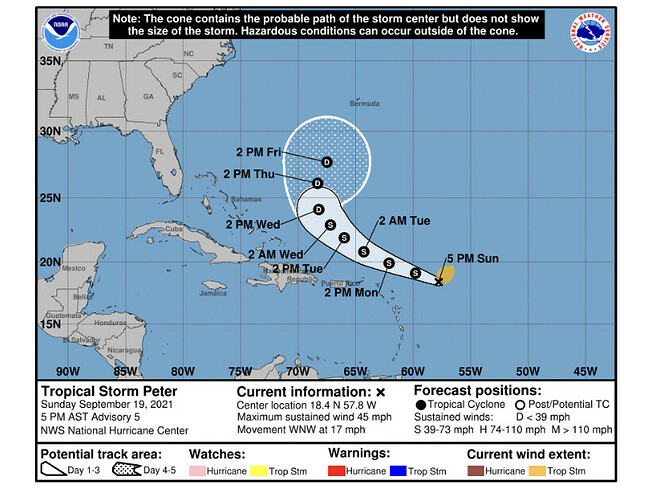 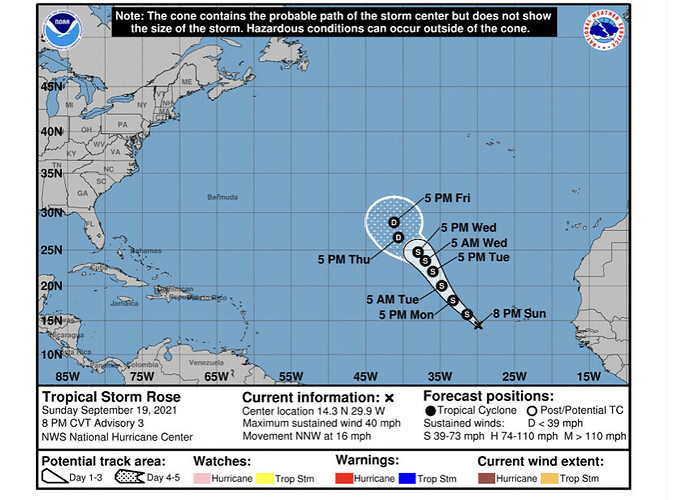 Look out for this one

As of 5 a.m., the NHC puts it about 245 miles east of the northern Leeward Islands, moving west-northwest at 14 mph with maximum sustained winds of 50 mph. Tropical-storm-force winds extend out 125 miles.
“A turn to the northwest is expected to occur by Wednesday. On the forecast track, the center of Peter is expected to pass well north of the Leeward Islands on Monday and Tuesday,” forecasters said.

Its long-term forecast could see Peter headed toward Bermuda. On Saturday, Odette, which had formed Friday evening off the mid-Atlantic coast, became a post-tropical cyclone south of Nova Scotia and is still forecast to bring strong winds and heavy rains to portions of Newfoundland. The remnants of Odette, a gale-force non-tropical low-pressure system located a few hundred miles south of Newfoundland, could acquire some subtropical or tropical characteristics by the middle of this week as it moves east and then south over warmer waters in the Atlantic. The NHC gives it a 30% chance of reformation in the next five days.

Tropical storms Peter and Rose continue to dance out in the Atlantic while the National Hurricane Center ups the odds of a developing tropical wave farther east.

Tropical storms Peter and Rose formed on Sunday and continued to maintain strength despite the threat of wind shear tearing them apart on Monday. As of 5 a.m, Tropical Storm Peter had sustained winds of 50 mph and was located about 105 miles northwest of the northern Leeward Islands, moving west at 12 mph.

Peter has a far reach with tropical-storm-force winds extending out 175 miles, but the storm is no immediate threat to land and is expected to turn northwest and more north into the open Atlantic this week. The NHC warns of some rainfall that could lead to urban flooding in the Leeward Islands, Puerto Rico, and parts of Hispaniola, the NHC said.
Peter is expected to pass near the Virgin Islands and Puerto Rico later today and, its long-term forecast has it threatening Bermuda by the weekend as a tropical storm. Meanwhile, Tropical Storm Rose is slowing down. At 5 a.m., the NHC reported the system having 45 mph sustained winds and is located about 880 miles from the Cabo Verde Islands, moving northwest at 20 mph. Forecasters expect Rose to slow down some more today as it moves north into the open Atlantic. It is no threat to land at this time. Also, to the north, the remnants of Odette remain a storm-force non-tropical low-pressure system located 700 miles west-northwest of the Azores. They could acquire some subtropical or tropical characteristics by the middle of this week as it moves east and then south over warmer Atlantic waters. However, as the system enters the tail-end of the week it is expected to encounter hostile hurdles preventing reformation. The NHC gives it a 20% chance of reformation in the next two days and a 40% in the next five.

The NHC is also monitoring a tropical wave located several hundred miles south-southeast of the Cabo Verde Islands, showing greater potential of developing. The system is moving west at about 10 to 15 mph and heading into an ideal environment. The NHC gives a 50% chance of it forming into a tropical depression in the next two days and an 90% chance of developing in the next five days.

If it forms into a tropical storm, it would be named Tropical Storm Sam.

Oh Sandy
Your the one to watch 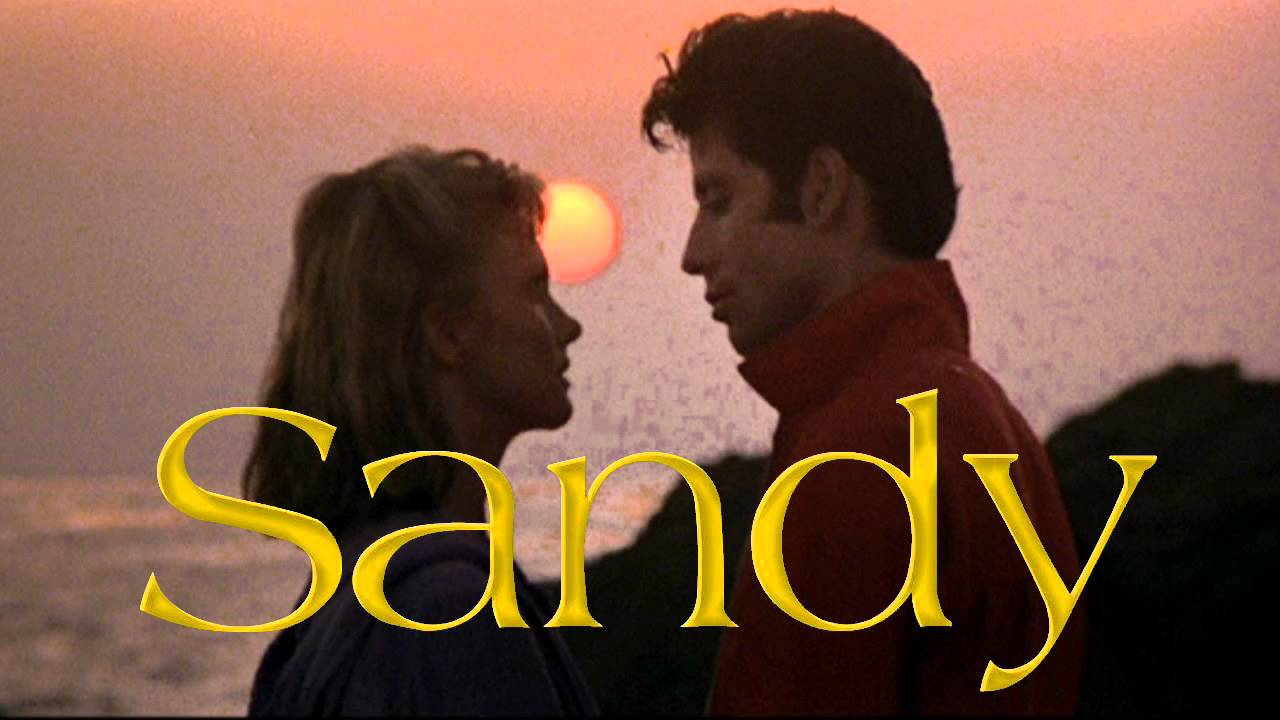 Sooo confused… when did Sandy change her name to Sam? Hurricane Sam has formed into a Category 1 storm that’s expected to rapidly intensify into a major hurricane by Saturday, the National Hurricane Center said.

Sam became the seventh hurricane of the season Friday morning with maximum sustained winds of 75 mph with higher gusts, moving west at 15 mph, according to the National Hurricane Center’s 5 a.m. update.
The storm’s reach is fairly small with its hurricane-force winds reaching 15 miles from its core, and its tropical-storm-force winds extending 60 miles. As of the latest update, Sam is 1,470 miles east-southeast from the northern Leeward Islands.

It is still unclear whether Sam will affect Florida or any part of the United States.

U.S. models have the storm continuing to move west toward the Caribbean, but most projections have Sam pushing north just before making landfall in Dominica. European models have Sam making a more aggressive push into the Caribbean before turning north. Satellite images show Sam has an impressive structure in its early days with a small but well-developed inner core, according to NHC hurricane specialist John Cangialosi.
Sam should rapidly intensify into a major hurricane gaining category 4 strength with maximum sustained winds of 130 mph by the end of the weekend. The storm should slow down by mid-week and level off in power.

Meanwhile, the NHC is keep its eyes on three other disturbances in the Atlantic. Also, to the north, the remnants of Odette remained a gale-force non-tropical low-pressure system located 600 miles west-northwest of the Azores. It could acquire some subtropical or tropical characteristics by the end of the week as it moves east and then south over warmer Atlantic waters. However, as the system is south this weekend, it is expected to encounter hostile hurdles in the form of strong upper-level winds preventing reformation. The NHC gives it a 40% chance of reformation in the next two to five days.

Another tropical wave is expected to move off the African coast by Sunday. It should move into a favorable Atlantic environment for development, the NHC said. The wave is forecast to move west between 10 to 15 mph. It has a 40% chance of developing into a tropical depression in the next five days.

Also, the NHC is keeping its eye on a surface trough associated with thunderstorms a few hundred miles southeast of Bermuda. There is a 20% chance of a depression forming in the next two to five days as the trough could interact with an upper-level trough, nudging it in a developmental direction.

So far, the 2021 Atlantic hurricane season with 18 named systems is the third most active behind 2020′s record year and 2005. Sam became the seventh hurricane to form so far.

Sooo confused… when did Sandy change her name to Sam?

They usually make the name lists very far out - likely before Sandy happened. Because of the destructiveness of Sandy, the name was retired. It’s very possible that the source for the names you have looked at a non-updated list and Sandy would have been slated for a second run had she not been so destructive.

You are correct, but I know they said Sandy on my local evening news a few days back and I remember the spaghetti model too. I didn’t even consider history.

I bet the meteorologist got confused?

They probably goofed and had looked at an older list or just misspoke and mistyped on the model.

That’s what I’m thinking. They could have just gotten confused or pulled an earlier iteration of the 2021 names before Sandy was retired. 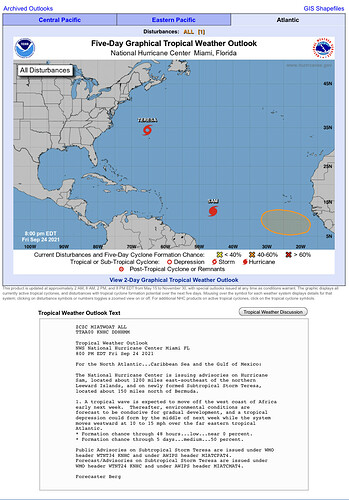 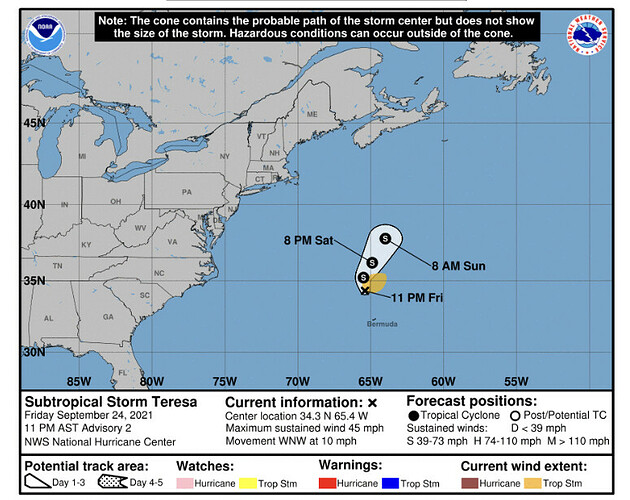 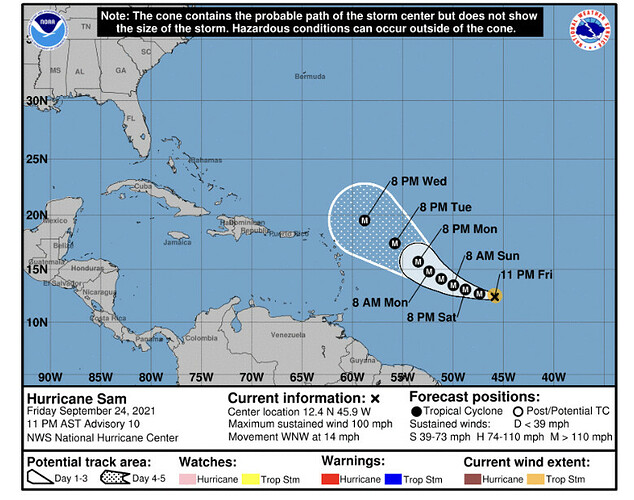 image779×614 139 KB
Our local weather guys are saying an east coast landing of Sam is “possibly but unlikely”.

They just keep coming though. Only 6 more names until we get to Delta…please tell me that is NOT where this is headed…