Who has stayed at Poly & BC? Opinions of mono resorts vs. my beloved BC

I am starting to plan next year’s trip (first or second week of Sept) and I want to go ahead and make a resort decision because I am going to be traveling with a group and need to get everyone on the same page.

I have stayed Pop, AKL, BC x2 and AOA Cars Suites. My heart is at the Beach Club and I love love that resort (the pool, the smell, the decor,back entry to Ep, etc.) but I have never stayed at a mono resort. I have always wanted to stay at the Poly b/c the Volcano pool looked so cool and we love all of the meals there! Lapu Lapus are my favorite drink and 'Ohana is a little bit of fantastic. Anyhow, my group will consist of DS6, DH, and then my parents (in their 60’s) and then my sister and her DD9, DS 6 (it will be their first trip to Disney) and then another friend and her daughter. I would like to minimize walking for my parents but they stayed at BC this year and did love it so I am sure they would be fine. I will have a car, so that is not an issue.

I know I am rambling but I am so torn and I really want to pick and stop going back and forth! I am guessing all of the construction will be finished by next Sept but will the new pool be too crowded? Would you choose mono resort over BC?

Take money out of it and tell me which one to pick because I am completely torn and I need to make a decision so that I can get the group on board.

Given that there is no guarantee poly will be done by then I’m inclined to say go with your gut. But if you spend most of your time at mk I might change that to try something new but maybe not poly lol. Have you considered renting points at wl or blt?

We have stayed at BC and Poly although it has been number of years, especially for Poly. I would be worried about the construction. I’m not sure when that will be done but if it is expected to still be going on, I’d avoid it. I think a lot of it depends on where you are spending most of your time. When staying at EP resorts , we always end up spending more time there. If you want more time at MK then a monorail resort is nice. We prefer CR or BLT to Poly but that is partly because we like to walk to MK. I always found the Poly pool to be crowded but I had the same problem at SAB.

I have done Poly, Beach, GF, CR, YC, BW, AKL and PORS and POFQ - I feel your worry over making the decision.

The Poly is wonderfully charming, smells great and the location is very magical - when it’s not under construction. Captain cooks at Poly and the new Pineapple Lanai are WONDERFUL bonuses for staying at that resort, as will be the new trader Sams bar. But all of that is dependent upon the construction. Poly is our favorite and I have been watching Tikiman very closely for updates:

On Monday “Tikiman” was on the WDW Today podcast with very good updates and what I came away with was “late summer” which in Disney speak means September for an open pool, completed Great Ceremonial House and Trader Sams. I am not sure if the quiet pool update will be done by then. It’s worth a listen:
http://www.studioscentralradio.com/shows/Episode_1411_-_10-20-14.mp3

I have booked our 2nd week of September trip for low crowds at the Poly.

Meanwhile, the Beach Club is due to begin it’s refurb in December. A full refurb includes all the rooms, but also the halls, gift shops, laundry and should include the pool. SAB would be a big one, but initial news says it’s going to be a 20 month effort. Storm Along was last refurbed in 2009. The water parks get done every year / trading off being closed. The water slide was done in 2013 at SAB. Not sure if it would be done again, but it’s been 5 years… 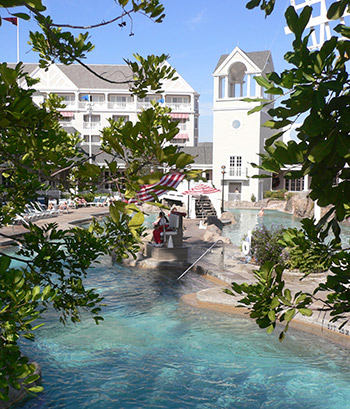 The first major refurbishment of the Beach Club Resort since it opened in 1990 is about to get underway.

For me, when I love a resort I want it all to be open. In September you will find DHS and AK in full green walls and DTD will still not be completed. The Magic Kingdom should be done and I have yet to hear any great effort to be made at Epcot. All that to say, it would be very nice to have a resort that was construction free. Poly SHOULD be pretty good (as long as you are not staying DVC) and Beach Club will be under refurb but we don’t know how extensive that will be.

The Volcano is being removed / cut down. That big “mountain” sat exactly between the view from the Great Ceremonial house and the lagoon / magic kingdom, But from what I hear the new pool area will be wonderful. And yes, staying monorail is a treat! I guess your kids are still MK fans and it sure is nice for pool time / resting.

MagicMN votes: NOT Beach Club for the refurb that will be occurring. Poly is going to be FABULOUS and new and the theme is about the best you will find. Also plan to attend the MNSSHP and take your entire family to the HoopDeeDoo Review (take the boat from Magic Kingdom) and have breakfast at Ohana with the characters. And be sure you buy yourself a nice Lapu Lapu or whatever the fun new drinks are at Trader Sams,

I have stayed at both BC and Poly. Thinking about the ages of the girls and first visits my guess is that you would spend a lot of time at MK. My guess is at that time there will be less construction at Poly. From Poly it is an easy jump to MK and EP. How much time do you think they will spend at HS? I think most of us assume there will be a lot of construction there as well (maybe they will have Frozen activities but right now there would not be a lot for your group to spend much time there). Given that you have to bus to AK, I would pick Poly for access to MK.

Yes. Beach Club is getting a refurb too. Details are scarce at the moment. Looks like a big one. http://www.themeparktourist.com/news/20141022/29469/2-big-refurbishments-coming-walt-disney-world-and-1-rumored-disney-california

Thank you for all of the awesome advice and info! @MagicMN I am going to go listen now- great tips! I am so torn but now you have leaning Poly. Definitely we would spend a lot of time in MK, Ep woukd be next, followed by HS and AK the least amount of time. I hate decisions!

How crowded do you think Poly pool would be in the beginning of Sept?

I’ve not stayed at BC yet, but the Poly is a wonderful place to stay. I’m afraid I’m going to miss it terribly on our next trip.

The Poly pool will be no less or more crowded than any other pool. Part of the Poly update is new kids play areas and infinity hot tub/ spa and new pool bar. The new design will provide more space and the Poly beach area is adjacent.

Follow Tikiman and listen to the updates. With the completed pool and Great Ceremonial House Poly is my first choice. Good luck!

I emailed tikiman directly off his website with a few questions and he actually emailed me back. Seems like a really nice guy. you could email him and see what his thoughts are .

I would choose Poly in this case. The construction should, in theory, be at least MUCH closer to done than it is now… and the proximity to MK by the monorail AND to walk to TTC and monorail to Epcot is awesome. When the construction is done, the Poly is a fantastic resort, and IMO would be worth the chance that far out. I’d definitely go Poly. Especially because its a first trip for your sister’s family… having the boat and monorail to MK will be great for them. AND the proximity to so many great restaurants for your parents on the monorail, with minimal walking.

I think you guys are right and I am def leaning towards the Poly. I did facebook message Tikiman and he quickly responded. He said there is no certain date of pool completion but he is planning an Aug trip and feels it will most likely be complete.

I think my only reservation is that I love the bright, cheerful feel of Beach Club-the bright colors and décor. I used to consider the Poly my “dream” resort but that was when the volcano pool and water feature foyer were still there-to me the “vibe” was awesome. When I was there to eat two weeks ago-the vibe was just different. I am sure that is bc of the construction and I am sure it will be fantastic when it is complete. I just like bright rooms- (i.e. I didn’t love AKL bc the rooms were so dark, dreary) but from the photos I see, the Poly rooms do not look as dark as AKL.

Sorry, guys, I know I am TOTALLY over-thinking this room decision for a trip that is 300 days away. LOL, my OCD planning-brain is such a pain!

And it’s official-it’s Poly for the win!! I am getting excited and I am crossing my fingers for open pools! I will miss my Beach Club but with the large group we have going and the kids (ages 6-9) I think the easy access to MK will be hard to beat. What are your suggestions for standard room Longhouses? Thanks again for all of the great info.

Poly is my favorite resort, but you should know that some rooms can be dark like AKL. You might request a 3rd floor room (no balcony above to block sun) and a South-facing room if possible (South supposedly gets the most daylight–I think?). It’s never bothered me in the least, but I’ve read others complain about it.

Thanks, great ideas! I