Which floor is lobby level at WL/CCV

trying to decide on a room request

I think the lobby is on the same level as what TP calls Floor 2 in their WL room location maps. I found real floorplans on Wilderness Lodge plan | I always like doing the plans of hot… | Flickr and compared them with TP’s maps of Floor 1 and Floor 2.

So the Floor 1 of the normal hotel rooms is down one level from the lobby.

But I’ve never been to the rooms, so I can’t say firsthand.

I think this might be a trick question. The elevator off the lobby has the lobby as floor two. There is a stairway off the lobby (by the bathroom). Those stairs exit on the 4th floor.

My son says the lobby is floor two and Roaring Fork is on the 1st floor. I think he is right.

My son says the lobby is floor two and Roaring Fork is on the 1st floor. I think he is right.

I’ll have a standard view studio with a walk-in shower. Just for one night. So that’s a very specific set of rooms and they almost all have a decent view. I’m just trying to figure out what floor I’d like to be on

Thanks all for the input!!

I just looked at the room finder and both of those rooms are now classified as “Nature Fireworks View”. While they were the cheapest rooms at the resort, they are now the most expensive.

I requested room 4119 and received room 4103. It was a great location (near laundry and door opened to overlook the lobby)- BUT- WC is LOUD after 10pm. Also, the views in that area are impacted by work down on the grounds: 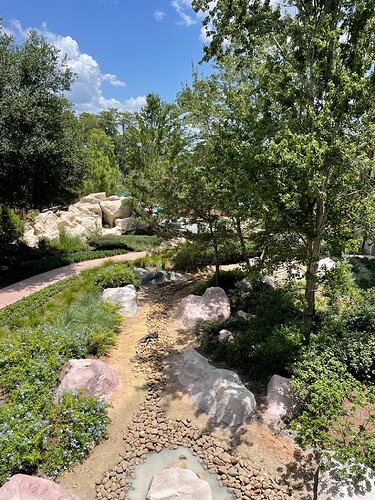 I was looking at 5119 actually

The water features from the lobby to the pool are shut off. They are working on the rocks.

I won’t be there til September. Do you think that will be done yet?

Oh! I would hope so they were spraying rocks at 6am on Friday. It is not all torn up.

Was that a good location overall?

We will be arriving late so my main concerns are:

It is a great location! It is right off the lobby, there are three elevators right in the lobby that lead directly to that area. The elevators are fast and we never had to wait. Your requested area is quiet.

I don’t think the room you are requesting is connected to a 1 bedroom, but check that? Those doors seem to let in more sound than other resorts. It is kinda surprising. Also, I know it might not matter with a one night stay but the mini refrigerator does not have a freezer section. I didn’t remember that.

It’s been a few years since we stayed there but I’m pretty sure your only option for morning coffee is Roaring Fork. It’s on the first floor of the WL wing. There is a secondary elevator in the wing that is right next to it, so you can bypass going through the lobby.