Where is the "part 2" of the one day two park plan?

… and it shows a “Universal Orlando Highlights One-Day/Two-Park Plan (without Early Entry) PART 1” which mentions a part 2 in the middle of the plan. Where is this part 2?

I want a plan for both parks that hits all the best of Harry Potter with the Velociraptor and Kong.

On the IOA plans page:

Or, on the actual Touring Plan under “Additional Notes”, the other part(s) of the plan will be listed with a link: 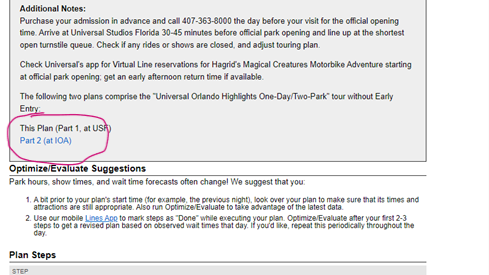 Ah, my mistake. I am actually looking at the " One-Day/Two-Park Plan WITH Early Entry PART 1" and this one does not have that link to part 2 in the description. Does the same “part 2” (linked in the "without Early Entry) work along with this plan?

Note that if Early Park Admission is not available in USF during your date, you’ll use these plans:

We’re staying at a Universal resort. Any reason why there would not be Early Park Admission on Jan 31?

Looks like IOA has early park entry on January 31st.

(Up to 1 hour prior to park opening)

Edited to add: Often only one park has EPA at one time except during the busy holidays. It’s most likely going to be IOA.

Thanks. Yes IOA only through February. (According to the app)