What say you: room configuration?

So DD started kindergarten this past fall and we have made a new set of friends! They live only a mile away from us and they have a son who is the same age as our son. We’ve started spending lots of time together on the weekends and everyone gets along swimmingly. They wanted to go to Disney but were daunted by the planning. So now we’re (I’m!) planning a trip all together for late spring next year.

I’ve started looking at rooming options. We could do two separate rooms or we could go for a two bedroom villa (I think the grand villas are probably beyond our budget). But in the 2 BRs, I’ve only seen it where there’s a king bed in one room, two queens in the other, and a pull out couch in the living room.

Why doesn’t Disney have 2BRs with two queens in each bedroom so the adults can enjoy the living room after kid bedtime? And how do you choose which married couple has to have kids in their room while the other couple has total privacy?
Are there other room options I’m not thinking of?

Like I said, our budget probably caps at a 2BR deluxe- though I think maybe that makes the grand villa at SSR affordable to us? Is it worth the location trade off?

Any and all advice please and thank you!

Opt for separate rooms. Even the best of friends (and family) can use a break from each other from time to time. Most importantly it gives the little ones a little more privacy, if they’ve had too much stimuli and need a quiet break/nap with out worrying about another family coming in and potentially being loud.

And how do you choose which married couple has to have kids in their room while the other couple has total privacy?

This one is easy - the host couple (planner - that means you) get to decide. And no guilt allowed.

Hi - I would vote for separate rooms. I think since you’ll be touring together and eating together it might be nice to have some separation at night. That might be easier. If you decide to go the two bedroom route, all of them have the one room with the king bed. There are none where you have two bedrooms each with two queens.

Definitely separate rooms! All together all the time is a lot, especially during a busy/intense trip like Disney. People need to be able to withdraw, and the kids need to get good sleep (harder with their friend in the same room!).

We’ve shared cabins/houses with families we know well, but that’s a lot larger than even a 2BR and a very different type of trip than Disney.

Go for separate rooms. There’s such a thing as too much togetherness.

Since most people are in favor of two separate rooms (including me), what do people think about connecting vs not?

Pro: easy to go back and forth
Con: too easy to hear any noises, including comments/gripes from the other family that maybe should be private.

Connecting is no different than sharing a unit, so if people are not in favor of a 2br then this would be a no.

Adjoining may even be too close for comfort

I would probably opt for a travel-with number to connect the two reservations so that they will be nearby to one another but neither connecting nor adjoining.

This is all so helpful. One of the reasons we considered the 2BR is the kitchen. With littles, it’s often easier to have that type of access in the am for breakfast or midday breaks or leftover dinners.

Are there resorts that have 1BR plus standard rooms? Or are they all 1BR + Studio (which I think then increases the cost significantly)

They would be 1BR+ Studio which = 2BR lockoff

I would definitely do separate rooms. If separate deluxe priced rooms are an option BC, BW, CC/BR, Poly, GF, AKL Jambo all have DVC and regular hotel rooms.

Another to note is 2 studios are cheaper than a 2 bedroom if using points. If you did 2 rooms and the kids did want to share beds they could trade off which parent room they want to sleep in. Or if each family stays alone having 5 sleep surfaces may be a thing to consider too.

Throw me on the separate room pile as well.

No matter how much planning we do, Disney is still stressful. ESPECIALLY with littles.

“Perfect” days only happen because we plan so much. Ok, well, when you all plan so much. I’m happier in my “wing-it” corner of the forums.

Regardless, adding another family just adds undo stress on the planner, pressure on the visiting family, and massive overload on the kids with “too much of a good thing syndrome”. I think you’ll be happy for the quiet time separate rooms will bring.

Side note: I love coffee first thing while everyone is still asleep. My excitement gets me up before anyone else and I get to enjoy my Disney coffee while looking out over the lake/parks/trees/dumpsters/rooftops, building excitement for going out and wandering aimlessly (I’m totally using that for my next title!).

At least each set of adults could get some privacy 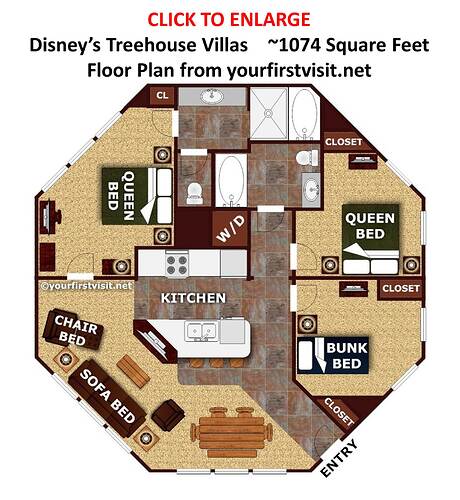 I would do a Studio + 1BR, non-adjoining, non-connecting at a resort of your choice. That way you can have the kitchen, but also have privacy. Your family gets the 1BR since you are in charge. The other family can come eat with you, if desired.

The Treehouse would be an acceptable option if you don’t mind the downsides of that resort (sprawling size, travel time, etc.) and are ok being a together.

I would highly recommend separate rooms. Can you fit two 1BR in the budget?

Why doesn’t Disney have 2BRs with two queens in each bedroom so the adults can enjoy the living room after kid bedtime?

Many adults like to have a king bed in a room with privacy while the kids sleep in the living room.

If you’re doing two lodging quarters I’m with Jeff. The one bedroom gives you the full kitchen and laundry which is handy with two 7 yos and two 4 yo. Of course this one goes to the planner.

“Traveling with” puts you near each other.

In the one bedroom my preference would be the pull down bed in the living room - if you’re at a resort that has these (SSR).
This leaves the king bed for two kids, either siblings or 7 year olds or 4 year olds.

I don’t know if you’d feel comfortable leaving 2 kids sleeping on the pullout in the studio while visiting in the 1 br living room. Would baby monitors work?

We have shared 2 bedrooms with other travelers - friends and cousins, as well as extended family that is almost immediate family. (Most did not involve 4 kids. )

My thought is stay in the 2 bedroom. With each family having a 4 yo, y’all have heard ‘parent correcting kid’ plenty since fall. I’m fairly sure your parenting styles are close or you wouldn’t be close. It’s only a week, yes? The logistics of things like snacks is way easier with a 2 bedroom. Set ground rules. Our place is this room and between certain hours we keep this door shut.

I’d have a couple of air or foam mattresses in the king bed room for your kids. Mom & dad have the big bed and the kids get the “fun” beds [on the floor]. Leaving the living room as public. And buffer between family time.

There’s no end to the ways you can use the carrot of sleeping over with your friend when everyone’s in the 2 br.

I agree. I’m in the 2 bedroom camp and definitely splitting it that each family has a bedroom/bathroom and living room is joint space.

That way when kids go to sleep adults have some unwinding time together. Or it even opens the possibility of taking turns having a date night. At those ages you’ll possibly all be out late together a few nights but likely the kids will need some earlier nights too. At least my kids, they couldn’t hang for too many late nights at those ages without it catching up to them.