What is the point of World Showcase

For the record, ALL of the original WS countries were in part, if not completely, funded by the countries themselves.

Is that accurate? My understanding is that attempts to get the governments failed, and so they resorted to getting sponsors from companies WITHIN those countries. I believe Morocco is the first country to actually have government funding involved.

Well, firstly, there’s no point to World Showcse - it’s round.
I was also under the impression that the only country sponsored pavilion was Morocco. Which apparently was a disappointment. (I don’t understand sponsors at Epcot; it seems rather like going to Ikea and saying I need a couch and table, and if I promise to leave an Ikea sticker on will you pay for them)
I once saw Chinese girls go into absolute hysterics over those feng shui cats. Who would ever buy those?!?
Epcot and World Showcase is our hands down favorite park. We have visited every day on some trips.
Mostly because we love chatting with the CMs. They are authentic. One trip a kid in our group had just lost a tooth. So we were asking about the tooth fairy. In Mexico it’s a tooth mouse. Still a tooth fairy in Norway, where we discovered trolls are awful, horrible despicable creatures with apparently no redeeming qualities. Our Chinese correspondent had no clue what we were talking about. Trade a tooth for money? smh

That was it for World Showcase that trip. Still like to find out what Japan and Morocco say about tooth fairies.

I can attest to the accuracy of the Mexico Pavilion. We all have Quetzalcoatl pyramids, boat rides along the river and active volcanos

Is that accurate? My understanding is that attempts to get the governments failed, and so they resorted to getting sponsors from companies WITHIN those countries. I believe Morocco is the first country to actually have government funding involved.

You are correct. I was using “countries themselves” as a general term for foreign dollars. 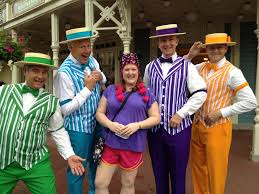 I’m sure glad all american men dress like this.

I’ve not spent much time in Mexico

We have GOT to change that amigo!

that is awesome! I am willing to dress like that every day.

One trip a kid in our group had just lost a tooth. So we were asking about the tooth fairy.

The last time I was in World Showcase I was discussing how much different it felt now, as opposed to my first trip as a teenager, before I had ever left the US. Now that I know what it feels like to actually shop in a Mexican market and sit and drink coffee in a Parisian cafe and celebrate in a German beerhall, I don’t need the Epcot version of those things. But teenaged me needed it and was inspired to actually travel and go see for myself, so I hope it still does that for the kids who see it before they have an opportunity to go see it ‘for real’.

Is everyone looking for Donald in Mexico too? “¿Dónde está Donald?”

Of course! We don our casual wear as shown below and go out every afternoon searching for him. 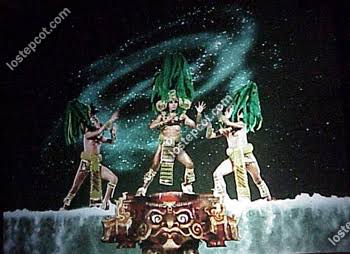 Anyone else remember the early 1980’s horrific giant doll “characters” at each World Showcase pavilion (other than the American Adventure) that were supposed to be a person from the subject country? I have a photo of myself was a kid with many of these characters.

Yes I remember them; I actually thought they were kind of cool. Back then Disney very intentionally didn’t want any “familiar” characters in EP; Mickey and CO were for the MK, NOT EP. I also remember the double-decker buses that used to circle WS.

I knew it! All my friends who go to Mexico to visit “family” have been holding out on me!

Well, not everyone can rock a loincloth amiga!

It has gotten watered down. I remember the WS in the 90s. Maelstrom (Norway ride that is now FEA) was more authentic and my absolute favorite ride in all of WDW back then. I also really like the much more cultural version of the Mexico ride back then. Those rides really did showcase culture and I remember them distinctly years later.

I completely agree with you about Mexico; there’s a rumor of a Coco overlay that’s been around since the movie came out; that would be better than the current version. I have to admit that ever since the first time I rode Maelstrom I was disappointed in it. It felt like half a ride (which in fact it is); it had some very cool parts, but on the whole it was a bit of a disappointment.

I also really like the much more cultural version of the Mexico ride back then.

My mother-in-law is a Spanish teacher and was horrified by those changes to the ride.

I LOVE Coco, I’ve seen it countless times and I am desperate for them to do this. Hopefully in the next 67 days so it’s ready when I get there.