What does 7am EMH RD at MK look like?

So I just got an alert today to say that MK has earlier EMH than previously. It was 8am EMH and our plan was to arrive around 7:15 and RD 7DMT. My DH wasn’t thrilled about a 7:15am arrival, but I’d talked him round. Now the EMH is 7am, but there’s no way I’ll convince him to get there earlier. If we arrive at 7:15 (though knowing my DH I still won’t get him there that early, so more like 7:30) what will it be like getting through? Is it likely to be crazy at that time? Now that we won’t be RD’ing, is it still a good idea to go for 7DMT? TP says 20 min wait if arriving at 7:30, but how would the crowds be like getting there?

Keep looking. More Fast Passes for 7DMT will drop with the extended hours then you won’t have to get there that early.

If you are paying for emh, but not going to get there on time to use the benefit, I hope you have hoppers. Sounds like hubby is not “on-board” with the whole early bird catches the worm plan, which is fine - some ppl are not am ppl. Perhaps a different park would be better if possible. Something to think about. For the $ you’re paying, trying to get to a park for emh, and then NOT getting there on time, might end up ticking you off if you get there and it’s wall to wall people that DID get there on time. 7am is pretty early, so I’d bet a lot of ppl will try their best to get there, but will be late. Cross your fingers, hope for the best.

I’d suggest you watch the Touring Plans You Tube video that Len and Brian did on Magic Kingdom rope drop. They sequence several folks at different times around rope drop to see what the waits might be for 7DMT and PPF.

@parsonsrt can you link that video here please ?

It’s pretty easy to find on the Touring Plans You Tube Channel. 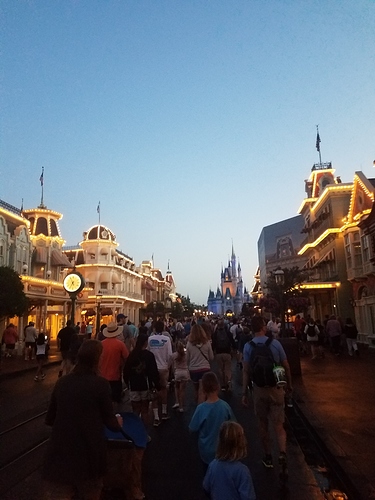 Here is the video

That video’s really interesting! Thanks for sharing! I guess though since the day we’ll be there is earlier than theirs and EMH both those factors would mean probably less waits than they had. I think we’ll go for 7:15 arrival and see how it goes. DH &DD have said they don’t think we should arrive 1 hr earlier to save 20 odd minutes in line.

It’s not just the 20 min you save at 7DMT, it’s a cascading effect. I get it. It’s early. I have a hard enough time getting my crew out for 9am RD!

If they just switched hours then Disney should be releasing fastpasses for 7DMT in the next couple of days for 8-9am.

We did a 7am EMH in November and it was a lot busier than I expected.

At the end of the video, they indicate if you aren’t in the first wave at RD to go to PP instead. I can attest that this is true. Last visit we watched the morning show and headed directly to PP. there was maybe 50-100 people ahead of us heading to the hub bridge at 11 o’clock (left of stage). We waited standby by for PP in less than 15 min.