What do you do in case of torrential rain?

We’ve been twice, for a week each time, and only one day did we have torrential rain—but it was very challenging. I am curious whether others cancel plans or go out into the park in those circumstances. When we went out it was our first visit and our one MK day. I had spent months securing ADRs for CRT and BOG and so that was the one day we couldn’t miss…but, in retrospect I think it was dangerous to go out and I’m not sure I’d do it again. We did have periods with no rain and got to do a lot of attractions. We had fun, but also periods of just plain misery. Later on I heard that there were tornadoes in the area but that didn’t affect us directly so I didn’t know at the time. This time missing a day wouldn’t necessarily mean missing an entire park b/c we have hoppers, but it would certainly be challenging to make up that time by taking away from another park. For the occasional shower we always carry ponchos and umbrellas; I’m talking about the all day terrible storm.

That’s a great question. I have been fortunate to never have torrential rain on my WDW trips. In fact, I haven’t had much rain at all. I think though i’d probably try to push through it like you did. I might be miserable too at times… but I imagine I would have a hard time not taking advantage of the empty parks.

It was pretty amazing to see MK mostly empty when we arrived. It was probably around 9 or 10 am. My friend who’d been there many times took a bunch of pics b/c he said he’d never seen things so empty.

Did Universal during the passing through of the edge of a tropical storm (pics attached). There was a tornado watch but no warnings. Swapped out our IoA day for USF (as it’s more indoors) and otherwise proceeded as planned - it’s just rain! Disclaimer: I am essentially aquatic, perfectly happy to wander round absolutely soaked as long as I’m not also cold - which you never are in Orlando!

Makes the parks less crowded, indeed I attribute our getting on Hagrid at all to said storm clearing out the parks. Had the rain not eventually stopped then we would not have got on anyway of course! We also got rained on a few times at MK, but only for brief periods - did JC, CBJ and PotC while the big rides we had planned (BTM, SM) were down. For an all-day storm at WDW I’d probably do EPCOT, as all attractions except TT are indoors and I don’t mind wandering the WS in rain. HS would be second choice, shows and SDD might be out in bad weather but most rides are indoors. MK and AK don’t seem like good choices in rain, too many outdoor attractions.

One tip - if it’s looking like weather that will close rides at WDW, book FPPs for those rides as soon as possible and they should convert to anytime, any ride FPPs if still closed when the window opens. Ride what you want as a walk on, repeat until bored or weather improves! 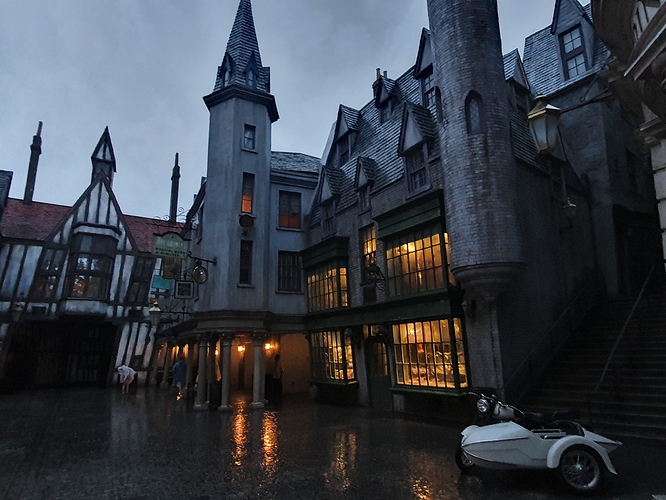 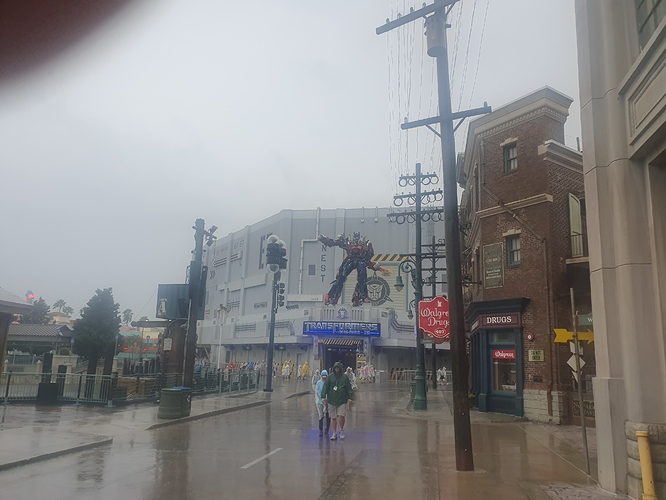 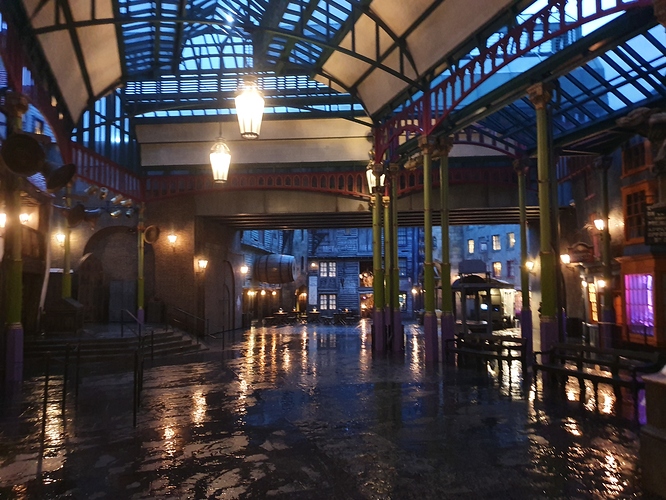 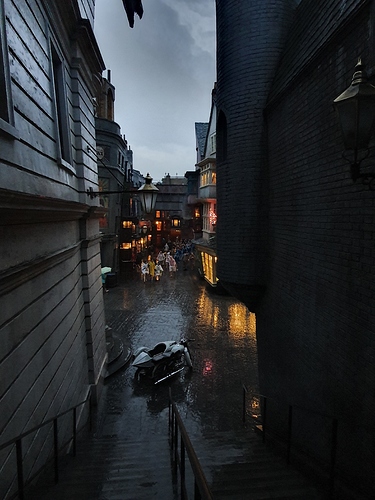 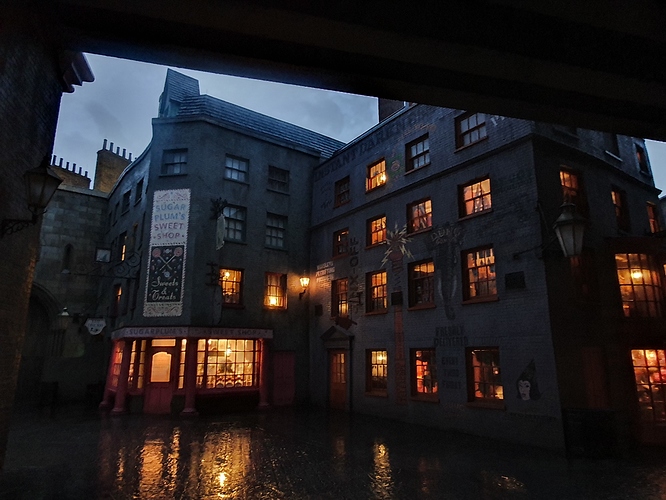 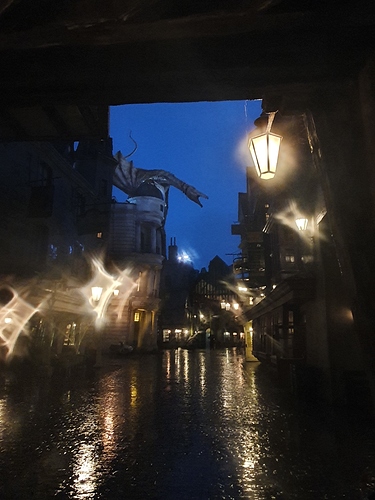 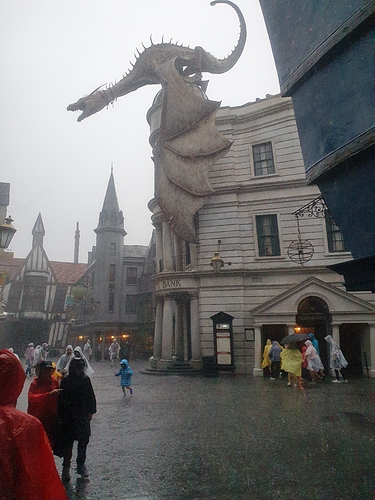 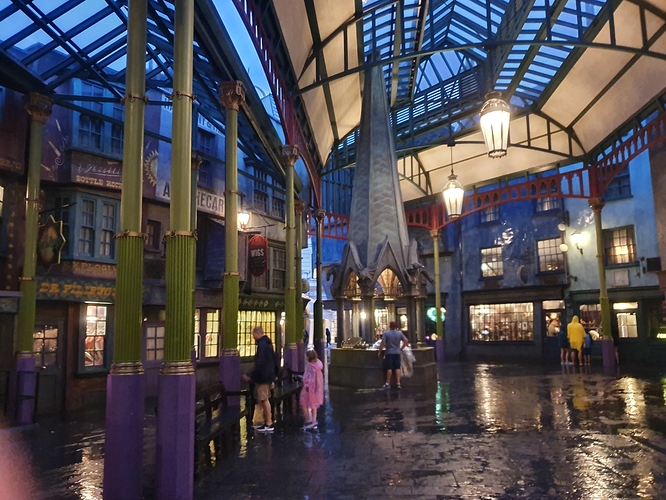 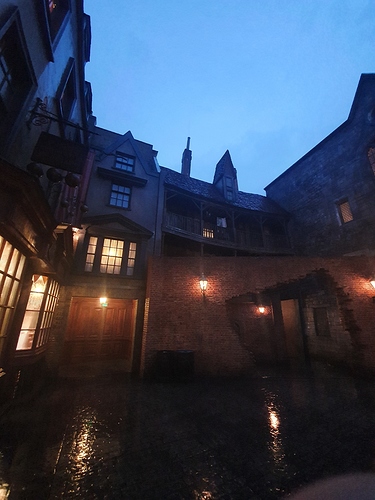 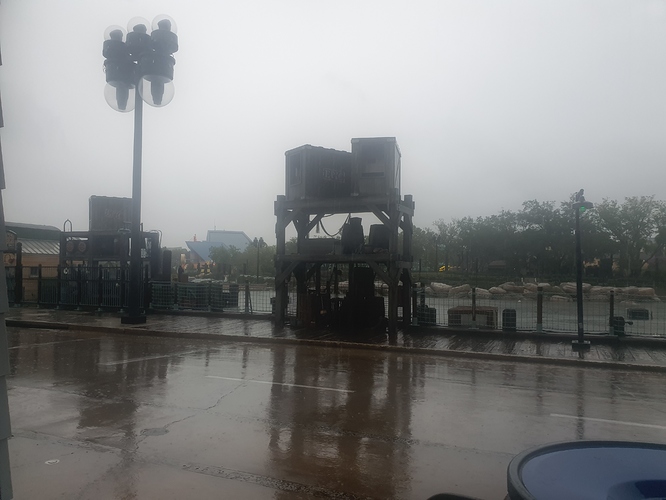 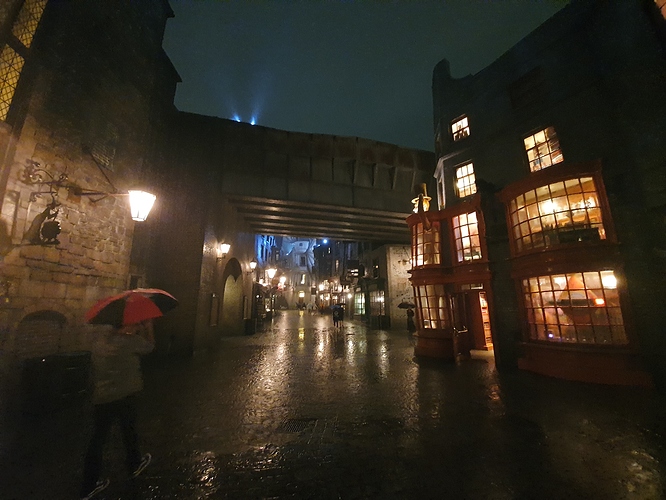 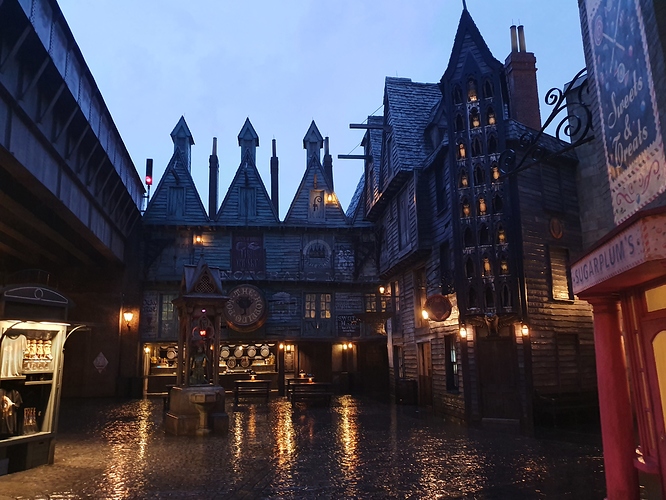 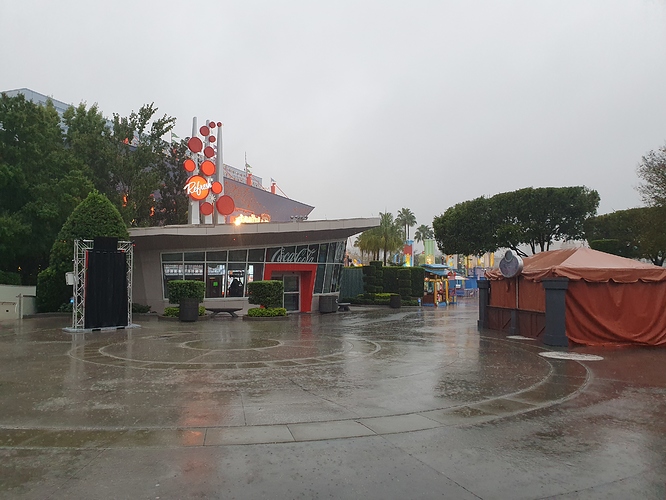 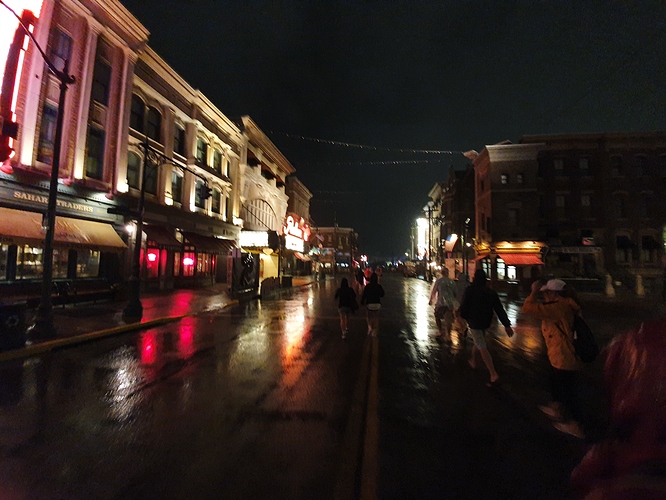 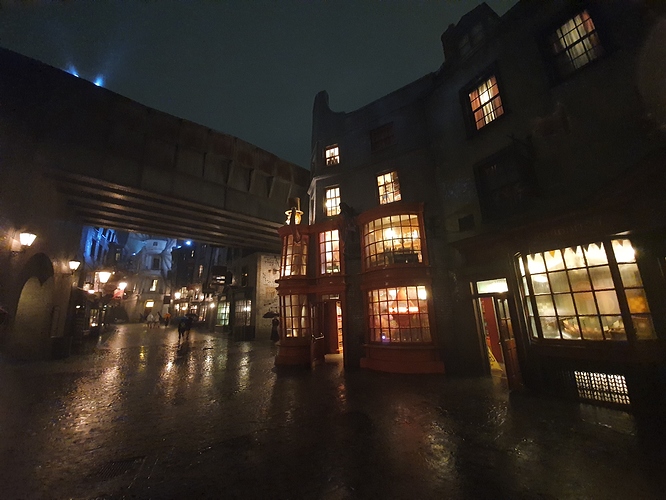 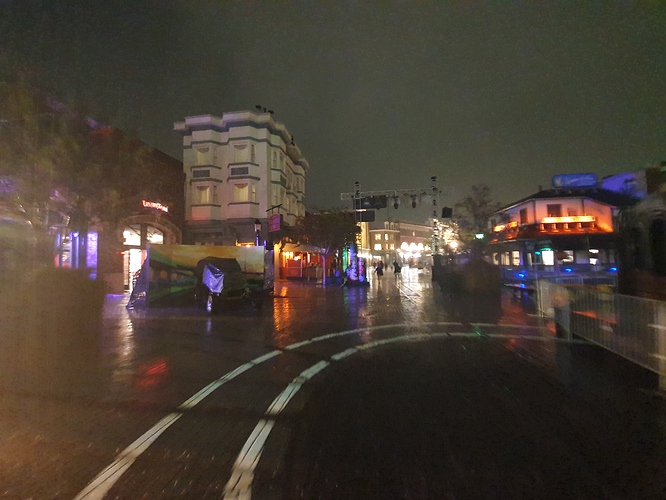 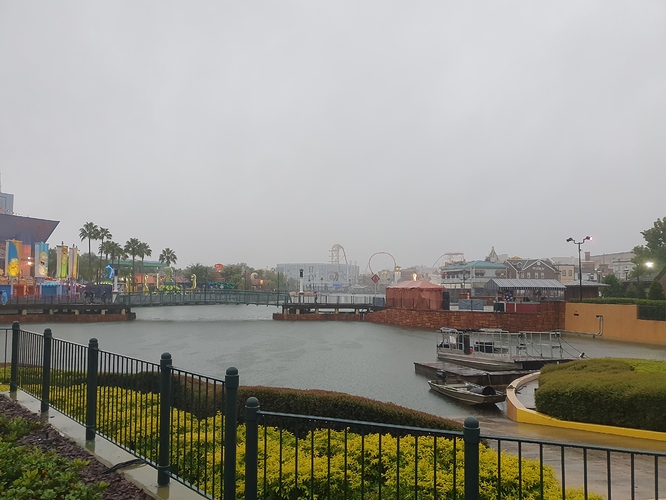 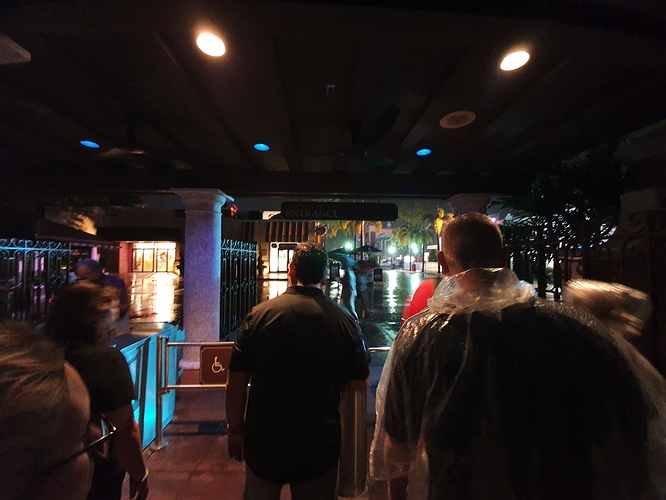 Stay at the hotel. We wouldn’t venture out.

We can spend a pretty big chunk of time in the Seas and Land pavilions in EPCOT in the rain. I think that’s probably what we’d do.

perfectly happy to wander round absolutely soaked as long as I’m not also cold - which you never are in Orlando!

We get wet.
We’re careful what we wear though- no cotton, and Teva sandals for the most part. A rain jacket will keep you mostly dry. The key is to go into it trying not to get too wet instead of trying to stay dry.

The above is from the perspective of my family. If I was flying solo, I’d grab some flip flops and biker spandex and go on a spree.

A true liner would simply:

“Poncho up and carry on”!

With thanks to @OBNurseNH, I think, who coined the phrase.

And I will grovel my apologies if I have credited the wrong person.

Splash through puddles and ride any water rides that you normally wouldn’t ride because you’d get too wet.

Thanks everyone! Pics of Universal in the rain are really cool. As far as it not getting cold in Orlando, I did one time experience bone chilling cold on Black Friday at night. I could see my breath; I think it was low 40s. That Monday I had been wearing shorts in Epcot.

I’m a theme park addict, so probably not the best person to answer. I’ve been there in the middle of hurricane / tropical storm season multiple times. It doesn’t stop me.

I cannot take credit. But I do abide it.

So who was it then?

I think it was born whenTp was born. Or maybe chat.

We even put my Mom and Dad in golashes (we had water shoes) although they refused rain pants! We got so much done and had a lot of fun! We had planned a midday break though, not sure if we would have been happy all day! Went back out in it in the evening and luckily for us HEA went on in drizzle! i think it depends how old any kids are.

Any weather that could be qualified as dangerous, such as tornado watches, we’d stay inside. (Resort if we knew in time, sturdy restaurant or store if already at the parks.) It’s only a theme park and not worth the risk to us.

adult trip: poncho up and carry on!

trip with my 5 year old, play it by ear, try to manage, maybe ride the monorail, do some resort hopping. If shes down for parks then I am too!

We had a day of steady rain during our trip. It was not unsafe to drive and no thunder. It was our final day and our only at HS so we went. Crowds were almost nonexistent and we got repeat rides on TSM and AS2 at Rd. Naturally a lot of the shows and outdoor elements were canceled, but we had raincoats and a stroller cover and hopped from covered show to covered ride and enjoyed ourselves.