WAT - worth it if you can't get the first trek of the day?

Y’all’s reports have just about convinced me to do it (still a bit iffy on the food since I’m gluten-free, don’t do cold shrimp, and don’t do chicken salad - so not sure I’d even get any benefit from the meal), BUT because Up Close With Rhinos was only available on 8/26 I’m left with 8/21 for WAT if I decide to do it.

Is it worth doing if you’re only able to go to one of the later ones?

(And does anyone have experience with the food on WAT and being gluten-free?)

10:15 was perfect for us. We wound up having the food right at noon and didn’t need any other lunch. It’s pretty shaded overall. Don’t let time of day deter you!!

We did an afternoon trek. According to the time stamp on my photos, it looks like it was 12:30. The only potential problem we had was a thunderstorm was threatening, which would have cancelled the trek. We were geared up, waiting for the all clear. Luckily the storm fell apart and we were able to do it.

I had a GFDF meal and it was good. It’s not so much a meal as it is a heavy snack or light lunch. Here’s a pic of what was in mine. Looks like some shrimp, GF bread, hummus, turkey sandwich meat, fruit, something mushy and yellow/green (potato salad?) and some kind of charcuterie meat. 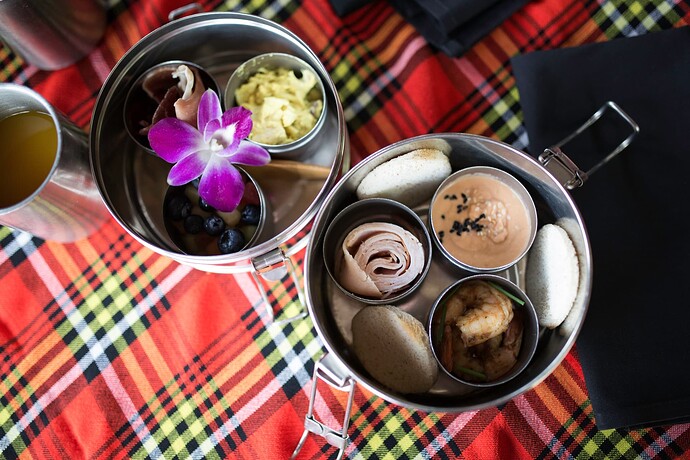 Have you booked it yet??

Not yet. I’m debating if I want to give up that much park time - and Tusker House breakfast which is a fave.

I scheduled the early tour for our trip next month with the thought that the later ones would be a lot warmer.

Yeah, it would have been an easier call if the earliest was available on 8/21. It’s not - and I’m not giving up Rhinos (sold out on 8/21) or changing park days around.

I did WAT in November and it was one of the best experiences I’ve had at WDW, but there is no way I would do it (at any time) June-September. Yes, most of the walking part is well shaded and then you’re in a covered safari truck, but I cannot even imagine doing it in an Orlando summer with heat indices over 100. After the tour I ws chatting with one of the guides and said “I bet it’s a bit different in August”. Her response: “You don’t even want to imagine it”. That was enough for me.

Well I wanted to do it in January, but they didn’t open the tours again until February.

Not sure when I will be back again. My AP expires at the end of September and I have only one unscheduled vacation day left for the calendar year! It is July or nothing!

Absolutely. I have done WAT multiple times and at different times of the day. Loved it every time.

The only potential problem we had was a thunderstorm was threatening, which would have cancelled the trek. We were geared up, waiting for the all clear. Luckily the storm fell apart and we were able to do it.

We had the same problem, but instead of waiting for the all-clear, the storm was far enough off that we went ahead. The guides’ hope was that we’d be across the rope bridge before the storm came, since everything after that has a higher weather-cancelation threshold. Luckily, it worked out for us. The storm broke shortly after we got into the truck. We were soaked from horizontal rain by the time we got to the boma, but we got to do the whole trek.

It’s not so much a meal as it is a heavy snack or light lunch.

Actually, for me, it looked like a small amount of food because the servings were so small, but because there were so many of them, I couldn’t even finish before they started picking the containers up. I was very full and very satisfied.

Regarding the OP’s question about GF meals: I’m not GF, but I had different specialty meal (vegan). I felt taken care of. And even though they of course prefer for dietary requests to be made ahead of time, they still asked for additional requests at the beginning of the trek and were able to honor all of them (there were a couple of shellfish allergies and maybe a GF person, I think, and they all got appropriate meals).

y’all have all said “Only go on the first one”

I’ve never said that. I’ve done the WAT twice and never done the first one.

Do it. It’s awesome.

The food is a trivial part of the experience.

The food is a trivial part of the experience.

THIS, It’s a nice bit of icing on the cake, but I would have thought no less of the experience if there had been no food included.

I intentionally did a later one and used the snack as lunch. It was great.

I am allergic to shellfish and they provided a shellfish free snack. When I went a second time during a girl’s weekend, I again let them know about my allergy and that I loved the chicken salad and if possible, would like more instead of the shellfish. They were happy to accommodate.

I am not a chicken salad person, but loved theirs. It’s more of a curry chicken salad like coronation chicken. I make the recipe at home every now and then https://disneyparks.disney.go.com/blog/2011/02/wild-africa-trek-you-cant-feed-the-animals-but-you-get-to-eat/

It may be a moot point. My gift card is like 34 cents short. LOL.

Afternoon WAT for me. It was still amazing. Animals were active. Eating lunch inside the savana is great. Food didn’t matter. They could have served chicken livers and I would not have cared.
It was March and a little chilly. They offered us blankets.

So professional. Looking forward to taking my husband on the tour in December. 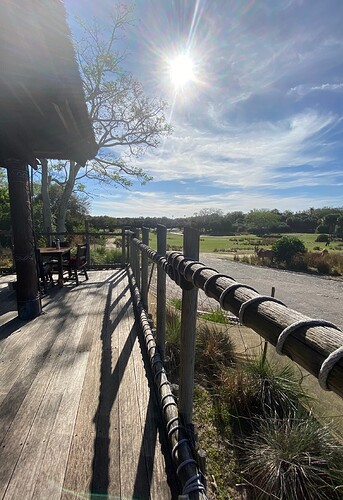 I would call and book it (same number as you call for fireworks cruises). I am sure they would be able to take your gift card and then a credit card to cover the 34 cents.

Definitely holding off for the moment. An opportunity MAY have come up that would change things by a lot for the vacation. Actually there are 2 possibilities of what might happen…or things may stay the same.