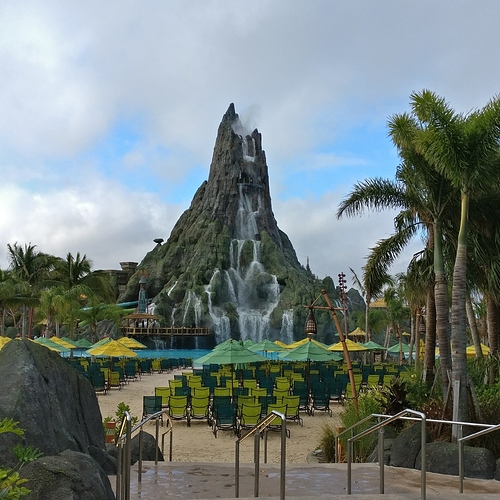 My family just returned from a trip to UOR and hit Volcano Bay while we were there. There has been a lot of controversy and differing opinions about the park, so I thought I’d share our experiences.

We arrived on a Friday at 8:25 for a 9:00 early opening using the shuttle from RPR. We happened to catch the shuttle just as it arrived and were the only people on. After a stop at Sapphire Falls, we were dropped at VB.

We were literally the first people in the park at the 9:00 opening. Even though we had the pick of seats, we wanted to have a central place to keep our things, so we headed to Concierge and rented Preferred Seating and some towels (Allegiant charges for checked bags, so it was cheaper to rent than pack towels). The whole experience was seamless: everyone was incredibly helpful and process was simple.

Here are thoughts on the attractions we experienced:

Krakatau Aqua Coaster: Amazing! Not only my favorite VB attraction, but one of my top 10 in all of UOR. The park was so empty at open that the TM let us ride in the same boat four times in a row.

Ko’okiri Body Plunge: Intense, but over before you really know what’s going on. The platform drops, water hits your face, you rush down for a couple of seconds, and then you hit the pool.

Honu ika Moana: Honu (green) was faster, but ika Moana (blue) was a bit more intense. Both quite fun.

Ohyah & Ohno Drop Slide: I didn’t get to do these as I was replacing a Tapu Tapu I lost in the Fearless River, but our teenage boys thought they were OK. They said the worst part was the depth you plunge into the splash pool at the end.

Punga Racers: So much fun! You go down face-first on a mat, racing against three others. One of my favorites.

Kala Serpentine Slide: The most intense thing I rode in the park. Like Ko’okiri, but seemingly goes on forever. We were not able to do Tai Nui because it was down at the time.

Maku Puihi: Lots of fun. Kind of like Honu, but a bit more intense.

TeAwa Fearless River: We all loved this one. Floating with a life jacket was much more fun than riding in a tube.

Kopiko Wai Winding River: Like your typical lazy river except you go through the Volcano, which is pretty cool.

We had lunch at the Feasting Frog, which we all loved. The chicken tacos were amazing, my oldest son loved the steak tacos, and my wife was very impressed by the loaded nachos. Very reasonably priced, and the food was good enough that we all put it in our top 3 meals of the trip (over places like Leaky Cauldron, Cowfish, Hard Rock Cafe, etc.)

Because the park was so slow, we never had to use the Tapu Tapu to return to a slide: everything was Ride Now until we left around 2:00. We did have some problems using it to open the locker at our seats, but a TM was able to fix it quickly. I also lost mine in the Fearless River, but a TM took my ticket and got me a new one with no hassle. My oldest son’s also stopped working, so we had to go to Concierge to have it reset. Those issues made it a little frustrating, but not terrible.

A couple of observations:

Overall, we were all incredibly impressed. All four of us agreed that a VB is an absolute necessity the next time we return. We were blessed with minimal crowds, so I can imagine how it might be a different experience if the park is packed. If you’re going during the slow season, I would whole-heartedly recommend giving it a go!!

It sounds great! I would definitely like to hear a review from summer months though.

Thanks for a great report! We will be there in 3 weeks and hoping that the weather is nice enough for a day at Volcano Bay. DH and DD7 are huge water park fans and are excited to go.

Thank you for this review! I am eager to hear from someone who goes this summer, as we are planning a possible trip in August and I was going to just skip Volcano Bay, but if we get positive reviews in summer as well, we may have to try it out!

Can Universal not just restrict numbers a bit to give their guests a great experience all year round?

Wonderful information, thank you for this post. My family will be visiting VB April 2, we have reserved seating and I have been doing my homework. I’m hoping all the prep pays off as I am expecting high crowds and long waits. It is spring break so I’m prepared with a plan of attack. Here is hoping for the best and great weather (although I’m not against a little rain since I understand the park tends to clear out when this happens)

I’m curious to hear what things are like for you. I’ve heard that they’ve done some tweaking to the Tapu Tapu system to address the long lines, but I don’t know how much they can do if the crowds are huge. Report back and let us know!

Just returned yesterday from our trip. Our Volcano Bay day worked out beautifully. Since we were staying at an on-site hotel we entered an hour before the official opening. We did have reserved premium seating but it wasn’t necessary as there was plenty of seating; could have saved $$ here but it was like having insurance as it guaranteed entry and a place to call home base. We rode the following in order of: aqua coaster, Moana, Honu, Puihi, Maku, Ohno. After that it was past the official opening and the wait times quickly grew to over 60-90 min for the main rides but we hit the ones we wanted already so it was fine. We ate lunch around 11-11:30 and there were no lines and plenty of seating, we chose to go to Bambu even though we could have had wait service with premium seating. Seemed to be easier for my family and I read that food delivery could take a long time. We then enjoyed the fearless river, lazy river, and wave pool. All and all it was a great day. I would definitely go back if we ever visit Universal in the future.

Thanks for the report, it was good to hear that you had a good time. I know you said that you had early entry for Volcano Bay, how early did you have to get there, and was there a crowd still ahead of you?

We arrived around 9:15, park normal open hour was 10am… There were folks ahead of us but not much since the gate for early entry was already open since 9am. The line moved smooth and no issues with getting tapu tapu (I made sure to set this all up prior to arriving on the universal app). Once in there were so many loungers available and some had nice umbrellas. If you keep moving towards the back of the park there are very nice areas to grab a lounger away from the hussle of the front. Our premium seating was right in front of ohno and ohyah slides, there were nice free loungers right next to us and it was a very nice quiet nook to call home base. If I knew ahead of time I would just have grabbed some of those and saved money. Once we settled into our seats we started to do the slides, all were ride now and had the normal wait for each which was approx. 10-15 min. After the 5th slide we rode the normal park hours started and lines quickly grew to over 60-90 min. The early entry hour was crucial to truely experience the headliners.

Another VB review:
We went this past Friday 4/6 and also had a fabulous time. We took the 8:15 bus from Hard Rock and were some of the first into the park when it opened at 9. Early entry was fantastic for getting quite a few rides in before the crazy crowds arrived. And arrive they did, park was as capacity in the early afternoon and waits were in the 90-150 minute range for most rides. Tapu Tapu worked great. We did not pay for premium seating as it was $80 due to peak pricing. I am very glad we didn’t as there are tons and tons of free chairs with umbrellas all over the property. We ended up never even sitting in them as we stayed busy the entire 5.5 hours we were there. We also ate around 11:30am and lines were minimal. By noon they started to get really long. We ate at Kohola Reef and it was delicious. Best quick service meal in any theme park for us. Our favorite ride was the aqua coaster, followed by Honu, that was a rush! The fearless river was so much fun as well. We all had a wonderful time, the park is beautiful and very clean.

Dang it! I was bound and determined to not visit Volcano Bay for our trip in August, assuming that I wouldn’t really miss anything. All of these good reviews are throwing a monkey wrench into my plans!

I don’t even like waterparks, I had planned on letting the kids (teens) ride the rides and I would hang out in the shade reading, then join them in the lazy river. I never had time for that, the rides were so fun!

Okay, it was terrible! Do not waste your time or money!
Better?