I don’t have great pictures but I thought I would write a brief report of our Volcano Bay visit last Saturday. We had originally planned on visiting on Sunday the 22nd. I had booked a Cabana for Sunday but on Tuesday the weather forecast changed and Sunday was suddenly showing a 80% chance of all day rain with lightening all day. I was shocked when I called and they were able to change my cabana to Saturday but the price increased by $50. 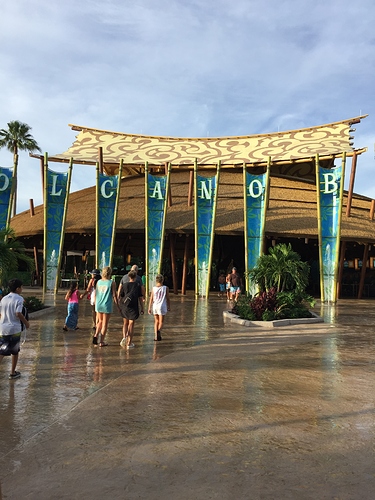 F We had to go to two different concierge huts before we found the one that would escort us to our cabana. There were not any cabanas or preferred seats available that day. You needed to book ahead of time. They were selling express passes for $35 a piece. I am glad I did not get one since we did not need them.

We were walked to our cabana. 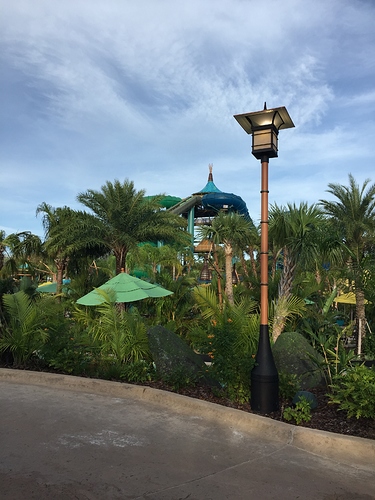 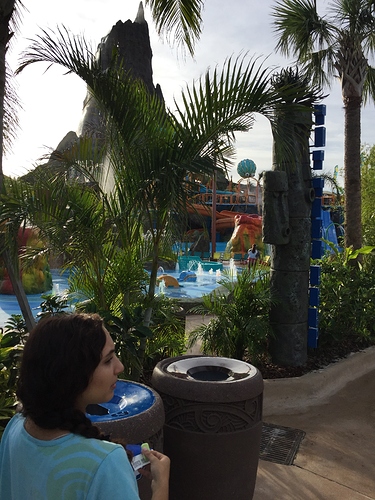 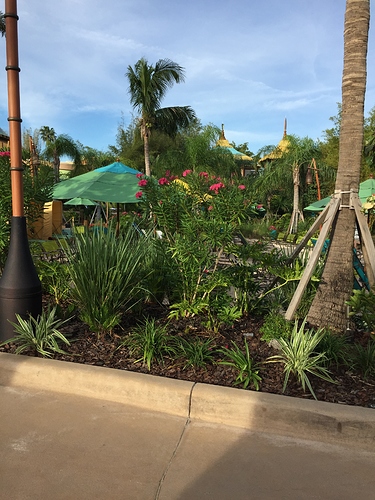 Our cabana was located by a “kiddie area”. It was nice since there were only two cabanas here. It is also a great area if you are looking for a chair. 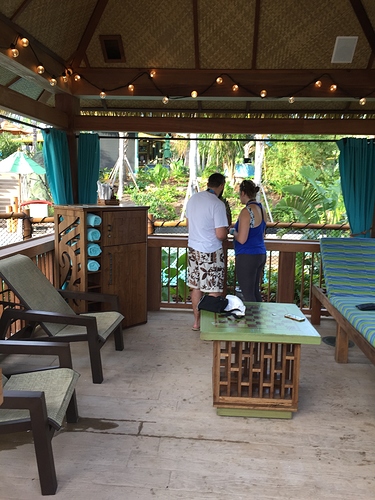 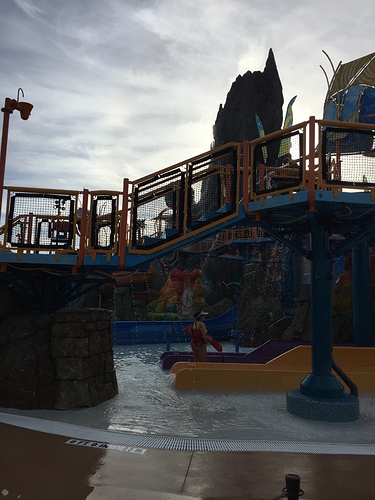 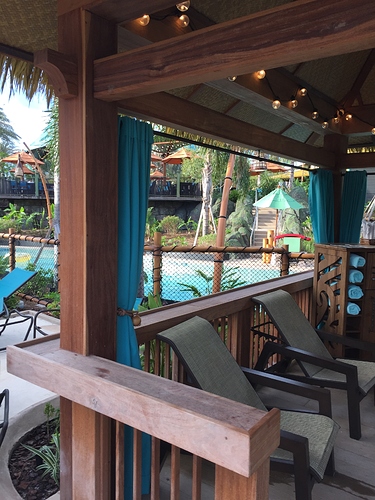 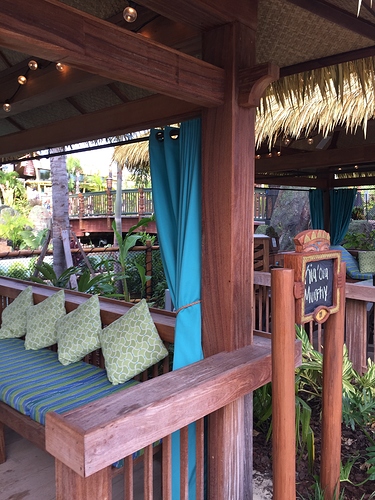 For the first 90 minutes there was little or no wait for any attraction. The very first attraction we did was Ko’okiri Body Plunge. I think we were happy we started with that. Walking to the top of the volcano is a lot of stairs! We ended up doing at least one side of every single attraction in about six hours.

I had read a lot about cabanas before I went and I have to say I was so happy I had one. I know at times they can be expensive but they hold 6 people and my weekend they were $249on Sunday and $299 on Saturday. Initial reports said that people tried to come into cabanas but that never happens with us. There was a recent blog post on Touring Plans regarding the slow service. We ordered food and it was brought right away. The two drinks we ordered came about 30 minutes after we finished eating. They sent about 5 different people to check on us during the day to make sure everything was going well. 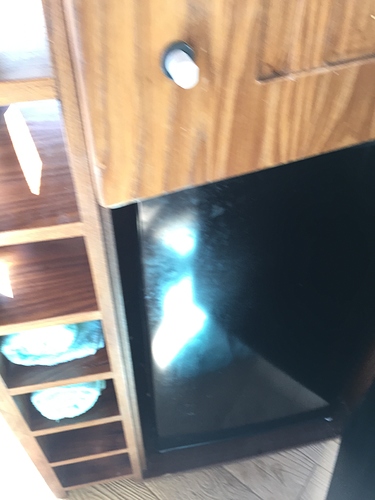 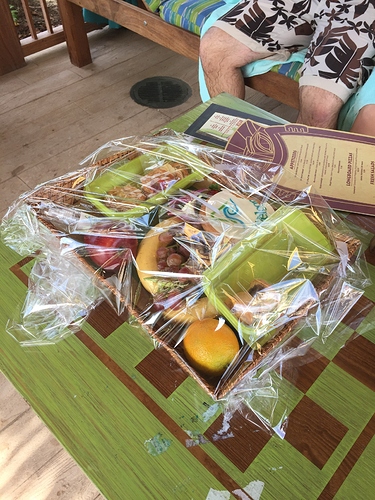 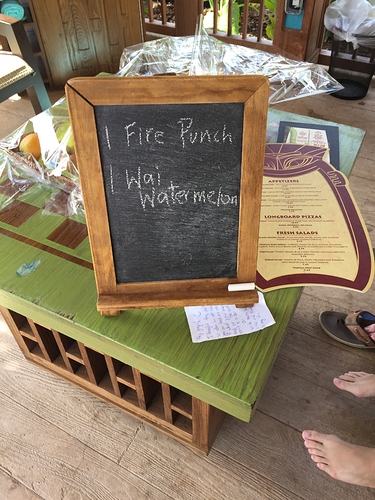 The top picture shows the locker (you lock and unlock it by tapping your Tapu to it) on top and a refrigerator on the bottom.

I took it after we broke into it but they stock the refrigerator with water and give you a large tray of pastries/fruit.

Finally, our server left us a blackboard to leave notes to her regarding food we wanted and time we wanted it. That was the drink order!

a blackboard to leave notes to her regarding food we wanted and time we wanted it.

That is a great idea. You can go and come back for the food.

I said it before, I will say it again, I was so glad I booked a cabana. Call and book preferre seating or cabanas early in the month.

I posted on another thread but I will note it here: the Fearless River was pleasant in the late morning. It was scary in the afternoon. I would never go near it again in the afternoon. People were fighting for tubes and I am shocked no one was seriously hurt.

For us Volcano Bay may be a one time a trip visit but we will return.

Thanks for sharing! Assuming the weather cooperates, we’re considering going during our trip in mid-January. Sounds like they’ve either ironed out some of the early headaches or lower crowds helps tremendously.

They average 2.5 stars out of 5 for customer satisfaction on Trip Advisor. Countless 1 out of 5 reviews every week of days ruined in Orlando

I paid for tickets in July that included access to Volcano Bay. Our family were so excited about what it promised. I read the reviews and we changed our plans and didn’t visit.

There should be huge apologies going out to guests

But nothing I can see?

It should have the best reviews for a water park in Orlando. Instead it has the worst by far!!

The Fearless River was the only area that I believe has an issue right now but that is a real problem.

Let me tell a story about something else that happened during my trip. We were in line for Honu. There was a father, mother and son behind us. I know this is Universal and people expect that you never have to wait. The line was about 10 minutes long- maybe closer to 15. The father complained the whole time about the line. In the end what he was complaining about is that they have left their daughter (too small to ride) alone in the kiddie area. Yes- alone in a water park while they went on a water slide.

From what I’ve read from others all that’s happening is you are clocking in to be told to return to a ride to join a queue that itself could still take 15 to 45 minutes!!

But appears to be abysmal in reality

In recent reviews people saying that when told to go to their rides they still faced 40 minute queues.

And some people having waited 2hrs30 for a ride getting the buzz only to find out the ride is closed when they get there!

Bring back wet and wild!

Even without fastpass you never queued long to get on the rides there!

And with fastpass (which was cheap) you walked on every ride