So, how would Hagrid’s compare to RnRC? I can do that just fine. It is the drops that get me. And maybe more so the anticipation of them.

I can’t explain without too many spoilers… I’d say RnR is more intense = IMHO.

If you want a bit more info, I’ll do a spoiler tag below. However, I advise against it as it’s such a great ride and the “surprises” really make it special. I would advise not reading it!

Basically… It has a world record SEVEN launches and goes about as fast at RnR. (RnR = 57 mph / Hagrid’s = 50) … It has multiple tunnels and goes backwards…
Those are just a few of the technical specifications… I’m not going to spoiler the rest!

Thanks. I will probably forget by the time we get there anyway. If there are no big drops to anticipate, I should be okay. Even Pirates can be a bit iffy for me. Definitely no Splash Mtn. Love FJ.

Ummmmm… maybe you should look at this then…

There is a “Surprise” backwards drop that isn’t too big, but it does catch you off guard. Very similar to the unexpected “drop” at Pirates. So… if Pirates is iffy you may need to reconsider. (However, it’s probably the best coaster anywhere on the planet - especially if you love Harry Potter)

Well, I might be good the first time - I won’t know when to expect it!

Just FYI, Storm Force is also closed during COVID. They use it as the spillover line for Hulk.

Since I was a kid, I have had a major fear of falling. I don’t do RnRC, Space, Splash, Everest as I do not do big drops, corkscrews, etc. Embarrassed to admit but years ago had a full blown panic/anxiety attack on splash mountain to where I was in the boat, the boats all stopped, then suddenly I found myself standing plastering myself against the wall of the walkway (don’t remember doing that). The cast member was so very kind and could see this was not me being a jerk, but full panic mode. Was so embarrassed and could not stop apologizing and she was just so great with making me feel that it was ok, it has happened before, no harm done. Since then, I avoid those types of rides.

There is a “Surprise” backwards drop that isn’t too big, but it does catch you off guard. Very similar to the unexpected “drop” at Pirates. So… if Pirates is iffy you may need to reconsider. (However, it’s probably the best coaster anywhere on the planet - especially if you love Harry Potter)

The UOR QS is worthwhile as long as you don’t buy cheap beverages with your Bev/Snack Credit. This is because starting last year the Beverage and Snack credits are in one bucket. So, with a meal plan you can get two snacks ($7 each) and the entree only has to cost $12 to break even. If you’ve never been before you will want to try every Butterbeer version and those are expensive snacks. You also don’t need to prebuy the plans. You can buy a one-person/one-day plan and then immediately use it. If you like sodas buy the plan with the Freestyle cup on the first day. Also on the entrees, always buy the Combo version, and if you aren’t a big eater bring ziplocs to eat your leftovers later.

ETA: I didn’t mean to reply to that. Although it is the best coaster on the planet.

Although it is the best coaster on the planet.

This is somewhat laughable to me.

Don’t get me wrong, Hagrid’s is a great coaster. Definitely one of the best in Orlando, possibly in Florida. (Although SeaWorld’s Mako is rated more highly than it on other best lists…I haven’t been on it to attest to that.) But there are TONS of coasters way better than Hagrid’s.

And, when you look up rankings of top coasters, Hagrid’s doesn’t even crack the top 10 or 20, depending the list you look at.

The once exception is if you look at Theme Park Insider. But their ranking system is incredibly biased, and is more an account of how many people ride it than actually think it is best. This places a strong bias towards parks that are open year-round and draw a crowd from outside the region, such as Disney and Universal. Don’t believe me? Look at number five on their list. Expedition Everest. There is no way EE is in the top 5, top 10, or top 20 best coasters in the world. It is my favorite Disney coaster, and I think it is world-class. But it just demonstrates how Theme Park Insider is NOT a good source for ranking coasters. It is in the top five because so many people go to Disney! The Mummy at UOR is number 11 on that list! Which is hogwash. (Again, I love the Mummy…but it ain’t even close to on par with the best coasters in the world.)

Having said all that. Hagrid’s is a fabulous coaster, for sure.

If you don’t do Space then you likely won’t want to do any coaster at Universal, they all have drops. Even Hagrid has a segment with a drop like Tower of Terror (just way shorter, 13’). Mummy, Gringotts, Hulk, etc all have drops.

Maybe a little faster, but not much. Like the tea cups, how much you spin your car really determines the intensity level.

Oh wow! I’ve always considered those flume drops at Universal so much easier than Splash.

Probably because Splash ends up in a tunnel so it feels much faster; both UOR rides end in wide open spaces - and in JP you’re in a larger boat (similar to POC), so although higher, it feels less intense. But both - especially Rip Stop will get you considerably wetter than Splash…

And, when you look up rankings of top coasters, Hagrid’s doesn’t even crack the top 10 or 20, depending the list you look at.

“Best” is always such a subjective term. Most of the rankings you see on line are done by hard core coaster enthusiasts who base their opinions on height, speed, inversions, and air time - NOT theming. These coasters are built for the shear adrenaline rush (OBTW, I LOVE them; you can’t build one too fast or high or have too many inversions for me). But Disney builds rides that focus on theming and storytelling that have a moderate thrill level designed so that a wide range of ages can ride together as a family. If your “best” is based on theming and storytelling, then Disney (taking all of the parks into consideration) would probably dominate the “top 10” list. Disney will never build a Hulk, or a Kracken, or a Montu, because it’s not part of the company’s “family focused” philosophy. Any one of the Disney coasters, stripped of their theming would be very unimpressive (except maybe EE) as pure “coasters” 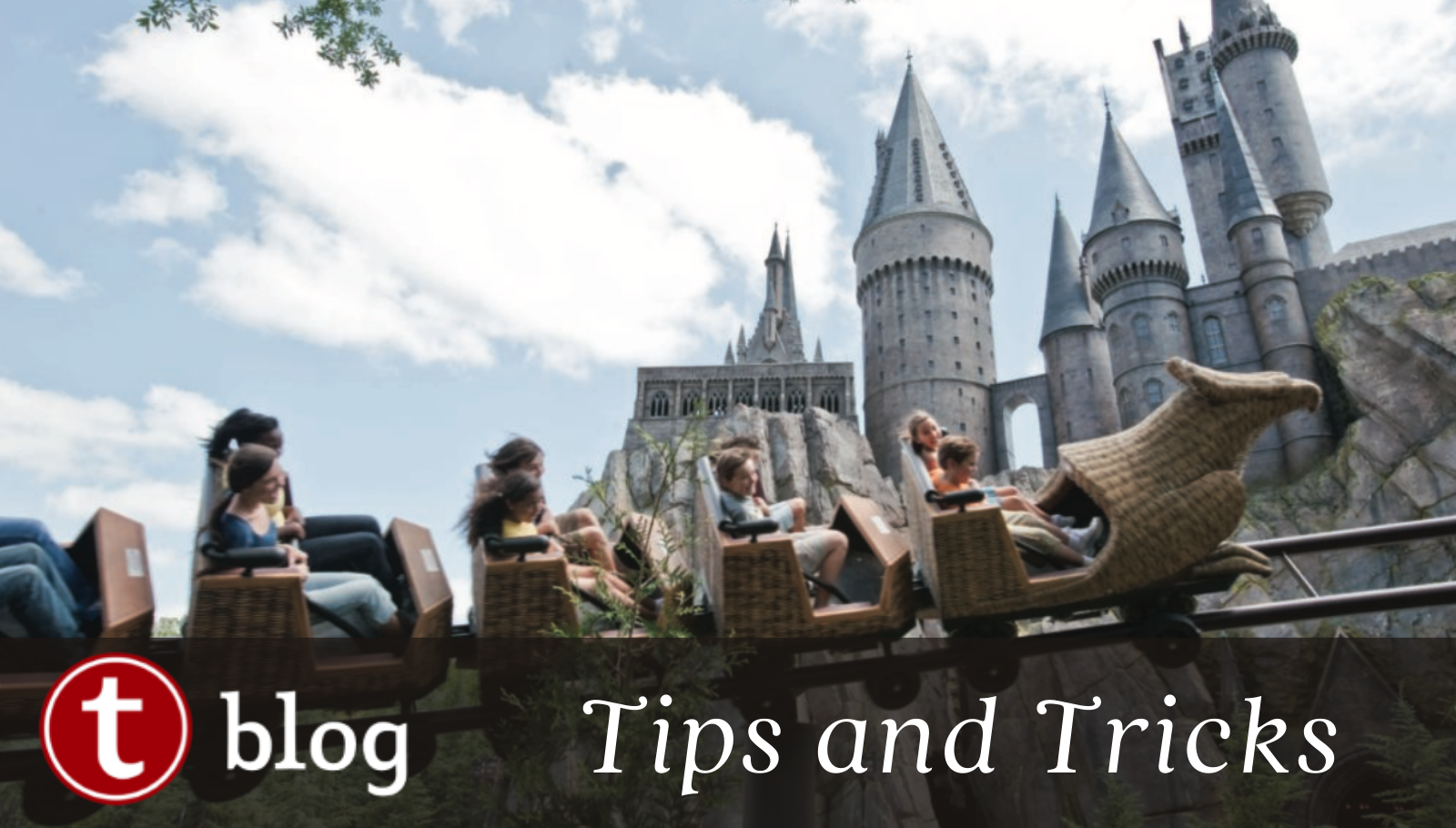 Can I still walk through the queues (especially the HP attractions), then duck out right before boarding the attraction?

I asked the same question recently and was told yes. You will have to walk the entire queue - you can’t skip straight to the castle and do a tour like you used to be able to.

I think if you can handle the Disney coasters. Mummy, Gringotts and Hagrids are doable; honestly Forbidden Journey is rougher imho. I’d just avoid Hulk and RRR and if it’s open Velicoaster. So I’d concur. Go. Go just for Diagon Alley alone and it’s worth it.

Disagree. The drop in Hagrids is a fabulous surprise; totally got me the first time and theming is best ever for any coaster I’ve ever done. I’ve bungeed off the third highest jump in the world, skydived, and ran off a cliff in Hong Kong to paraglide. I like thrills but that’s not all there is to a coaster. So I’d say both Mummy and Hagrids are on that list. I’ve done all the Cedar Point ones and Magic Mountain and none of them are as memorable Tron is also on my all time list.

Hagrid’s is great fun. Love it. But it doesn’t hold a candle to Steal Vengeance nor Millennium Force…in my opinion. Not even close.