Just checked WDW reservation calendar and it’s going to be full there too. Lots of ppl taking a holiday week

It’s the week between Christmas and NYE, it’s always a mad house.

I guess i was hoping for some kind of restraint from people during all this mess!

Reminds me of the @mousematt “Covid Soup” airport photo from the spring. This is Covid Soup Part Deux.

They’ve only been open for 1 hour today:

That’s crazy! I wonder if we would see these messages at WDW if they didn’t have the park reservation system?

Does anyone know what percentage of pre-COVID capacity they are currently functioning at? I would be very curious to know this.

There’s still a line of cars all the way down the road trying to get in at 8:15am… This is the big downside to no reservation system.

Here’s the queue for Spider-Man - 165 minute wait at 10 minutes before “official” opening. (They had early entry at 7am) 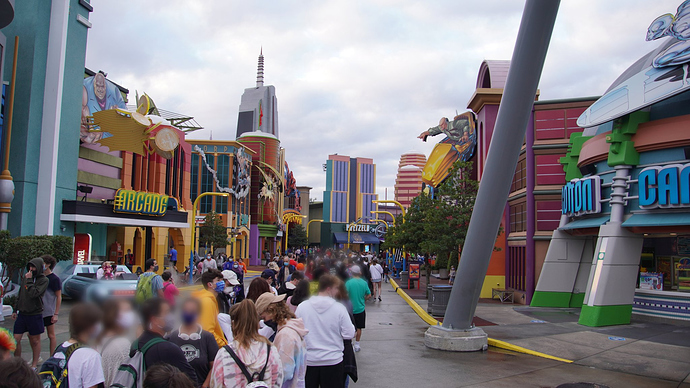 It’s one of the reasons I like the park reservation system when they are running at such reduced capacity. Len keeps trashing it on the podcast, but I’d hate to spend money and valuable vacation days only to get locked out of the park due to capacity limits! I like knowing I’ve got a spot. (I’ve not actually been to WDW since reopen, but I’ve planned several trips

Hope your dreams/plans pan out soon! I think if you are staying on property at US that you are counted and have a park spot? Maybe someone can confirm that b/c, I like you, would be angry to travel $$$ and not get in.

Yes, onsite guests get guaranteed entry to the park.

I don’t know why anyone would want to go now. But I mentioned that to DH and he said, “Not everyone is as crowd-adverse as you”

I’m not a fan of the reservation system. At Disney you can be staying onsite and STILL not get in unless you plan your trip early enough to get the reservation. Also, at Universal, once you are in, if your ticket allows you to go to the other park, you can.

You make good points. Thanks for confirming my thoughts on park entry as a resort guest. I do think that US has treated locals better than DW too. We bought an awesome AP from US this summer (when we moved here) but haven’t activated them yet. My list of grievances w/ DW against locals continues to grow.

I love that ride, but no way would I wait 165 minutes for it (or even half that).

Why are the lines so long if capacity is limited to 35%?

Why are the lines so long if capacity is limited to 35%?

But the ride capacity is down too. When we were there in August we saw them cleaning the cars and then sending them around empty. Then you have the empty seats because you don’t sit people not from the same group together.

One day we were there the crowd level went from an expected 2 to an 8. (I guess other people saw the 2, like us, and went whoo hoo let’s go) It felt like an 8 in every way. Line times, crowds on the walkways. It felt like a 15 in the site-down Q.S. restaurants.

On the sending cars around empty, we went to the local Six Flags on a hot day around July4th when they opened. Getting off one ride DH said, “My back is wet” I said, “Don’t think about it”. Later we saw them liberally spray the ride with cleaning stuff and I said, “I think that is why you were wet”

Also remember social distancing in the lines, so a full queue in 2019 now spills all the way to Port of Entry.