I’ve never been to Epcot. It’s so big…Question: How many entrances/paths in are there to Future World West and East? On the map, rides like the Seas (on the east side) and Mission Orange (on the west) look easy to access from park entrance the way the crow flies, but not via the walking paths.

We won’t get there till 1pm or so on either day; and I’m trying to get my 3 FP’s in on both days before the 3.31 SDFP drop to have a fighting chance at SD Soarin FP, so I have to knock out all FPs quickly upon entry.

With a ride order below, how far out of the way is Mission Orange if the logic is to go on the way to FEA?
Arrive Main Entrance
Spaceship Earth (FP)
Mission Orange (FP) -??, doesn’t look out of the way on map, but…
FEA (Tier 1 FP) - goal: off ride by 3.30
Gran Fiesta Tour
Single Rider Test Track
Then head over to Figment and spend the rest of the time in Future World East. Other than Norway (FEA) and Mexico at the start, no other countries.

Conversely, does this mean that Turtle Talk with Crush and the Seas are buried way down at the bottom of Future World East, so if you do those last, you will have a long walk back up through the World and then back out of the park?

The way the crow flies, it would seem easy on Day 2, to come into the park, do Spaceship Earth again (just to knock out a FP), the Seas (to knock out a FP), and then hoof it up to France (planning on Ratat to be open when we are there, and thus will have to use as our Tier 1 for that day). Am I right to assume that the Seas would be a silly detour on way to France? I didn’t want to wait in a 30 minute stand by queue the day before, so thought I could use as my 3rd FP on Day 2. We’d spend the rest of the afternoon in World Showcase on the east side (going counter clockwise, not going farther than U.S. pavillion and then back down).

On the map, rides like the Seas (on the east side) and Mission Orange (on the west) look easy to access from park entrance the way the crow flies, but not via the walking paths.

You have to walk to the central area where the starbucks is, then turn left or right. It doesn’t take more than 5 minutes to walk there.

how far out of the way is Mission Orange if the logic is to go on the way to FEA?

Not far at all. When leaving MS, turn left past TT, then take the path around the Odyssey. It won’t take more than 10 minutes.

Am I right to assume that the Seas would be a silly detour on way to France?

Not really out of the way.

When are you planning to go?

Ratatouille may be open by Easter next year, April is a reasonable estimate for now, although recently things have been delayed at DHS, with the runaway train ride delayed by 6 months after what was an achievable target date. That though is partly linked to problems with the second Star Wars ride.

And Spaceship Earth will likely be closed by the end of this year, certainly early 2020.

So you will probably only have one of those open. And Rat will almost certainly be a tier 1 FP.

I found Epcot to be the easiest park to navigate. There’s great signage and really only one way to go.

Easy has Seas, Land and Imagination pavilion which are very close to each other. West has TT and MS which are close. Both dump out on either side of WS. Only one way to go in WS.

I’m curious to see how they tier when Ray and Galaxy open. That would be a lot of Tier 1.

With 2. Days (even if they start at 1pm) my guess is you will be fine! We crisscrossed the park multiple times because Soarin fastpasses kept popping up and we loved that ride! We were only there 9-3 and had a wonderful time! The countries make for a beautiful walk even if you don’t have time to explore everything. Another trip (maybe solo) I would explore to my hearts content but this was quick and focused mainly on rides and food!

Thank you all for the advice. Interesting on LWTL. I am testing my TP on CL 10 days b/c it’s almost a given that our trip will be during a peak timeframe (due to school and work). TP has us waiting 37 min for seas and not at all for LWTL, but I trust feedback from this forum way more. Good to know about 7pm seas closure.

Didn’t know spaceship earth was closing - bummer if only b/c there seem to be so few tier 2 rides that are appealing. Maybe Awesome Planet will be Tier 2? I am torn b/c Soarin (at DLR) was my older son’s favorite ride, who will be 11.5 , but I’ll have a 6 yr old as well who loves frozen, and I understand FEA is the harder FP to get, and I’m assuming RAT will be too when it opens, so that 3.31 drop will have a lot riding on it both days. TP says Soarin waits will be 70 minutes.

My kiddos generally like short edu movies, so planning a TP on Day 2 in WS that allows for that, as well as time to catch some of the other acts: Voices of Liberty, Servant etc.

Any thoughts on whether O Canada should make the cut on day 2? Supposed to be funnier than others?

I would FPP FEA. Soarin waits aren’t too bad if you RD and you can sometimes get a same day. Also, with FEA location better to do that later. Just book a tier 2 even if you don’t use it. Seas with Nemo a good choice as well. Usually not long lines but kids will like it.

Also, on many ways if RAT isn’t open by then it solves my Soarin dilemma, so that’s OK. We will be there after April next year - either Oct or over Thanksgiving (note: we’ve done Thanksgiving before so know what we are in for).

I know I’m planning way far in advance but for me it’s helpful to give my husband the arc of our schedule before booking to justify the 8 nights (his idea of Disney is 4 days max) and I want to see all 4 parks and won’t do commando RD-close! Plus, I’ll have to pay in full this November or December for our lodging since we want to rent DVC points. We spend months building excitement with our kiddos, but I’ve decided 9 day non park hopper tickets are the most cost effective for us (only $40 total for all of us than 7 day) so we can ‘surprise’ them on our arrival day with a walk over to MK on the late afternoon we arrive.

Our EP days are falling after late night’s at parks, so it’s the only park where I don’t have at least one RD day. I may regret it if we have to wait 70 minutes for Soarin!!!

TP has us waiting 37 min for seas and not at all for LWTL,

That’s just my personal experience with LWTL and seas. seas is like the Ariel ride at MK with the continuous conveyor belt loading so it loads quickly. LWTL lines can be short sometimes but recently I’ve seen it long more often than short.

O Canada should make the cut on day 2? Supposed to be funnier than others?

It’s a one and done situation for me. Worth seeing if you have the time though. It’s funny if you like Martin Short (he narrates).

It makes me dizzy to be honest. I can see why having seats wouldn’t work with the whole 360 thing, but I was holding onto the rail and trying to fix my gaze in one place by half way through.

I agree that it is like Ariel’s ride (you ride in a clam shell), but it is also the same as Nemo (subs) at DLR (same videos when you are in the tunnel on Nemo). Cute, but not enough to warrant a long wait. 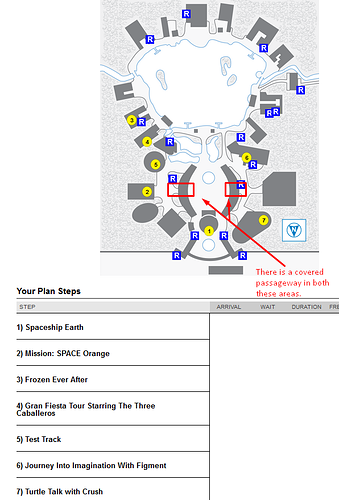 Here is a Google maps version. Note that it’s upside down to the TP ones: 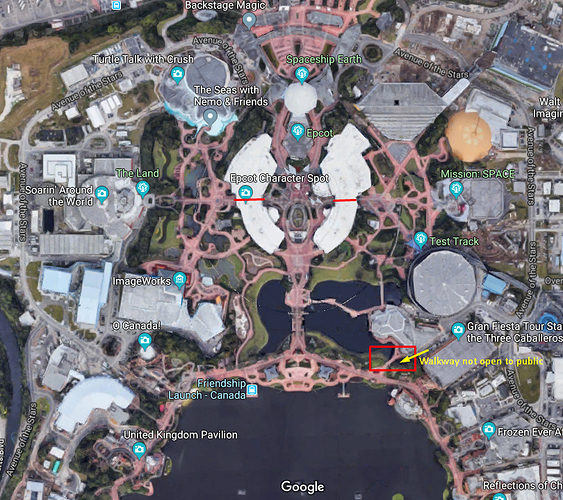 You could always split the fast passes into 2 groups so one group picks FEA and one group picks soarin or test track. If you’re ok not doing everything together. Our day was a CL 10 and it was pretty easy to get multiple FP for Soarin.

This is so great! And, the map showing the covered walkways was perfect, as I couldn’t visualize how you duck into those lands. So helpful. And glad to know a CL10 has Soarin SDFP. My oldest will be counting on it. And, I’ll also try for a TT FP in last hour before close on our first day to roll the anytime FP dice.

Recently visited EPCOT after an 8 year absence…All I can say is wear your most comfortable shoes and be prepared to WALK…My DD19 and I walked 11.4 miles from noon to 10pm with rest time for lunch and dinner. EPCOT just seems like the park you most likely backtrack in. FW East and West look close on a map but they are far apart especially in the rain or high heat and humidity. I was fine until the last evening walk from La Hacienda de San Angel restaurant in the Mexico Pavilion to the Beach Club for Uber pick up. The park was almost deserted but I couldn’t enjoy it because I developed a large blister on the ball of my left foot. Thank God for blister healer bandages because I still had 3 more days in the parks. Wear comfortable shoes and enjoy!