Channel 5 is running a series called Dale Winton’s Florida Fly Drive. The first episode is available on catch-up and features a 15 minute segment on WDW. (It’s at the beginning of the programme, so you don’t have to watch the whole thing!)

I’m not a huge fan of him or his commentary, but it’s getting me even more excited about my trip seeing video of the place — and it’s fun to identify where he is.

One thing that’s slightly scaring me is seeing how busy it is when he’s there. I went late last August when the crowds were actually pretty low. My upcoming trip is late June — I think I may be in for a shock!

I saw the show, I only watched it because WDW was going to be shown! The rest of it was pretty meh. It always excites me to see Disney on the TV here

So…your going back! I knew you would

once it takes hold…

Oh I wanted to watch it and forgot - thanks for the reminder! I love seeing places I know on TV, especially WDW!

This may sound like a stupid question as I am from the US, but why come here when there is a Disney World in Paris and I believe Japan. Isn’t Paris closer to the UK? Seems like a long way to come from UK and Au. Just curious as I have never been to Europe.

WDW is waaaaaaay better. Bigger, better themed (although the castle in Paris is amazing, and you get inside it - so that part is the best anywhere), more parks Plus the vast majority of UKers who come over do Universal too, plus everything else.

For me, Florida is an incredible place. You have KSC. And the Keys. And the West Coast.

DLP is expensive for what you get. To stay onsite you have to get park tickets for all days (not nights). That pushes the price up.

Per day, WDW is way cheaper, thanks to all the inducements for us to come over. Not including flights of course. Vast majority stay offsite, 2 or 3 weeks for what 5 days costs onsite.

DLP is a 2 or 3 day trip, whereas if I’m going to Paris for that time I’m doing Paris, not a Disney park.

Did I mention the weather?

DLP is a weekend break. Orlando is a vacation.

Thanks! Was always curious about that. Never said anything before because I didn’t want to offend anyone. Relatively new out here and I stepped in it once before. As an American we are only too happy to have you all come to our country. Always loved people from the UK that we meet and wished to get there some day but I am not as young as I used to be so I don’t think that will happen. Would love to see Au as well. I should say my wife has been to Europe at an early age but I have never been there.

Plus Disney have only recently got ful control of DLP, it was owned in partnership with a French company I believe and this held back some of the advancements/theming. Paris was my first park and it will always have a special place in my heart but it is nowhere close to the size/experience/general amazingness of the world

This may sound like a stupid question as I am from the US, but why come here when there is a Disney World in Paris and I believe Japan. Isn’t Paris closer to the UK?

@Nickysyme nailed it when she said “DLP is a weekend break. [WDW] is a vacation.” (if she’ll forgive my edit).

But I’m going to disagree on one thing. I think the castle at DLP (which in French is Le Château de la Belle au Bois Dormant, which I absolutely love) is — compared with Cinderella’s Castle — embarrassing. If you’ve seen the WDW castle, the DLP castle is just a let down. 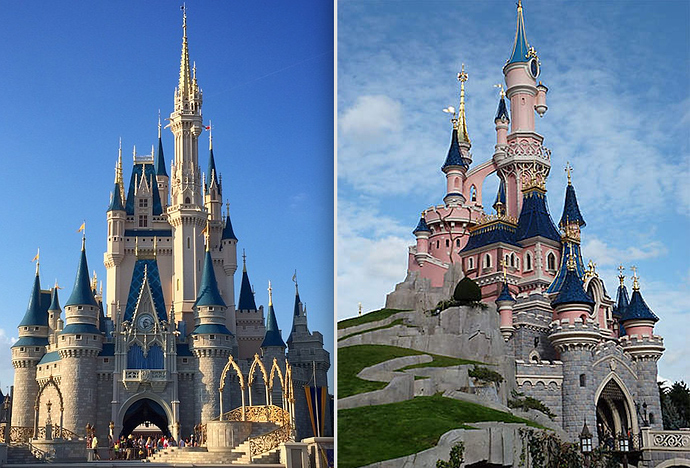 But, yeah, WDW has four enormous parks, whereas DLP has two — no AK, no Epcot in Paris.

WDW has dozens of restaurants, some of them very good. People go crazy booking ADRs, months in advance. Not so much at DLP. WDW has many different hotels, DLP only a handful.

Orlando has WDW and Universal (well, and the other ones, too). Paris has just Disneyland. (Well, and Paris, but that’s a whole other conversation. Paris is awesome. Though DLP isn’t exactly in Paris: it’s an hour’s train ride away.)

And although Orlando is hot and humid that’s also one of its attractions. As a Brit, I’m very aware that I’m not in England when I’m in Florida. The grass is different. There are palm trees. There are little geckos running around. The heat and humidity are unlike anything we get at home. Even the storms are better! The whole thing is exciting!

Sure, I’ve been to DLP more times than WDW because it is a lot closer. You can even take a train direct (non-stop) from London to DLP in about two and a half hours —DLP has its own train station.

But it’s just not the same.

The actual castle itself, yes I’ll give you! But the area around it is soooo much better. And like I say you get to go in it. Plus the maze and storybook canal.

Good call on the awful food. It does have the Wild West show though, that’s fun.

And the train… yeah, good if you’re near London. If not, add a hotel in London before and after and there’s another £400. Or you .pay for a wasted night in Paris to take a late train and if onsite you still need a ticket for arrival day. Rip off rules right there. I can’t get down to London before 11 and that’s getting up at 4 to get the train at 6.

Way cheaper to stay in Paris - but who does that and goes to DLP? One of the most beautiful cities in the world versus a theme park. No contest. Would rather go visit Paris again instead of Disney. And I’ve never been to the studios either, still would spend my money on Paris itself.

Thanks for the reply. Believe it or not, for us it is quite a change in weather and scenery. In the state of North Dakota where I and my wife live, it is very flat as it is a Plains state. We have ash and pine trees but no Palm trees. The summers are similar to Florida at times as it can get hot and very humid. We have four different seasons, Spring, Summer, Fall, and Winter. Each is very different from the other. In the Winter it gets very cold and sometimes it snows a lot, other times not so much. Winter temps can reach -35 degrees F. Because we are mostly flat be get a lot of wind. This sets up a wind chill factor and can turn our temps to -60 in how it feels. We don’t get hurricanes as the far south does but we do get tornado’s and floods from winter snows causing the rivers to overflow. Sounds like a great place to live and I have to ask myself just why we do it. The short answer is we have all our lives and believe it or not there is a difference in how people act from region to region. So for us WDW is the answer. We will be there March the first to the 14th. Thaw out time if you will.

Way cheaper to stay in Paris - but who does that and goes to DLP? One of the most beautiful cities in the world versus a theme park. No contest. Would rather go visit Paris again instead of Disney. And I’ve never been to the studios either, still would spend my money on Paris itself.

Ditto that. Wasted a day of a Paris vacation going to DLP. Never again - far too much to see and do in the City of Lights.

In one word…atmosphere! I’ve been to DLP and found the whole atmosphere to be a bit meh…come on guys it’s Disney!
You guys (Americans) make Disney special (not a suck up…promise!)