Well, today was it. The last day of vacation. We spent the day packing, doing laundry (I love not bringing tons of dirty laundry home), DH did a little bit of work, and I took the girls swimming. I didn’t swim…it was too cold for me right at 70, but the girls had a blast. Around 3:00 some friends who live about an hour away came to visit for the evening. They have all girls (and surprised us when they showed up with four girls instead of three…obviously we’re not in touch super well so that was surprising!) and our girls love getting together with other families with all girls.

We took all the girls (7 of them!) to the resort’s playground and they played and ran around for an hour or so while we adults visited. Then we headed back to the resort where we pulled out all the random food we had and they helped us devour most of it. That was such a relief to me…I hate throwing away food. My in-laws had not eaten a single meal with us that I had planned on so I had extra food from them not eating. And then, since this family is only an hour away, they took all of the food that was opened but not used or that would likely spoil or be damaged on the drive (anything refrigerated, half-eaten bags of chips, condiments, etc.). The first set of in-laws must have thought we were going to be eating in a lot more than we did because they bought all sorts of stuff, ha. I was so glad to give it to someone and not have to throw everything away.

They left around 7:30 or 8:00 and we got the girls ready for bed and continued to pack but honestly we were tired and we’re just tired of packing, so we left a lot of it for the morning and went to bed at a decent hour.

We managed to check out of the resort around 8:45. It was a good bit later than we had hoped for but thankfully we didn’t really have any big cities we were trying to avoid at rush hour or anything like that. So, we hit the road and managed to make it until lunch time without stopping! Major accomplishment for DH, who, if you’ve read the rest of this report, was responsible for at least half of our bathroom stops. We grabbed some Chic-fil-a for lunch, filled the car up, and continued on our way. I think we stopped maybe two other times for bathroom breaks and we stopped around 5 pm for dinner at a Cracker Barrel. We only had an hour left of the drive by that point but the girls were over being in the car and needed a break. I think we arrived at my in-laws’ at around 7 pm. All in all, the travel day was fine. My girls did well in the car, all things considered. I think we’ve driven about 5,000 miles in 3 months, so they’re sick of the car and I can’t blame them for just being done with it!

4b) (I don’t like the formatting here but can’t change it. This is not a new topic, ha.) I want to challenge the “eat breakfast for your TS meals” thought if you are on a budget. Eating a bowl of cereal for breakfast and eating a TS meal (buffet, character breakfast, etc.) for lunch at around noon, or eating an early dinner, is a better idea for saving money. Lunch or dinner will cost around $10 per person extra, but you will be full for most of the day, or can get away with a lighter lunch and actually be hungry at dinnertime. So yes, breakfast is cheaper. But you’ll spend less over the course of the day if you eat your TS meals at lunchtime or if you eat an early dinner (and have a light lunch).

And just for fun. We got back family photos last night. 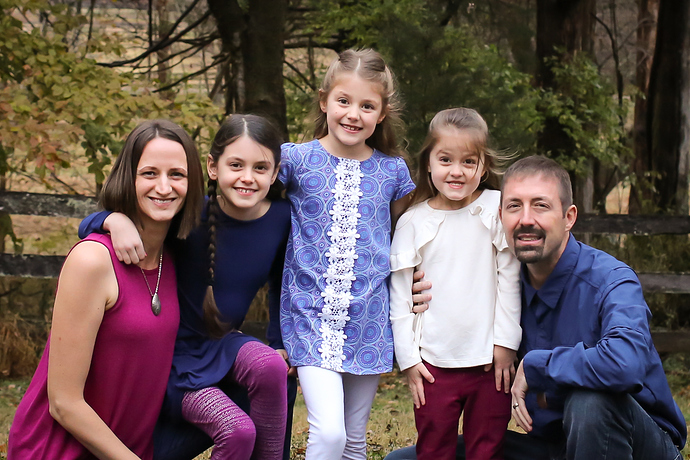 Loved reading about your trip. Sounds lovely and you have a beautiful family. Thanks for taking us along.

Thanks for sharing your trip report with us. I’ve enjoyed following along. I agree about all the extras. It’s easy to get sucked into it all and feel like you are missing out otherwise. Plus, the bigger the family the greater the expense (family of 6 here). I’m temped to try TRex for that dessert now haha! Great photos and beautiful family!

Yes, especially as a first-timer. I can see the appeal of them for smaller families, people who go frequently, or people who just have more money to spend on their vacation. But really, we had a great time and didn’t do a single “extra” apart from some TS meals.

And you could always go to T-REX just for the desser! You might not even have a headache afterwards if you were only in there for 30 minutes!

We are a family of 6 too and I always feel like I want to splurge on the extras beyond the already expensive plan of 9 park days and 10 currently scheduled TS meals. I’ve done MVMCP, HEA dessert, and KTTK and loved all of it but can’t justify the cost of extras for us for this trip. So, glad that someone agrees that wonderful trips don’t “require” those events, and that they really are just “extras”.

We did T-Rex last trip, DS LOVED it!! We sat in the ice cave with weird lighting, extreme noise, and the chef tried to kill me by serving me the allergen that I was trying to avoid. (TBH, I only spoke with the waiter who assured me it was not in the dish and there was no reason to believe it would be. I don’t have problems with cross-contamination, but there it was on my plate. The chef came out as well as the manager, and they made it right. Never again saw our waiter. But, I was stuck in there for nearly 2 hours on sensory overload. So my DS will have to eat somewhere else fun this time.) But overall, we enjoyed our food. Nothing special but good.

What a beautiful photo! Glad you all had such a wonderful time!!

This was me back in August. I wanted to do/see/ride every attraction in WDW. My parents appeared to want to visit every bathroom/restroom. Some more than once !!! I dread to add up how many hours we spent sitting outside them. Seriously people, learn to control those bladders​:joy:

I understand that when you need to go, you need to go. But I honestly don’t see how someone can have to go that badly after just 30-45 minutes. DH wasn’t so bad, he takes like 3 minutes. My MIL, though…10 minutes every 45 minutes really adds up to missing stuff or having to walk really fast to make up for that lost time!

Thank you so much for this report! It is very reassuring that WDW is still fun on a budget and without the extras.

One of my sisters is not as well off as the other 2, and she and her sons have dietary restrictions so planning for meals is occupying my mind a lot these days. On the one hand, everybody wants a vacation from cooking and cleaning up after meals but eating out at WDW has really shot up in price in the last year. (Made worse by the US dollar going from $1.26 to $1.36 Cdn over the last 8 months).

The bathroom stops are killing me.

How I visited every single bathroom in WDW in just a few park days”.

(I brought five meals already prepped that just need to be cooked in the crock-pot).

adults all played a couple of games of Catan,

Just realized I’m resurrecting an old thread about about to confuse people.

We’re planning our trip now and I think we’ll get in an additional 4-5 rides per day instead of bathroom visits. How can one person have to go so often?!?!

where praise the Lord nothing fell from the sky to annoy my MIL.

This was our favorite part of Christmas at WDW.

. But my teens are older than your girls and the obscure references rewarded their unusual tastes…

I pulled up the TP app to see what ride waits were and noticed that Barnstormer was offline. And boom! 2 minutes later we all had an anytime FPP to use! It was so fun to look at my kids and ask them if they wanted to ride BTMRR or Splash with FPP when the lines for each were over an hour long.

I played a similar game with MaxPass and Matterhorn in DLR 2018.

Figment was also down. Snagged a couple FPP for it and they converted to anytime ones, yay!

I’m so bummed they took ROL away. It was so pretty. I’d rank it above JBJB. And I liked JBJB, just not as much as I had expected to. That may have had a bit to do with the stress of the day as well.

My MIL and FIL are not so keen on us RDing MK tomorrow. They think we’re crazy and that there’s no possible way we need to be there that early.

We got to do CRT in 2016 and it was a once in a lifetime thrill we still talk about.

What kind of tickets did you buy for this trip?

I’m impressed no stroller! I am one to bring a LOT of stuff with me though…

I’m so glad you get to go back again so soon!

What kind of tickets did you buy for this trip?

This December 2018 trip or our upcoming trip? Those were 8 day no-park-hopper tickets. This upcoming trip…we haven’t bought them yet. Will be somewhere between 4-6 day tickets. Waiting to see if there are any specials and to see if I can convince DH that a 5th or 6th day would be a good idea.

We travel too much. I’ve gotten really good at paring down what we bring anywhere!

It’s getting him to agree to the 5th day that’s the hang up right now. Which is why I’m hoping for a sale!

But you’re right- that’s the logic we used for day 6 & 7 of our tickets- we already know one of those tickets will only be used for about 2 or so hours before we leave for the airport.

If I can get him to agree to 5 days then I’ll get 6 too. We also kinda want to make sure we will indeed still be here. I mean, all signs point to us still being here. But it’s not certain yet.