So Day 2 was our first full day and we spent it in Animal Kingdom. It was a mixed day of highs and lows, though more highs than lows.

It started well – I was very impressed by the Tree of Life – and we had a really amazing lunch at Tiffins. The food was up there with the best I’ve had at any restaurant in the (real) world, with great, friendly service to match. Our server did accidentally spill an entire cocktail over the table and my friend, but we just laughed it off, and we got a free cocktail in return and moved to a better table. (And I complained – nicely! – about a dirty glass, which resulted in another free glass of wine.)

Ooh – first great moment of the day: while we were waiting outside Tiffins, we spotted a gecko! I was so excited by this! 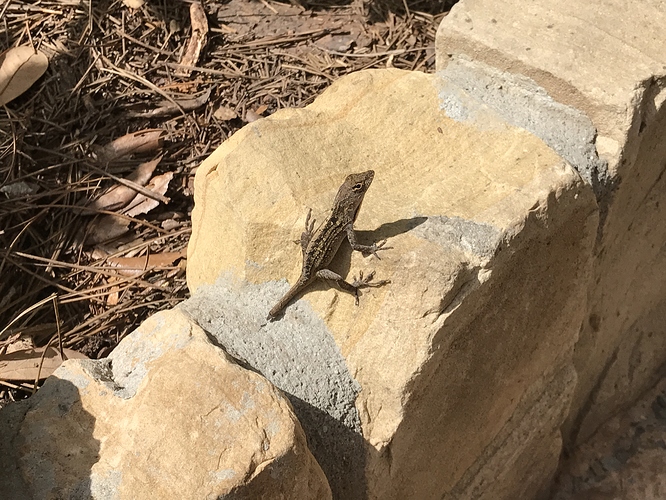 Then to Pandora – the floating mountains were so much bigger than they looked in the pictures I saw. I had been over-cautious about timings, so we had time to spare and took the chance to take a Kilimanjaro Safari. Terrific tour guide – very funny – and I love animals and felt very moved at seeing the “baby” giraffes and the zebras. I’ll be honest: I was a little bit disappointed, though. I thought the animals would have much more space to roam around. (Perhaps they do and we just don’t see it on the tour. But it felt more like a zoo than a safari park.) Plenty of animal sightings, but then they didn’t appear to have many places to hide.

From there to Everest, then Dinosaur, via Nemo.

I’d only had five hours sleep during the previous two nights (each!) thanks to jetlag and I hit a bit of a wall during Nemo. I guess my friend and I were both grumpy and we bickered a bit. It turns out we have different touring styles. I like to have a plan, but the conservative nature of the timings (I’d allotted too much time to get from one place to another) frustrated her. I guess also she was more into AK than I was, to be honest.

We had actually planned a second day at AK, but I was clear that I didn’t really need to come back – except to do Na’vi. (Our FPP was for FOP today.) Plus the house we’re staying in is so lovely that I wanted to spend some time there. So we pretty much ripped up the AK plan for next week. We agreed that we’d more have “anchor points” where we meet up, e.g. for special meals, but spend much more time touring alone. This is a ten day trip and that’s a lot of time to spend with one person!

Back to the schedule! Which meant FOP was next up. I just so love touching your Magic Band against the Mickey and watching the green light spin round! Especially for FOP with alleged waiting times at one point of 195 minutes. We shot straight in with no wait. But also no seeing the room with the avatar in the tank, which was disappointing. The ride itself was pretty “meh”, I thought. I’M KIDDING! It was AWESOME! I wish they had a camera so you could see my face during it. Pure childlike bliss and wonder. It is absolutely incredible. And zero motion sickness for me. No problems with the glasses staying on, either, though my friend said hers felt loose. We have another FPP for FOP for another day – it’s actually a Universal day, but we’re thinking of Ubering to AK just for FOP and then Ubering back again. Yes, it’s that good. (Another reason to follow that plan is Satu’li Canteen, which was also excellent – great value, delicious food and the in-app ordering made it so quick and easy.)

Next up, Rivers of Light. Tiffins was the dining package, so we had seating in the reserved area. I chose a spot at the very back row, so that I could stand up the whole time without blocking anyone’s view. I thought it was very creating and interesting, but it didn’t move me like HEA had done.

We then circumnavigated the whole park to get back to Pandora to see it at night. This time my disappointment was real. It wasn’t at all as spectacular as I’d expected. We got chatting to a lovely couple who have annual passes – they say they visited during the first week and it was so much better. For example the floors really glowed vibrantly back then. Maybe thousands of feet have worn away the special paint?

But my friend did take this great picture. 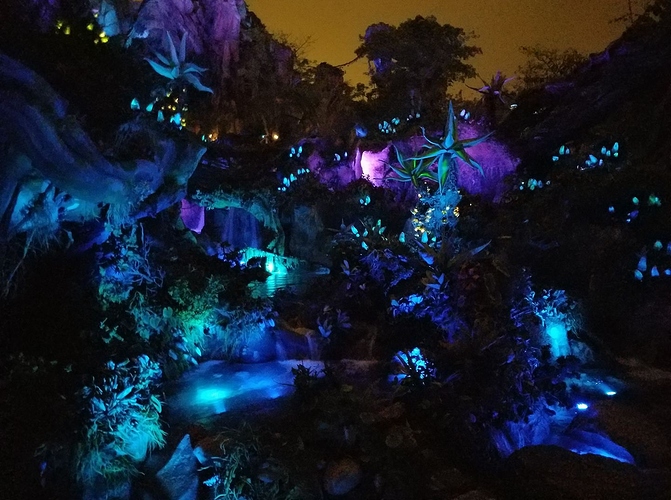 And I got this one as we left the park. 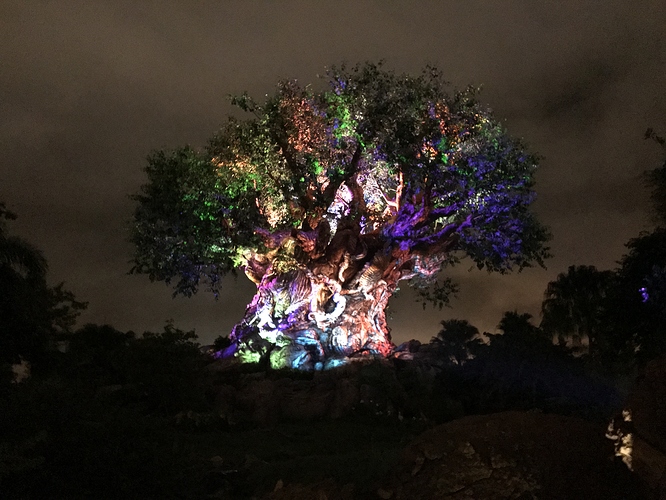 Despite ominous forecasts, there was no rain – or, at least, not that we saw. Perhaps we were indoors. It wasn’t too hot, either. The humidity was the “worst” part, but even that wasn’t as bad as I was expecting. Our strategy was to keep diving into air-conditioned places for relief. I had sunscreen on, but my friend didn’t – and she was fine.

Highlights: Tree of Life, FOP, Satu’li, the gecko, baby giraffe and zebra. Lowlights: tension between me and my friend – tune in to the next episode to see if we resolved it! (Spoiler: we did!)

I haven’t been to see Pandora in person yet but from what I’ve seen, I was disappointed in the nighttime aspect. That was really their bread and butter and I feel like it’s not nearly as magnificent as they made it out to be… which would be a hard task with thousands of people walking on and touching everything every single day and then you add in the elements like the harsh sun and rain.

I was hoping you would “take us along” with more reports! Thank you! You have me so excited for FoP next Sunday! Did you originally hav a visit to AKL in your plan for this day? Did you decide against that?

Love reading your posts - keep them coming! Very interesting comments about AK. And your photos are gorgeous!

I hope you make up with your friend

It should be more fun doing all the stuff ahead together

Yep FOP is a ride that just makes you smile

I have a family trip planned in January and definitely expect early on we will go our separate ways. Everyone is different. The key is realizing that. You will very much enjoy your alone time. I’m loving your trip reports. Thank you!!