Ubered to our 7:30am reservation at AKL Boma ($13.94 / 13min). Again, told the CM we wanted to eat & run and she happily obliged. The buffet breakfast here is of very good quality, I highly recommend. The CM filled up our park water bottles for us, which was perfect. 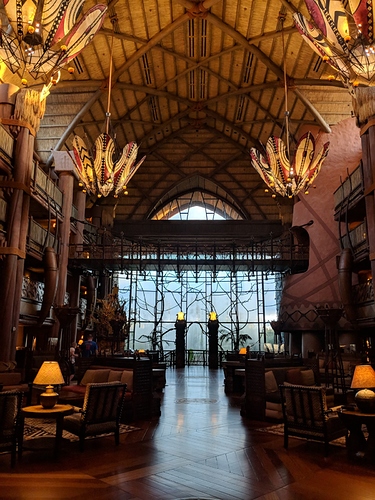 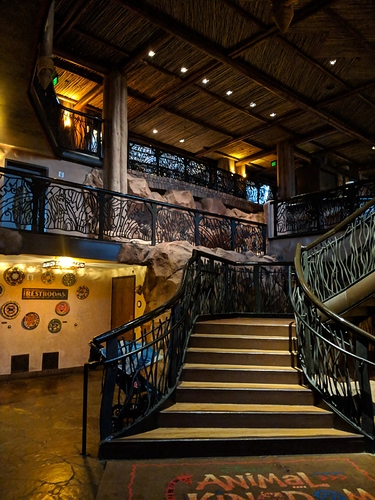 I did not get FPs for Flight of Passage and had watched several YouTube videos of rope dropping FoP and said to myself NO WAY! I had an alternate plan of hitting AK at park closing on our Epcot day, but that was a lot of running back & forth that I was not looking forward to doing. After a quick breakfast at AKL, we took an Uber over to AK and arrived at 8:04am ($7.42 / 8min). The lines were already past the ticket booths and I didn’t think we would make it. But we were very quick on our feet and stuck to the edges of the path, and managed to get through the herd in time to be just at the end of the bridge. 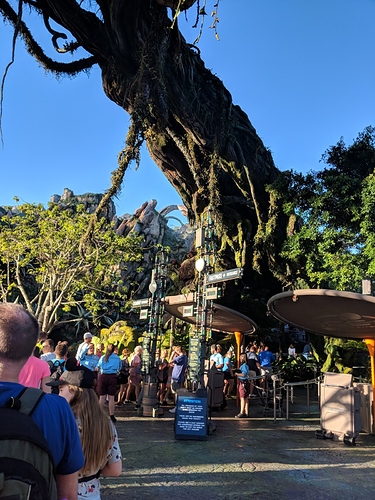 We made it to the actual beginning of the FoP entrance by 8:33am and exited the ride before park open! Yes, it is a wonderful ride. I do have some issues with motion sickness, and I did have to close my eyes on the steep drops. The air blowing in my face helped. The queasiness passed in just a few minutes after the ride, which was very beautiful.

We walked over to Navi River Journey for our 9am FP just as the ride went down. Looked like 100+ people outside the standby entrance. FP converted to Anytime. We caught part of Pandora Utility Suit guy as we passed and it was interesting.

Walked over to Expedition Everest. DS16 is NOT a thrill rider, but was feeling adventurous. I was feeling a little poorly but wasn’t going to let that slow me down. I rode EE 18 years ago and loved it. Well kids… 18 years is a long damn time. I die… I die… I die… It was so rough, and just hurt hurt hurt. DS was pissed at me for “talking him into it!” Ugh. Terrible. Never again.

Next, I rode Dinosaur alone. DS opted out, which was a good thing. I liked this ride back in 2000 but it has not aged well.

FP Kilimanjaro Safari: holy cow, standby line was outrageous! We breezed right on with FP. Had a nice ride and saw a very large number of very healthy looking animals, but the area we tour through just looks run down and terrible. Not sure why that is.

FP Kali River Rapids: we preemptively wore serious ponchos, everyone else on the boat completely soaked. It was an OK ride.

12pm lunch at Yak & Yeti: the tastiest meal of our trip. DS had firecracker shrimp appetizer and Korean BBQ Rib entree, I had wonton soup appetizer and Chicken Tikka Masala, all was finest quality and delicious! Again, we told CM we were on a speed plan and he was happy to help. We took dessert to-go: cheesecake & ice cream sandwich, both very good. We ate while we walked to It’s Tough to be a Bug.

At some point, we went back and used our anytime FP for Navi River Journey which was beautiful but pretty short.

Last was UP Bird Adventure… which was terrible! If we had been at the end of a row, we would have snuck out. The exhaustion hit big time and we decided to skip Festival of the Lion King & Finding Nemo. We decided to try the Disney Bus transportation back to the Contemporary. It took almost an hour from entering the bus queue to exiting at our resort, whereas Uber would have been less than 20 minutes from hail to hotel. Wish we had Ubered. Took a much needed nap.

For MNSSHP, I dressed as a very elaborate Alice and DS dressed as a very low key Mad Hatter. I chose to attend the party mainly for the extended ride hours and expected low wait times, but got more & more excited to dress up as the day approached… much to DS’s chagrin. As someone on the TP Forum suggested, I bought a very affordable package of 50 glow-in-the-dark necklaces from Walmart and brought them to pass out. DS was completely mortified! They came in a huge cylindrical canister which I can imagine looked like an RPG on the X-ray. TSA opened & did a special search of that suitcase, leaving a paper notice inside that they had done so. I imagine they were amused!

We rode the monorail to MK to try and conserve our energy for the late night. When we arrived in costume, the CM tried to route us into the very long queue for MNSSHP admission. I said no, that we had an Advanced Dining Reservation before the party and were using our Park Hopper ticket. We were through the regular entry bag search and MagicBand entrance in moments. That’s something to note if you wish to enter before the party.

We rode Jungle Cruise on a FP, then went to our 5:25pm Liberty Tree Tavern dinner. The traditional Thanksgiving meal was yummy. HOWEVER, it is ridiculous that a restaurant serving each table the exact same meal should function so slowly. We sat and waited to be seated staring at multiple empty tables. I saw a large number of staff constantly rushing around. But the meal service was slow as molasses, either due to an inefficient kitchen or poor management.

We were fortunate to have absolutely beautiful weather for our Sunday night MNSSHP and the ride times were all walk-on or very short, with the exception of Peter Pan. I passed out glow-in-the-dark necklaces to kids in line as we waited, which was a lot of fun and helped pass the time. DS was a little less mortified.

In addition to PP, we experienced: Haunted Mansion, Seven Dwarfs Mine Train, Prince Charming Regal Carousel, It’s a Small World, Mad Tea Party, Many Adventures of Winnie the Pooh, Tomorrowland Speedway, Buzz Lightyear, Peoplemover, Frontierland Shootin’ and Pirates of the Caribbean. Twelve attractions from ~7:30 to ~11:30 at a leisurely pace. We also stopped to watch the Cadaver Dans twice, DS thought they were great.

We elected to ride Pirates with zero line just before the Boo to You parade started, missing out on the headless horseman but enjoying the bulk of the parade which was very entertaining. I tried to get DS to stay until midnight, but he was falling out so at 11:30pm we walked back to CR and went to sleep.

Pirates of the Caribbean and Haunted Mansion had fantastic overlays for Halloween including live actors inserted into the ride, costumes, etc. These are two of my favorite rides and this alone was worth the price of admission to me.

I had read reports that the park was too crowded during MNSSHP. On our night it was busy but workable, the weather was absolutely perfect, and we rode everything we wanted with mostly very short waits or walk on.

Space Mountain’s special Halloween overlay was a black-out / all lights off. That didn’t sound like fun to me, so we skipped it. However, we did choose to ride Peoplemover during one of the fireworks shows. It was fun to zip around and see fireworks going off around us. But when we went through the portion of Peoplemover that goes through the Space Mountain building it was pitch black and, would you believe it, WE GOT STUCK!!! The music from SM was so loud, we could hear the CM coming over the intercom to direct us but we couldn’t make out what he was saying. We had to pull out cellphone flashlights to be sure the boogeyman was not about to get us. We were there three or four minutes before the ride was restored. A little funny and exciting!

Thanks for sharing the Uber times/costs.

I don’t mind delays, but I hate waiting in lines, and I’ve read a lot of trip reports talk about long (at least for me) waits for buses. For our upcoming 2-day trip I’m budgeting for all-Uber/Lyft, all-the-time. Even if we have to use Minnie Vans at their inflated costs, it’s worth it to spend an extra couple of hours having fun and not stuck in transit.

I absolutely abhor wasting time. I think most frequent Disney visitors have become conditioned to the bus transportation timing and don’t perceive it as a delay. Whatever portion of my Disney package price covers the transportation, it is a sunk cost. When I spend $10-$15 on an Uber, I’ve just “bought” myself up to an hour of extra park time and to me that is a great value.

We are fast walkers. I’m a cardio sprinter and he is a wrestler with excellent cardiovascular capacity. So, we can really haul ass on our feet! I would LOVE to take the two week WDW vacation with the nap at the resort every afternoon and the leisurely dining experience… yes - one more champagne, please! But my work is too demanding and I just cannot get away for that length of time. We essentially walked two marathons in this trip, but we enjoyed every attraction we wanted and all the deluxe dining we like, so it worked for us.

We were at that party too. Weather was fantastic!

If you saw my DSs as Syndrome and Dash together, you ran into us and we didn’t know it!

We left around 11:35 and had our own monorail car on the way back to the Contemporary. Saved some steps at the end of the night.

I did see a Syndrome!! We may have crossed paths!

Not sure if you have experienced teenagers yet, but mine refuses to allow photos… so I don’t have any good pics of us in costume… but I snuck this when he wasn’t looking on the Carousel. You can almost see his black top hat! 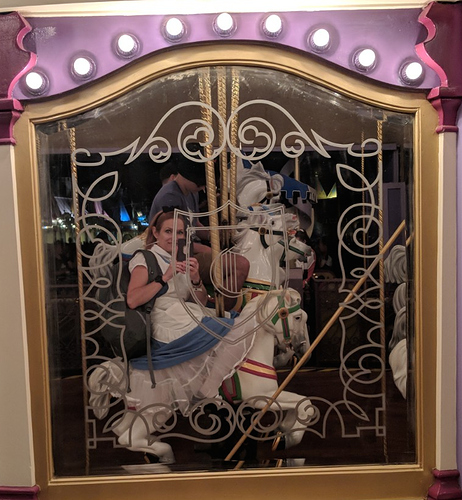 We saw lots of Incredibles, but I didn’t see any other Syndromes. Tall 4 yo with fake orange hair and homemade Syndrome costume… it probably was us! DS7 is even taller, was in normal store bought Dash costume.

Yes - it was a little boy Syndrome we saw

I am buying reduced GC for lyft before my trip to minimize the cost. You can get deals at Target, raise, etc.