Hello! Planning my first to DW in early September this year. I’ll be going solo. Hoping someone here can help, this is probably an easy question but I’m getting confused …

I want to visit and take a look around The Grand Floridian, P.O French Quarter and The Boardwalk area. From which parks will it be easiest/fastest/smartest way to reach each of these resorts and by which mode of transport. Id like to do a mix of transportation, to try a bit of everything. I won’t have a car and I don’t want to Uber. If you could give me a rough idea of how long it would take that would be great too.

But if id be better off swapping mode of transport, or if walking is an option please let me know

I’m already cutting one Magic Kingdom day short to have dinner at Trails End so I’d rather not go to a resort from MK (getting a boat over to Fort Wilderness…pretty sure I’ve got that one right!)

Thank you so much!

From Hollywood Studios you can walk to the Boardwalk. It is not too far. My hubby and I did that quite often during our trip. Well, we walked to EPCOT and you must go past the Boardwalk to get there. For us it was quicker to walk than to take the boat from HS.

If you’re at Disney Springs, you could take the boat to POFQ.

So for example I could visit Hollywood Studios in the morning, walk to Boardwalk spend some time there and the walk to Epcot in the afternoon with a park hopper and then get a bus from epcot back to my resort at Pop in the evening?

Perfect! So does that then mean I could get a bus from my resort Pop in the morning to Disney Springs, boat to POFQ and then bus to Hollywood studios (swapping DHS from morning to afternoon?)

I could get a bus from my resort Pop in the morning to Disney Springs, boat to POFQ and then bus to Hollywood studios (swapping DHS from morning to afternoon?)

Yup, you can do this too!

@shanneepantslovesdisney beat me to it while I was on the subway, but yep!

Oh man you are going to have SUCH a blast! Doing Disney World solo is a wonderful experience!

The Epcot/Board Walk/HS walk is, by far, one of the best things I did on my trip. Which is odd because it was so simple, but when I go again it has become a must do. Definitely recommended.

I know you said you didn’t want to go to a resort from MK, but don’t forget that the GF is right there by it and you can monorail to it (after passing through the Contemporary, TTC, and Poly stations), or even take a direct boat.

If you can also carve out some time to visit Animal Kingdom Lodge, I’d highly recommend that too. One of the best resorts on the property in my opinion.

I’m very excited. I’m coming from Australia so its a big trip for me!
How long would you say it takes to walk from Epcot to Boardwalk and Boardwalk to HS? I’ll work it into my plan

So would you say going to the Grand Floridian from MK is faster then Epcot to GF? If it saves me time in the long run I might do that.

MK to GF is much faster than Epcot to GF. From MK, GF is a short boat ride away or 4 stops on the resort monorail loop. From Epcot, you need to wait for the Epcot monorail, a relatively long ride to the TTC, and then switch to the resort monorail and wait again to ride 2 stops. That extra wait for transportation will slow you down and the Epcot monorail run is the longest ride time wise. Now it’s an excuse to ride the monorail which is never a bad thing in my book so it may be worth doing if it is your only chance to ride the monorail.

And yes, AK is the only park really close to AKL. The other 3 are all 10-12 minutes from AKL according to Google Maps so not that far really (I’d estimate more like 20 via bus though)…

As you should be! It’s is easily one of the best things I have ever done. How long is your trip?

The HS -> BW walk felt like it took a while, but I could be wrong, I wasn’t really keeping an eye on the time and it was dark so I had no way to really measure time other than pulling out my phone every few minutes. But from BW to Epcot felt like it was much shorter. After thinking on it, I want to make sure I’m not overselling this walk. I LOVED it, but there’s nothing special about it really. I do think it is faster than waiting for a bus from Epcot or HS to go to BW however I could be wrong, more experienced opinions could probably clarify better.

As far as the MK -> GF, Yeah taking a boat is way faster. You’re cutting across the Seven Seas Lagoon, so I would say from boat launch to stepping into the GF lobby, you’re looking at …10 minutes? Probably less. 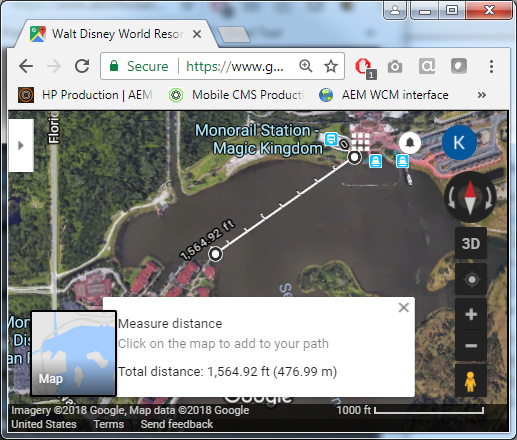 Yup, AKL is closest to Animal Kingom as @Damavs just mentioned. I rode from the MK straight to AKL, so I have no experience with how long the ride would be.

Thanks for the info! Yes, I think I will go MK to GF by boat.

A couple of people have said the walk HS-BW-Epcot was enjoyable so I don’t think you’re over-selling!

Okay I’ll still think about a visit to AKL.
I’m staying September 1st-13th. As I’m flying from Australia I’ll lose a whole day on my arrival day and most of my last day before I need to depart. But I’ll have 10 full days at DW and an 11th day to go shopping and will do MNSSHP on that day too. So I’m just now starting do work out how to spend my days

there so much to work out!

I wish I could remember how long the walk took from HS to EPCOT. No more than 30 minutes and maybe much less. Sorry.

It’s probably around 30 minutes, I agree.

Of course the only time I’ve done that, it’s been around Mile 24/25 of the WDW Marathon, so it felt a LOT longer than it probably is. LOL. I also probably didn’t think it was as pretty as it really is. I was just ready to be done at that point and not noticing my surroundings.

30 minutes is faster than I thought it would be anyway. Especially if you spend some time at the BW it would break up the walk I think

Yes it will break up the walk!

When is your trip?

Hah, my trip is the same time (well, almost. We leave for home on the 9th). Yup, there’s a ton to work out, but it’s going to be tons of fun doing so!

This place is a wealth of info and the folks here are great, so if you have any questions as you go along be sure to ask!