What’s the latest intel on when the Epcot overhaul will be completed?

I was just looking at this Bioreconstruct aerial shot and was struck anew at how much of the Area Formerly Known As Future World (AFKAF World?) is closed off. 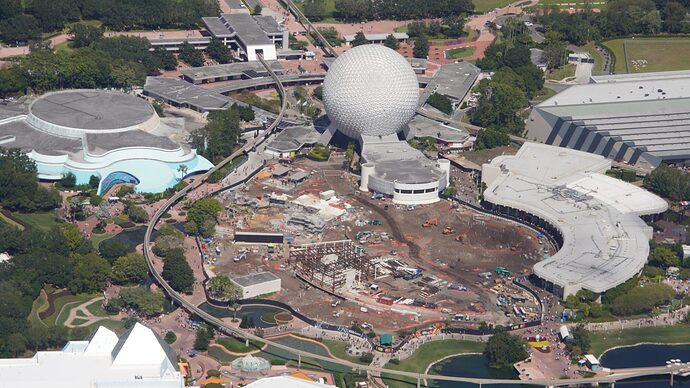 And then we also still have the lagoon barges—any word on whether those are going away along with Harmonious?

I endured the sorry state of Epcot on two trips in 2022 and I’d love to believe Epcot will be back to its fully beautiful self on my next visit in late November 2023.

I think all we know for “sure” (meaning, Disney accounced) is that Moana will be open “late 2023”. The rest of the “crater”? In some ways, it is less complicated than Moana, so perhaps they will start to make a lot of forward progress there as well this year. Once the new building is finished, it is mostly then concrete work (pathways and such), and landscaping.

So…is it POSSIBLE by November 2023? If it were Universal doing the construction, I would say, “Likely.” With Disney? I’d say, “I won’t hold my breath.”

I think the common belief about the barges (conjecture, not because of any confirmation) is that Disney will eliminate the barges. (I recall reading or seeing one suggestion that the barges may find life in some other way elsewhere…not sure about that.)

We are thinking our only park day in January 2024 (ahead of our cruise) will likely be Epcot. If so, then I’m with you on hoping it is all buttoned up by then!

I don’t get why it’s taking so long. I mean, we’re talking about relatively uncomplicated features, right? No rides or anything like that (now that Guardians is done). Nothing that will need lengthy testing.

I think there was a lot of initial underground infrastructure changes that, to us, we couldn’t see. Yanking out water lines for fountains, while putting in new water lines and electrical for the new design. Not that they couldn’t have done it faster…but I have noticed that the work APPEARS to be progressing faster now that they have gone vertical.

Well, that is encouraging, anyway.