Another review that I posted elsewhere: (of note we had the 7:30 reservation):

Walked out of Boardwalk 6:26 AM with two tired teenagers. Weather was spectacular. 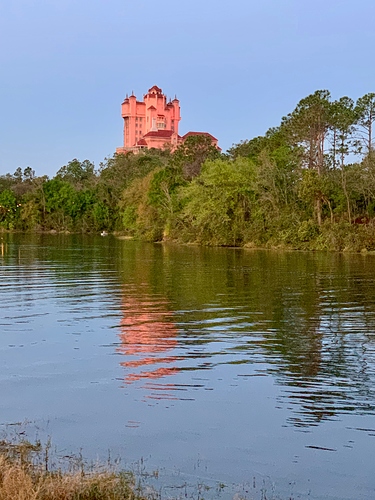 Short line at security and I have us halfway down Hollywood Blvd at 6:51. 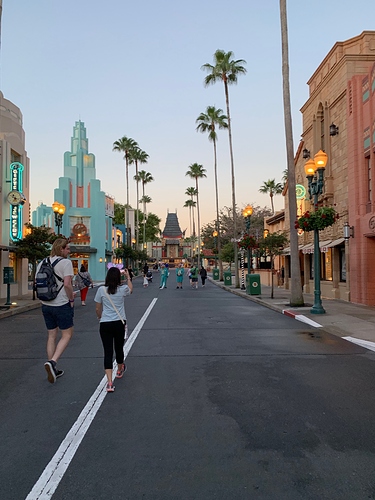 We went to Backlot Express for pastries and coffee first. Stopped to talk with a manager about DD’s food allergy, sat for 5 minutes to eat, and were out at 7:09. 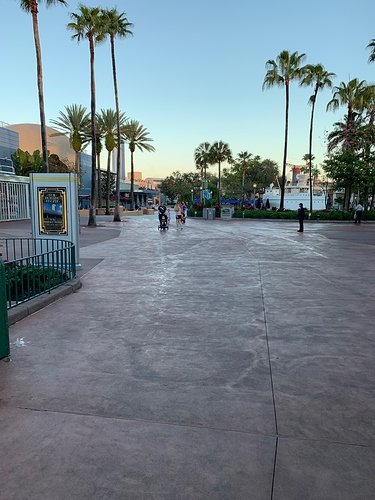 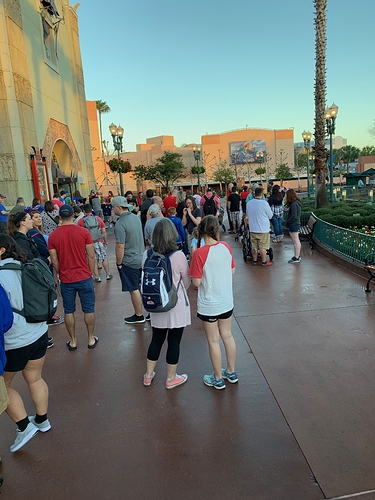 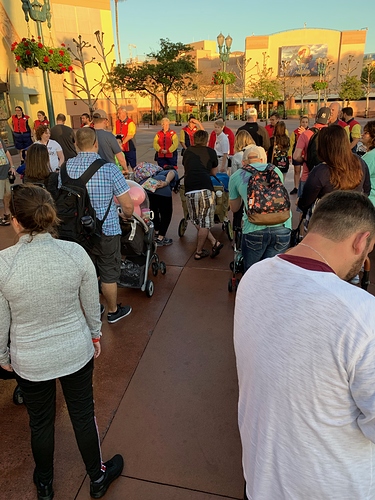 Even closer by the time we were heading into TSL. 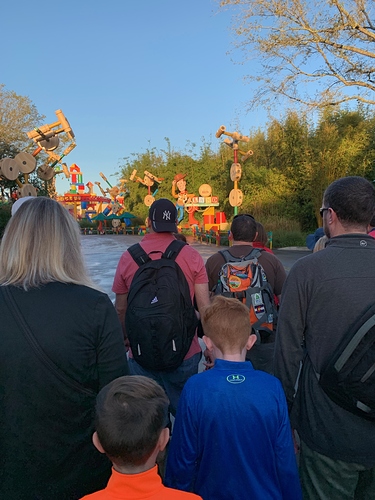 Started walking back to TSL at 7:22. As you head toward SDD stay to the right under the green umbrellas and you will end up in the best position to funnel into the line At 7:29 we were on the first car of the day on SDD!! What a fun ride. Line was about 15 minutes long when we got off so we headed to TSMM at 7:34 and rode once. Walk on. 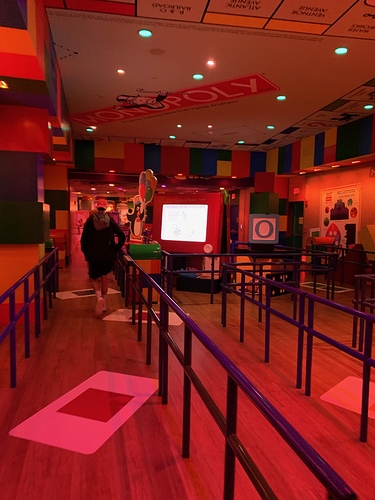 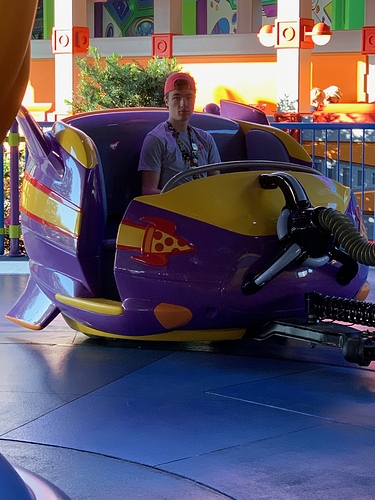 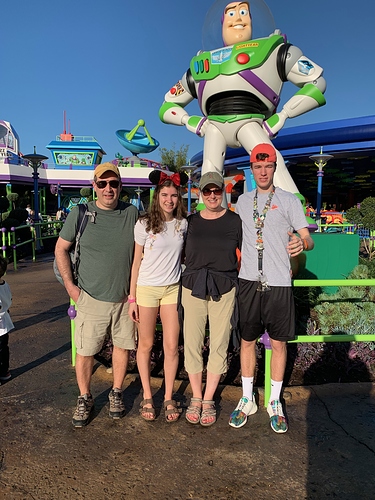 IMG_0453.jpeg3024×4032 2.6 MB
Ride was “meh” for adults and teens. I’d skip it unless you have younger kids. There were SDFP that I saw several times during the day that you could get instead. I think there are better uses of your EMM time.

Then back to SDD two more times. Line was probably 5 minutes each time. The back car on the left side is really the most fun.

I wanted one more ride but the line looked about 10 minutes long and we were trying to get to RnRC for RD. Grabbed some water and granola bars from the little break station by AS and headed out of TSL. As we turned onto Sunset at 8:44 the TSL RD crowd was heading in and it was definitely a sight to see.

We were the first people in the RD line on Sunset at 8:45 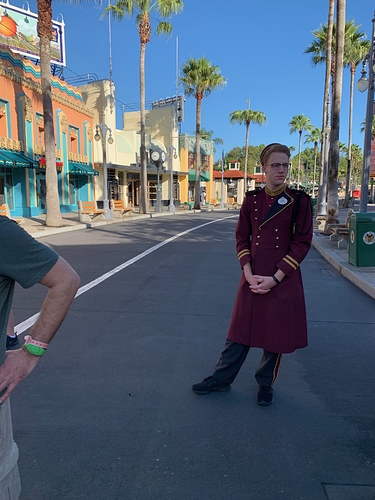 Got back to Backlot Express at about 9:30 and enjoyed a leisurely breakfast. We particularly enjoyed the Chilaquiles bowl and the chicken and donuts. We got 6 entrees between the four of us plus fruit and cereal from the buffet. We had TSMM FPP for 9:40-10:40 but it was down for the whole morning. Felt bad for all those RD people who planned to do SDD then TSMM without a FP.

All by 9:15 AM. I think this event is definitely worth the price.

OMG! How funny! TP won’t leave “ASS” in the post and kept changing it to ***. I went back and changed it to “AS”. Hope I didn’t miss any. So, if you see a random *** that doesn’t make sense, it’s Alien Swirling Saucers.

Sounds like it was fun. We are going to do this on 3/13. For us, we will ride SDD, and mostly TSMM, as it is my wife’s favorite ride. On our honeymoon trip, we rode it 21 times, which she beat me 20 out of the 21 times.
Thank you for the advice on how to get to the front. I will put that in our TP so we remember it.

What a great morning!

I can’t decide if I want to use FP that morning (for ToT, RnR) or use at Epcot that night. We will be there Memorial day. I am afraid I will feel “rushed” after TSL.

Also, were you happy with food and allergies? My DH has several allergies and one daughter is vegan.

What does EMM cost these days?

Kick-start your day in Andy’s backyard! Be among the first Guests to ride select attractions, meet Toy Story Characters and enjoy a bountiful breakfast.

Begin your day the Magic Kingdom way! Be among the first Guests to enjoy select attractions and an all you-care-to-enjoy breakfast.

While the breakfast isn’t as extravagant as PPO ADRs they don’t cost much more and with the rides! I hope they have these when I visit.

We have 7:30 EMM in July when we go. If they open up a 7:00 time slot does that mean all those who made a reservation later than we did will be able to enter before we do? Wondering if I should keep checking for 7:00 time slot to open and switch if possible?

What you can do is call and ask if you can change to the 7:00am. Our original reservation for TSL EMM was for 7:30am. I found out not that long ago that there was a 7:00am. I called and at first wasn’t able to get it switched. This past week, I was able to get them to switch it, so now we have a 7:00am. It is the same reservation number as the other one was. The reason we wanted to switch is that we will be there first and able to get in some of the rides before the other get in and can enjoy it a bit more.

I read on easywdw that time doesn’t matter.

For FPP I’d say it depends on if you want multiple rides on something. We knew we wanted to ride RnRC again so we had a FP even though we rode it at RD. Otherwise, I’d be inclined to use your FP for Epcot on a busy holiday weekend. We didn’t feel rushed after TSL getting to RD for RnRC and ToT. And we still made it back to breakfast with lots of time to spare.

As to food allergies, I was a little bit disappointed. The service was great, as usual. The manager came out with the binder to show us all the labels. But, there were about 6 different pastries and he only had info on 2 of them. Fortunately, DD just wanted a croissant and Froot Loops.

There were loose nuts on the buffet but they were not near the croissants so we did not ask for a “fresh” one from the back (he offered).

And we essentially got a pre-ride snack and then post-ride breakfast out of the deal. That increased it’s value for us.

100% doesn’t matter 7 or 7:30. I think they make the distinction to try to spread out guest arrival but NO ONE even sort of mentioned our time. And over on another forum it has been discussed quite a lot. No one ever mentions their reservation time being an issue.

Enjoyed reading your review. We have EMM booked for August and I’m hoping we have the same experience you had!!

Thank you! We are really excited about going. Just trying to figure out FPP!!

We just did EMM at HS today, April 9th, and wanted to post our experience. It was worth doing once… but not nearly as good as experience as many others have had.

We would not do it again. This is in contrast to EMM MK which was a MUCH better deal.

We checked in, skipped breakfast and so were the initial group waiting not far from the entrance to TSL when they let us go in around 723am. Still, this group alone was large enough that it created at least 20min wait for SDD, our first ride. An employee had warned us about this the day before …but I couldn’t quite believe it.

Having said the above, the details in TSL and SDD are amazing. Really cool to see.

After this, we did Alien Saucers once with no wait. Cute but not a great ride.

We then went over to meet Woody and Jesse and this took forever (!!), numerous people in lining complaining. After we went…they walked off on a break with a huge line behind us, those poor folks must have been livid, I actually felt very bad.

We did TSM once, had only about 10mins left in total and headed off to other parts of the park, stepped aside as the opening masses stormed by. We were a little done w waiting in lines at this point, being so early in the am.

We spent well over 50pcnt of our time waiting in lines if not more during EMM. Spring break crowds or not, it was on the border of feeling like a rip off. EMM MK by comparison… had no lines, for any rides including 7DMT.

SDD wait times immediately went to 75mins upon opening, so if you want to go on… EMM is a way to do it. But a FP would work just as well it would seem.

We ate around 930, food as reported was barely ok …nothing fancy. Pastries, cereal, yogurt and ability to order a few so-so cooked meals.

Frankly, I think they are letting too many people in this EMM with not enough capacity. Most all are going to only SDD and TSM so a lot of people, not many rides to distribute that volume.

As a complete aside, be sure to see the green army drummers!!! They are awesome !!!