Tower Of Terror: did you know this?

As you prepare to enter the preshow room, and are directed either to the left or the right, there is a directory listing various amenities within the hotel. Because the hotel is so old and dilapidated several of the letters in this directory have fallen off. It never occurred to me to even think about it, but I learned that those fallen-out letters, when unscrambled, spell something.

Did you know this?

Do you know what it spells?

Here’s a pic of the directory I borrowed from the web to share here: 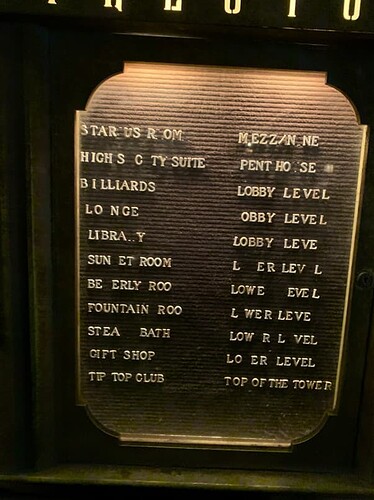 Don’t spoil it for others - I spent some time trying to work it out myself this morning before googling and others may want a crack at it too.

Wow! I had no clue. That’s awesome.

Did you know this?

where did the S from “Sunset Room” go? Is it not Sunset?

Ooooh! A second message from the beyond

maybe it’s plural…as in TOWERS, I mean there are two of them right or maybe the ghost is from Jersey and it’s US as in Yous

IDK. I’m only sharing what I learned and it’s confirmed by a lot of posts and videos out there. One image shows the letters involved in the scrambled message resting on the inner lip of the frame

Having issues with blurring then editing on my tablet.

You were responding to my comments

(Hopefully blurred this time) I found several more letters missing than in the answer - repeat of letters used. And, where did the second D come from?

Yeah I don’t think the letters are adding up. I did a quick Google search of that directory and there are many different versions missing different letters. maybe they switch it around to spell out other things as well.

maybe they switch it around to spell out other things as well.

Which I wouldn’t put past them at all.

Very cool. From what I am reading, you need to take the W’s and rotate them and turn them into M’s