Tips for the best character interactions

What tips do you have to interact with characters? When we went before, it ended up with my kids getting next to the characters and us taking the picture and that was pretty much it. At CRT, I told my daughter to ask Snow White which of the 7 Dwarves was her favorite, but that was it.

What do you do to have fun with characters?

Call Chip and Dale squirrels. They really like that.

Ask Lady Tremaine which of her daughters is the pretty one.

Ask Donald where Mickey is

Ask Lady Tremaine which of her daughters is the pretty one.

I asked that one as a conversation starter as couple years ago. Maybe because I’m a “dad” it didn’t go so well. I kinda got a look from all of them like… “yep… another creep…” It has made me so self-conscience about meeting female face characters ever since.

My 2 year old son got great reactions from all characters when he blew them kisses. I’ve got a couple good reaction pictures from that.

I would recommend this CM’s YouTube Video – To get help with your specific question start at 4:22

There is so much !!! Kenny the pirate has a lot on his website, definitely check it out.

My personal best were:

Telling Chip our favorite was Dale. Using the Force with them (my son was wearing a star wars t-shirt).

Just goofing around with Olaf.

Ask Woody if Andy’s name is written under his boot

Peter Pan needs very little, he goes on and on all by himself LOL

Have a kid challenge Gaston to arm-wrestling

My son dressed as Darth Vader to go see. Chewbacca. He didn’t like that at all.

This also got hilarious responses from storm troopers.

Also, don’t be nervous about asking for a specific pose. This is Gaston & I back in 2013. I will say that this pic is one of the motivators for me losing 50+ lbs since then. 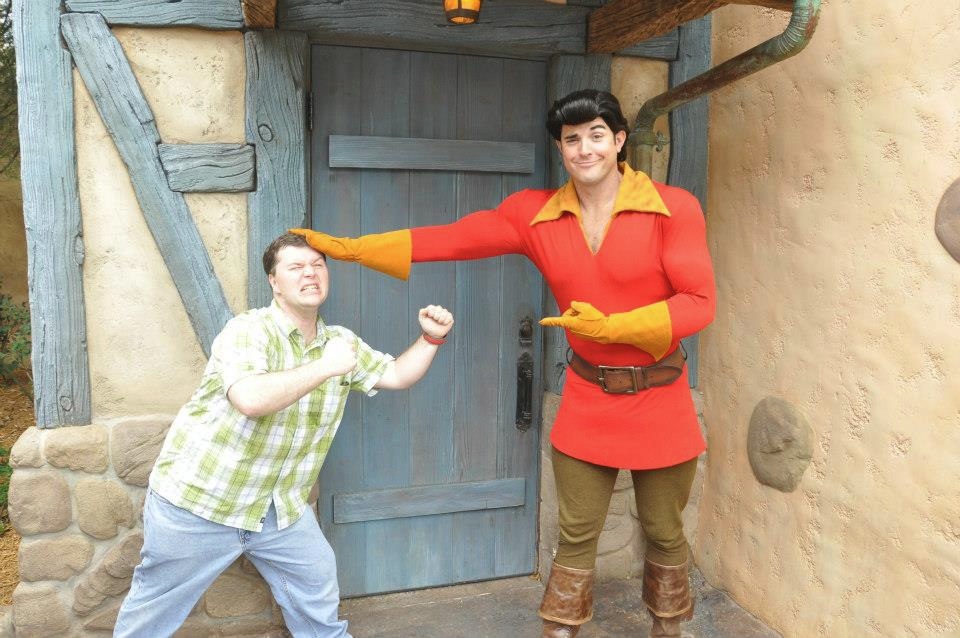 WOW! That is awesome!

Thanks! I did the cliche of “it’s not a diet, it’s a lifestyle change.” I don’t eat fast food anymore - period. I rarely eat sweets or red meat. Also, I’m very conscious of the amount of salt in everything. Giant helpings of vegetables fill my every plate. No long hours at the gym needed - just stopped stuffing myself with poor choices.

That’s great! I’m doing the opposite with some minor success. I havent changed my diet at all (~50% of my meals are restaurants / take-out), but I’ve started running 30-60 minutes 3x a week. I’ve lost 10 pounds in 6 months. At first I could barely run 2 miles, but now I’m up to 6. My goal is to run the Wine & Dine Half Marathon (13 miles) at WDW in November. I joke that I “run to eat”. But as I expected, my weight loss has finally leveled out, so I am starting to cut some things out, like sweets. The hard part is there are almost always doughnuts or cookies of some kind at my office. Temptation abounds!

Back on topic - I started a spreadsheet of ideas for character interactions a long time ago that has about 5 things on it (I just haven’t gotten around to it yet). Eventually, I’ll populate it with as much as I can fit and share it. So, keep the ideas coming!

Go to Kenny the Pirate’s website and look at his long list of character interaction tips. They are character specific.

Tigger - bouncing to him is always a good one

Belle - “What books have you been reading lately?”

Rapunzel - “What pictures have you painted lately?”

Moana (at MNSSHP) - I have a Pua and was bounding as Moana, so we talked about him.

Chip and Dale - if you’re wearing a backpack, they will often try to get in it to find food

Dug and Russel - more Dug, but… “Squirrel!” is always popular. “Point” too. Russel and I had a good “conversation about my Pride Mickey Ears hat” - while Dug tried to eat my popcorn. The CM who had my phone got a TON of adorable pics of Dug going for the popcorn bucket.

Pluto and I “did” taekwondo once because I had my dojang’s t-shirt on.

I would recommend this CM’s YouTube Video – To get help with your specific question start at 4:22

Thanks for the link… I definitely got sucked into that rabbit hole. I’ve spent probably the last 2 hours watching CMs’ YouTube videos.

I only did one character meet because they aren’t high on my list, but the interaction made me wish I had planned for me.
I brought a Scrooge McDuck comic book which he found really fun. Scrooge was great with everyone, but it seems even better with me. It was an interesting “conversation” starter(for lack of a better phrase), and made me wish I had brought one for Donald, Mickey etc. because I think they would have made for a great time.