I watched The Rescuers tonight on Disney+.

It was always one of my favorites when I was a kid. I had that series of Disney books your grandma could buy you each week at the grocery store (or maybe it was in a mail subscription?) and it was read often. I think the only one read more than it was The Sorcerer’s Apprentice. Anyway, I was reminded about this story somehow in the last week or so and found that it is available on D+ and got the chance to see it tonight.

Bernard and Bianca are the heroes we all need, and Penny is a brave little soul. Madame Medusa reminded me of Miss Hannigan from Annie, all the more so with Penny being an orphan. I forgot where The Devil’s Eye ended up so that was fun to remember.

I never did see The Rescuers Down Under… I’m torn. Leave well enough alone? Many sequels ruin the original. A good story told is often good enough. We’ll see!

I saw The Rescuers Down Under in the theater before I even knew the first existed. I laughed myself silly, but I was maybe 9?

I have always liked it better than the original, for what that’s worth.

So the kid (17) in our house likes Down Under better. They said it’s a different vibe but it’s better. And they loved The Rescuers as an early elementary kid. Parenthetically, one of our dogs was named Brutus after one of Madame Medusa’s pets.

I always wondered where Rescuers 3 was.

I love both, but had seen Down Under as a kid before I knew there was a first one.

I like the first one more, but Down Under isn’t bad at all. If the first one is an A, then the sequel might be a B or a B+ (and has plenty of people who prefer it, too).

You definitely won’t regret watching it.

If I don’t like a sequel I just will myself to believe it didn’t happen.

I loved both! The sequel is newer, but it has all the heart of the first one.

The original was one of my favorites as a kid, enough that I have been afraid to watch it in case it didn’t hold up. But with your recommendation, I think I will.

(Bedknobs and Broomsticks was a favorite I watched when Disney+ came out - it is still a great movie!)

This is one of my favorite pins I have - it is on my random, sentimental, page in one of my pin books.) 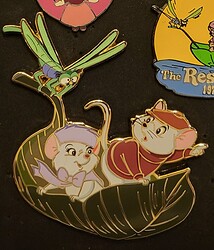 In the pin world, Rescuers Down Under is typically collected more than the original, which I never understood because I asumed the sequel would never be as good as the first. But I figured the popularity meant it was a decent movie.

It was always one of my favorites when I was a kid. I had that series of Disney books your grandma could buy you each week at the grocery store (or maybe it was in a mail subscription?)

I had these too!!! I’ve never actually seen the movie, so I’m excited to check it out on Disney+!

I love that movie so much!!!

The Rescuers Down Under was so good. Highly recommend!

When I was growing up, in the little dentist office we went to, there were all kinds of magazines for the grown-ups to read, but a small selection of books for kids to look at…one of them was a picture book version of The Rescuers. I loved it, and probably read it 50 times.

Oddly, though, I never saw the movie.

The original is very good. Didn’t care for Down Under as much, but still cute. Kinda of like the Fievel movies. First was great, the rest were cute but not better.

Maybe it’s the nostalgia factor, but I love Down Under! It is a little more fast-paced than the original, and it has some very fun new characters.

Down Under! It is a little more fast-paced than the original, and it has some very fun new characters.

Never having seen either movie, I’m picturing the characters from the original in a Mad Max setting.

There are a couple of parts where that might apply.