The Rationalization of WDW Trips (or really anything)

I find it really interesting how we are all built behaviorally. Reading through all of these posts on guilt, shaming, the questioning of safety and prudence and everything else that has come along with all of this is truly amazing. I fight through all of the same emotions of course as well. I think I am coming away though with two absolutes from this: 1) People will rationalize to whatever level they need to make things happen. Example: We have friends that will not let family see their kids or put them in any setting that could expose them to the pandemic. However, they just took their kids to Disney for an AP preview last week. I can name probably 50 of these examples including my own family (we took two HHI trips from May-June). The way we are built and the way we will rationalize whatever we can to get the right outcome is fascinating. 2) We should not be judging the actions of others. It does none of us any good to get up at arms about what people are choosing to do with regard to wearing their masks, travelling, etc… I have gotten caught up judging what others have done or are doing and I am realizing, my actions might not make any sense to them as well.

Bottom line: Your brain is going to let you make the decision you ultimately want to make. If that is whether to wear a mask outside or to avoid crowds, etc., you will rationalize a way to make it work. If that is from others and their examples, or soundboarding or just ignoring popular opinion. It will happen. So I say do what you want to do. Because you are anyway!

While I do think this is mostly true, I think there is another aspect as well…not simply rationalization, but modified behavior in order to support that rationalization.

Take the friends you referenced in your first example. It is very possible that the REASON they weren’t letting their kids become exposed was to ENSURE that they could make it to the Disney trip without contracting anything and thereby ruining it. I say this because this is what we have been doing, ourselves. We are being extraordinarily cautious, because we do not want to end up with a fever 3 days before our trip, and be forced to cancel it. If, however, we didn’t have the trip, I think we’d likely be LESS cautious (still cautious) because if someone came down with it, we’d self-isolate, but it wouldn’t impact such a huge financial investment.

In such a case, it isn’t rationalization of justifying going to Disney…it is that, IN ORDER to go to Disney, what do we have to do? That’s what it sounds like is the case with your friends.

You’re not wrong.
I’m personally of the opinion that we can only control our own choices and it’s pointless to get angry/upset about what others are doing or not doing.
I make my decisions based on the assumption that it is NOT human nature to think of others before ones self, and so I should base my risk assesment accordingly. If I go somewhere and see lots of people not wearing masks, I simply leave. I don’t get angry about it because there’s nothing I can do about it.

I agree. I just saw a posted meme that caused quite the argument and I said to my DH that at this point people need to not judge others decisions. Whether that be masks, isolation, vacations to the beach, Disney, etc., school decisions, and so on. We do not know what the situation is with anyone other than our own family. We can only control our own actions and make decisions that are best for our own situation.

We are being extraordinarily cautious, because we do not want to end up with a fever 3 days before our trip, and be forced to cancel it. If, however, we didn’t have the trip, I think we’d likely be LESS cautious (still cautious) because if someone came down with it, we’d self-isolate, but it wouldn’t impact such a huge financial investment.

I totally get it. So your decision to quarantine/isolate is based on the health of your family to get to go to Disney. My example was a little different. Our friends don’t practice much social distancing or quarantining at all. They just use it as an excuse for not allowing family to be around and to not bring them to functions. But Disney…different story. I mean, it is Disney right? 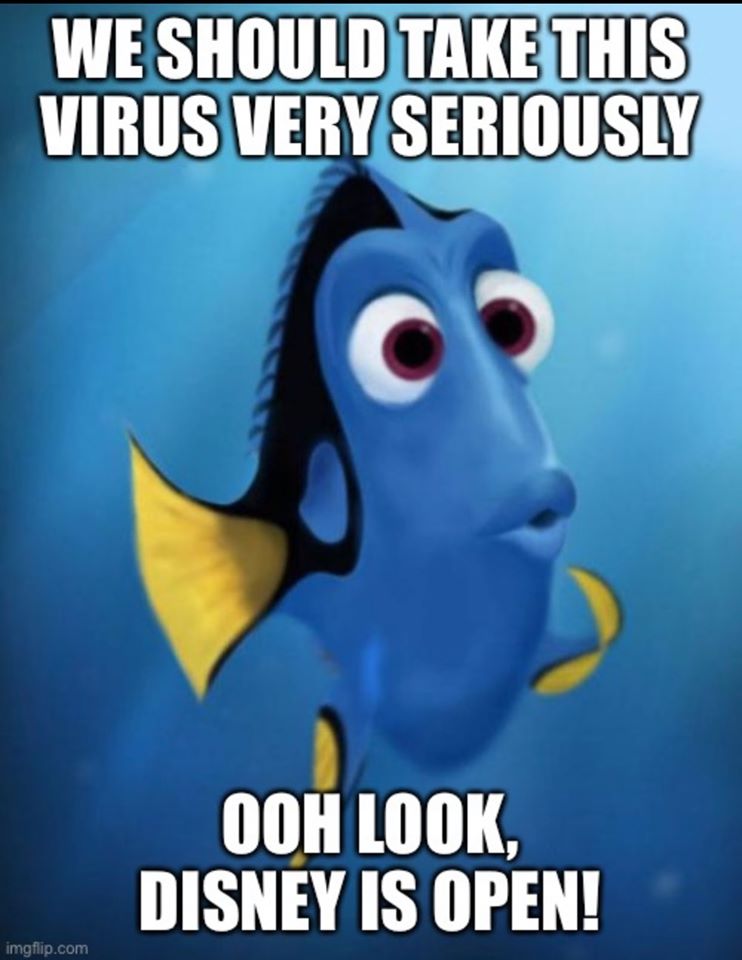 Personally I don’t care if you go or not to Disney or the Beach. You want to take the risk go ahead. What I do care about is that you catch it and then spread it. Most people these days are just sick and tired of the whole thing and want the virus to go away. Me too! Sad fact is the virus doesn’t care and it will spread and we all know it. Florida being a prime example right now. Do what you will as you are right I cannot stop you no matter what your reasoning. Remember one thing if you or a loved one gets sick with the virus you know where it came from and realize you infected many others so hopefully if you or your loved ones need to be hospitalized pray there is room and you and yours survive. Not bad mouthing anyone this is just a fact.

We do not know what the situation is with anyone

Flip side tho, if my family members go to Florida, I don’t gotta let them in when they get back.
I might love to see my grandkids and great grandkids, but I also have a brain and locks on the door.

It is so easy to fall into some of these psychological traps.

When you already believe something, any new data, fact, news or knowledge can be twisted to fit into your beliefs. This phenomenon has been widely studied in behavioural economics.

I live in a constant fight with my future self trying to protect against these pitfalls. A trick that sometimes works is copying the scientific method and deciding my criteria and hypothesis before new information arises (e.g. I will feel safe if numbers look like this next month).

But it is very hard.

I might love to see my grandkids and great grandkids, but I also have a brain and locks on the door.

True. And in our case, we plan to self isolate for 14 days upon out return. I have already let my parents know this so that they plan accordingly for groceries, etc.

@ryan1’s piont is similar to financial rationalization as well. In my family, we don’t spend money on boats or skiing, we have a modest house and cars, etc. But setting aside money for our vacations (especially Disney!) is a priority. So we go. Other families prioritize different things. They’ll do what’s most important to them, and scrimp and save in other ways if they need to.

That’s why it’s not a good idea to compare yourself to the Jones’s. They may have a shiny boat parked in the driveway, but you don’t know what they’re missing out on to be able to afford it.

True and very standard human behavior. We are only rational to some extent. Then we have emotions, needs, desires, hopes, fears… and a way of rationalizing our decisions based on all of those.

The pandemic has brought out a lot of examples for sure, I don’t mean here, but irl.

People will rationalize to whatever level they need to make things happen.

I am the King of Rationalising. I’m so good at it that it can make it very hard for me to make any decisions at all. I can persuade myself of the merits of almost any course of action. I’m then stuck with trying to compare them to pick the best.

If you want to kill me, give me a menu with more than half a dozen options.

The danger of it all is that we discount risk vs. wants/needs. It is in inherent in our decision making. We do it with food choices/diet, we do it with our finances, our discretionary spending, everything. But unless you are mitigating, you are making a choice that can affect you, your family and those you interact with. You are still going to rationalize to the end you want, but it could/will have consequences.

Still giggling over this one ! Of course, it fits me perfectly