if you want to sketch it out (electronically or a napkin, whichever works best) I can take it and do the graphical part.

Here’s a link to the one from DFB w/ the horrible font:

If it was just a poor choice of body font it wouldn’t be as bad as pairing it with almost no contrast between the text and the background. Definitely not done by a professional!

The reason for this is that the system is rewarding you for waiting the full two hours by granting you an additional Genie+ slot, as if you had two accounts. Every two hours you wait to use a LL reservation, you get another slot - like having three, four, etc. accounts

Okay, I had been hearing stories of this and thought, “no, surely people are misunderstanding”.

But I guess the doubling effect is real if you do it right with those rides that are more than 2 hours away. That could increase your passes exponentially. Of course it doesn’t do you much good unless you are at MK, or doing some serious park hoping, but still…

simple refresh method that worked to try to grab an optimal return time, especially for an attraction like SDD that seems to cycle through times in the morning?

I have one. It works for G+ not ILL$. What you do is choose “edit selection” and choose only the ride you want to refresh. Then that ride will show as the only ride at the top of your page, and you can pull the screen down over and over to refresh.

To your point it works more efficiently earlier in the day when it is cycling though more available times. I have gotten a ROTR to pop after "distribution was done. Here are pictues from 5:20 pm: 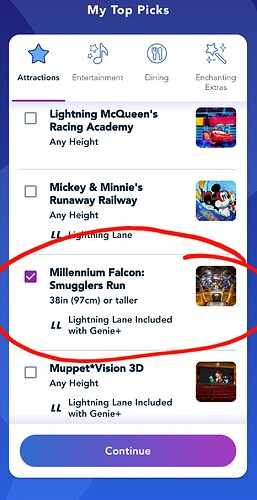 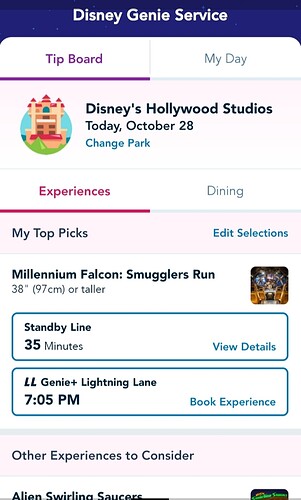 Then after about 30 times pullin the screen down to refresh: 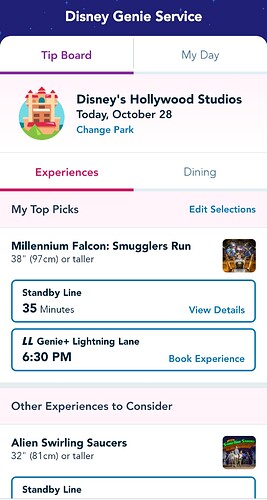 Took a couple of minutes, that’s all.

Good tip, thanks! @Jeff_AZ - worthwhile to add to the tips section?

Well this was more elaborate than I was planning, but below is a graphic showing the times to do each step in a theoretical day at Hollywood Studios. The first chart just goes far enough into the day to show me using each of the rules. The second chart goes all the way through the day showing how I was able to theoretically get all 12 attractions at HS done, with the ability to get 3 more LL reservations at another park, if that park opened later. Depending on crowds and return times, you could get even more attractions crammed into a day.

Let me know if I made any errors - I pulled this together (relatively) quickly so I may have missed something.

worthwhile to add to the tips section?

Wow. I am speechless, so just wow……

I think what I’ve discovered with this exercise is that there is no simple way to present this info.

YES!!! This is so convoluted and not easily explained. It is like a question on the GRE…person A and person B have to work together but only on days when person C isn’t working and also when person D is wearing green.

One silver-lining that I see is at if those of us with knowledge of the parks are doing a “WTF is this?” then your casual tourist will no doubt be clueless and maybe even following Genie’s recommendation, which, if you listened to the Touring Plan live feed where they compared TP and Genie plans head-to-head, then it seems like Genie really isn’t focusing on getting folks on rides they want to ride.

The simple way to put it is:

This is amazing. Thanks so much. It is crazy to see how it multiplies but also going to be so hard to track in the parks. Maybe Disney won’t close this loophole cause most of us will just mess it up?

I just remembered that the DBC Podcast did the visual thing before I did. Theirs isn’t as elaborate, but maybe easier to read since it’s smaller.

Now let’s say I show up to SDD and scan in at 2:45, and I grab something else TSMM) for later. I finish Slinky around 3 and book it to ToT. On my way to ToT my return time ends at 3:05. I immediately book RnRC for later. But I show up to ToT within the grade period

OPTION 1
book headliner at HS so SDD for 2pm
Then RD couple rides at MK and at say 10(8am open) book your first MK RIDE. Let that expire as described and book another MK ride for ASAP. Tap into expired ride and generate a 2nd LL for HS
and so on until you arrive at HS having 4 or 5 in place and having used 4 or so at MK.

OPTION 2
book anything at MK earliest slot. That should expire at 9 so then book next MK on expiry and tap in during grace period use that to generate another MK as early as possible rinse and repeat this as Jeff describes and then at some point start stacking HS LL.

I’m not sure which would be optimal for getting good return times for HS headliners!

Let that expire as described

Why would you let this one expire?! Did I miss something upthread? (Isn’t that just a wasted pass?) 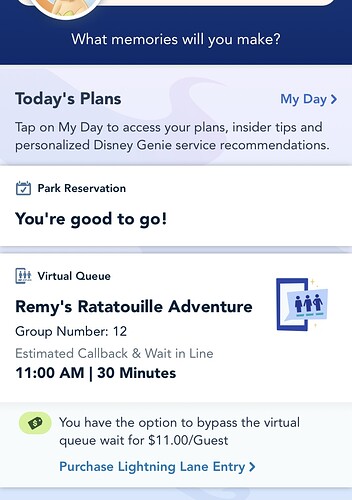 Wait. It wants you to purchase ILL even after you get a BG?

That wait can’t be longer than 30 minutes all day right??