The Adams' Family 1st WDW Trip: Like a boss!

This was the first time to WDW for DH, DS11 (turned 12 mid trip), DS9 and DD5. The last time I’d been to WDW was 1999, so basically it felt like a first visit for myself.
We surprised the kids by leaving on Sept. 15, they thought the plan was to leave the 16th. We drove from Augusta, Ga to Orlando and checked into our hotel for the evening. We stayed at Comfort Inn Maingate. When DS9 saw the hotel, he gasped and said, “Are we really staying here? It’s the nicest hotel I’ve ever seen!” Poor kid, obviously doesn’t get out much! The hotel was nicer than I expected. It had 2 queen beds plus a set of bunkbeds. Once we got settled in, we began to look for somewhere to eat. The hotel info book listed that the Sizzler restaurant offered kids eat free for hotel guests, so that sold us. The food was pretty good, our server was super friendly and the kids ate for free! We went back to the hotel and let the kids swim. It was a basic pool but because it had colored lighting, the kids thought it was amazing! We went to bed early, we had plans to attend a local church, and then we would be entering into the bubble for our first time! We pulled off our first surprise of leaving early, what surprises would tomorrow hold?! The kids were oblivious to what was ahead! Day 2 coming soon!

Looking forward to reading your report!

I love it! Also, it is a great reminder that kids enjoy the simple things! The cool hotel, the lights in the swimming pool, simple food.

Before I start the update, let me explain the title. I have a dear friend, who is a Disney guru and a fellow liner & she introduced me to this amazing group. I read and learned so much leading up to our trip, that I truly felt like we did our 1st WDW like a boss! Did we make mistakes? Of course, but overall, we had a very successful trip! So thank you, Liners!

Sunday:
We ate breakfast at the hotel, which was a Disney partner hotel, so we had our first legit Mickey waffles! They were really yummy! After breakfast we headed to Illumination Church. They meet at Celebration High School. My husband is a pastor and we started a new church 2 years ago. We meet in a middle school, so it’s always neat to see how others do things and learn new ideas. We really enjoyed the service.
After church, the kids were ready for lunch. What they didn’t know was that we had reservations at Chef Mickey’s at 1pm. We made a quick stop by Walmart to pick up some snacks and things. My DD5 saw a Minnie Mouse hat that she just had to have. For $10, we bought it because we knew it would be way more at a park. By this time it was noon, so we decided to head towards the Contemporary. It was so exciting driving through the gates and seeing Mickey & the gang. By this point, we’d told the kids that we were going to eat a special lunch, but they still didn’t know about the characters. When we arrived at CR, I had character shirts for the boys to put on and we discreetly put DD5 in her red polka dot dress. When we pulled out their autograph books, they were getting suspicious.
I was so excited about seeing the CR. The last time I saw it, it was 1980 and I was 8 years old. My most vivid memory from that trip is riding the monorail and being in absolute awe as we came through the middle of the CR. When I saw the monorail come through last Sunday, I literally teared up. Still so amazing!
We checked in around 12:30 and we had to wait a while. It was ok because we were early and it gave us a chance to take it all in. I think we were seated right about 1pm. By this time, the kids had caught a glimpse of Goofy. I wish I could show you the pic of my DD5’s face when she saw him for the first time! Goofy is my DH’s favorite, so we had some great interaction with him. When Minnie Mouse came she was so excited to see my daughter’s matching polka dotted dress. It’s amazing how they can communicate without speaking. She had my daughter spin and then she gave her the sweetest hug! So sweet! Mickey and Donald came next. Their interactions were pretty rushed. Pluto came last and he was so fun! He kept pretending to lick my DS9, and he kept play punching my DS11. We thought the food here was really good. It was brunch so the selection included breakfast and lunch choices. Our server was wearing a blue name tag & thanks to this group, I was able to tell her congratulations on your legacy award! She was very excited that we knew about it and assumed we were former cast members.
Sometime during lunch, I received a text that our room was ready. So when we finished up, we headed to CBR. We were given Aruba 54. I had used the tp room request and had requested Jamaica 44. I was pretty disappointed but I just let it go.
We got to the resort and got settled in our room. We were pleasantly surprised at the size. For some reason, I had it in my head that there was no drawer space. But we had plenty of space to put all of our clothes. I had brought a hanging closet organizer and we didn’t even use it.
Once we unpacked, we picked up our mugs and then headed straight to the main pool. Our kids absolutely loved this pool. The slides were so much fun. DH and I even ended up going down them a few times. After swimming about an hour or 2, everyone was starting to get hungry.
My DS9 kept talking about Disney Springs, he said a kid at church had told him about it! Of course, I knew all about DS but just hadn’t made any plans for us to go. SInce we were all in the mood to go out, we got ready and headed to DS. When we got their my kids immediately said this is a lot like Pier Park (which is in Panama City Beach). We kind of wandered a little bit, not really sure of where to go. My friend had told me that the Polite Pig was really good but we weren’t in the mood for bbq. We ended up at Pizza Ponte and we used our very first QS credits. We ordered 3 meals and it was more than enough to feed all 5 of us!
After eating, we walked around some more. We were blown away by the Maleficent & Nessie lego statues. By this time, it was starting to get dark, so we wanted to get to bed early because Monday would be our first park day! Next up- Epcot!

*I mentioned at the beginning of this post that I learned from some mistakes. Looking back, I wish we had done a park day on Sunday and then had a day like this on Wed. I definitely see the benefit of having resort days built into your schedule. Live and learn!

What a great start! I love how you had your TP, but still stayed flexible enough to know when to deviate. Sounds like you made some great calls on the fly!

A little teaser for things to come, we learn to fly by the seat of our pants by the end of the week!

You are rocking your first trip! Can’t wait to hear more!

I have experienced that same regret - even when I’m there SOLO!

One of my favorite memories is when our kids were tucked in bed the night before our first ever day in MK.

My wife and and kept looking at each other smiling with the knowledge that they really had NO idea what it was going to be like.

Terrific trip report so far! I was there the same time, the 17-20, and it was a BRUTALLY hot week! I’ll bet we passed each other in the MK on the 18th, we had CRT that morning at 8am.

(but we didn’t stay long at the MK, we had other destinations on our agenda)

BOG is my favorite restaurant spot. I just love the theming!

I was hoping to meet some Liners during our trip! Maybe next time!

I can’t wait to read more. You guys had a great trip. I know I’m going to connect with someone when they say that Mickey’s Philharmagic is a favorite!

Mickey’s Philharmagic is a favorite!

Yup! It’s a must do at least twice on each trip for us! 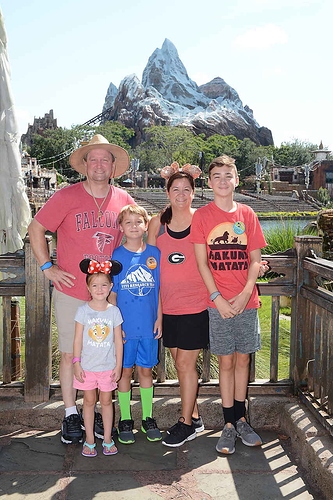 Now I’M crying!!! You had some magical mom wins today! <3

Absolutely perfect family picture! So cute! This is melting my super-crabby-at-Disney-right-now heart!

@nessagr I’m so excited for your upcoming trip!!!

I’m in a much better mood today, so now I am too