Talk To Me About Star Wars Galaxys Edge

Hello there! So… we are planning our trip to WDW end of October… my husband and I have collective been to WDW more than two dozen times so we are not newbs by any stretch of the imagination, but this SWGE business… I haven’t paid any attention to it. We aren’t really SW people, so it just never hit my radar but I have had passing “It would be neat to see” regarding the new park. I’m starting to read in other posts things about SWGE not paying off for Disney, no crowds, etc, so I’m wondering what that might mean for me. Part of the reason why I haven’t done any planning for SWGE while we are a DHS is because I thought the lines and crowds in SWGE would be too much for a family who is ambivalent about SW. Are the crowds really not there for SWGE? What is the deal? Should I plan some time in that part of the park for us so we can check it off our bucket list? Do we need special reservations for SWGE? Thanks for all your help!

Are the crowds really not there for SWGE?

There are crowds. But crowds have been FAR below what was anticipated. If it were just an issue at WDW, we might simply blame Dorian. But Disneyland experienced a similar fate of significantly lower than anticipated crowds.

But, there will still be crowds. Probably not enough to “worry about” though. The “reservation system” Disney set up only applied to opening day. And even then, by late afternoon of the first day they stopped requiring reservations because they got through everyone.

Right now, the crowds haven’t shown up. There a few factors like the big ride, RotR, not open yet and hurricane season. If you are going between now and December 5th, I’d definitely make time to stop by. It’s well themed and the queue MFSR moves pretty quickly.

Personally, I’m waiting to see what happens during the Holiday season when RotR premiers.

Go and enjoy it. Seriously. We were there last week and stood in line for baggage check to enter HS longer than I have ever done before at any park. All the time waiting I worried that we picked the wrong day to see SWGE. To my surprise it wasn’t crowded at all. It was fun. That being said however, if I ever go back I will study all the YouTube videos ahead of time that other people posted to get a better feel of the layout. Disney did a great job making this what is commonly called an "immersive experience’ so that guests touring the park felt like they are actually on a star wars planet I guess. It was a little too good for me. I had trouble figuring out where we were located in SWGE and what some of the attractions on the side actually were as I stood there looking at them … i.e.; a gift shop, restaurant, rest room, etc. No joke. It was oppressively hot the day we were there so we did not stay long. Later my wife saw photos of SWGE taken at night and we wished we had seen it then too to enjoy the evening ambiance.

@stephyod I just got back from a trip on 9/16, and I’m no hardcore fanperson either. I went to SWGE twice. Twice! I found it jaw-droppingly amazing and completely immersive. I rode MFSR after a 20 min wait on single rider. Very cool attraction. Oga’s Cantina feels like an exact replica from episode IV. The drinks are hilarious and the bartenders are a hoot! Talk to the “Villagers.” Everyone has a different backstory, a job, an opinion about the presence of Imperial Forces, etc. Right in front of everyone, two stormtroopers arrested a villager for being a spy. Then I saw Rey sneak around in a speeder-garage type place, rummaging through cabinets and stealing parts while trying to keep hidden. Life on Batuu is going on all around you while they welcome and accept you as a “visitor” on their planet. Everyone is all in and committed to their parts. Whether you’re into SW or just passingly familiar with it, Batuu can be an incredible experience. I highly recommend it.

Just for reference, here’s the left half of the “Concoctions” menu from Oga’s. The Fuzzy Tauntaun really does make your lips go numb. 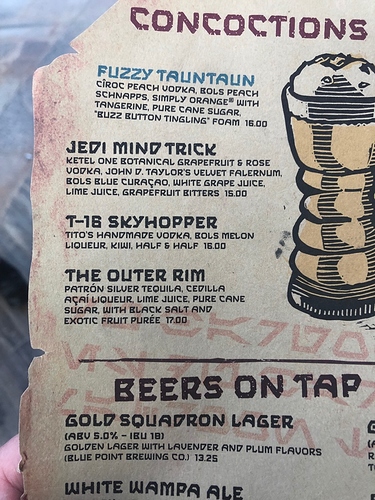 I was there last week. Originally after I heard they were opening SWGE early I just thought, ok I will just avoid the chaos. I am a Stars Wars fan but did not feel I needed to go until everything calmed dow. Then my nephew decided to join me just so he could go to SWGE. So we ended up going on 3 different days. The crowds were just not there. We went during the EEMH and at night. I have ridden MR 7 times. It is a fun ride and the details in the land are phenomenal. Oga’s was a great time. There is so much to see and so much going on in the land it is definately worth going to see.

I am like you: know Disney and not into SW. But we are going into SW on our trip b/c of the lower crowds (RoR still won’t be open when we’re there) and b/c we were able to get an Oga’s res. I think spending a little time in there and having a weird drink sounds fun. Will only try to do the ride if it’s not too bad of a wait.

As with anything at WDW, I think you’ve got to experience it at least once to decide for yourself. Crowds will probably not be as big a factor as you’d think unless you will be there on a holiday week.

My personal opinion - SWGE is a phenomenal land and the MFSR attraction is an amazing experience (though maybe not the best ride). My son loves his droid, which we got at a reasonable price. Browsing the shops and sampling the food was lots of fun as well. I still want to go back to build a lightsaber sometime. The RotR attraction looks like it will be first class E-ticket madness, so if you’re there after December 5th, you should try to ride it.

I talked to a cast member last week that was helping with the test runs of RotR las week. He was currently working on MF. He confirms that it will be a game changer and that you will not be disappointed. Disney is claiming it is the most technologically advance ever and they will not disappoint. It will be well beyond MF and FOP. I cant wait for this