The trip was super short, not this report

My boyfriend and I drove up from Ft Myers on Sunday 2/24 and went to Epcot, stayed overnight at Pop, went to Magic Kingdom 2/25 and drove back that evening. So it was two shorter days.

The drive took us under 3 hours, and we used back highways instead of going up 75 and across 4, which worked out well. I was nervous about getting to EP with the Princess half marathon ending there. We drove to Pop first (arriving around 9:30?) and took the bus, which took about 10 minutes longer to arrive than the MDE app said it would, but the wait wasn’t awful. Traffic was busy getting to the park but we were never stuck in a major traffic jam and we arrived a little after 10. Then the real wait started at dreaded bag check. We have never been in lines like that, since we’re usually early to the parks. It was over 45 minutes to get though, but we still made it in time for our first FPP. 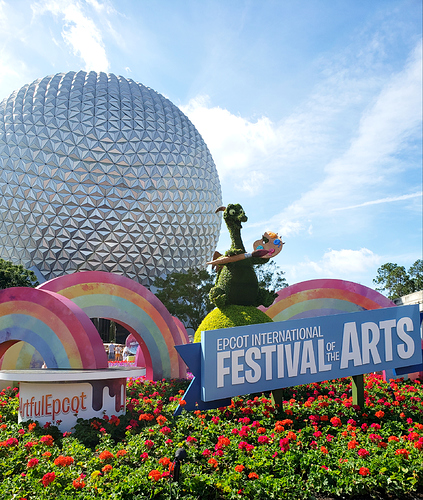 We hit up Spaceship Earth, Soarin, Mission: Space, and Soarin again with FPP. We took a quick break to try the soda flavors (ick Italy

) while waiting for our second Soarin FPP, but otherwise we just bounced between rides before heading to the WS to enjoy the countries and the Festival of the Arts. The living statues were fun to see, the way they can stay frozen is so impressive, and one stole a girl’s water bottle and really made her work to get it back 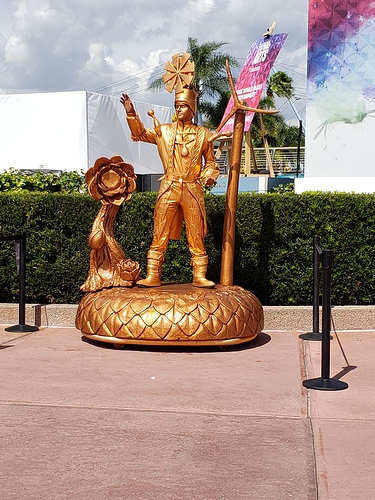 We enjoyed wandering around and eating our way through the festival. Foods we tried included the lobster bacon mac and cheese (pretty good), the savory croissant donuts (delicious but way too small), the beer and popcorn flight (wish the popcorn was crunchier but fun), the beef and beer cheese poutine (delicious and a decent size), and lava cake from France (yum!). Plus a few drinks along the way. 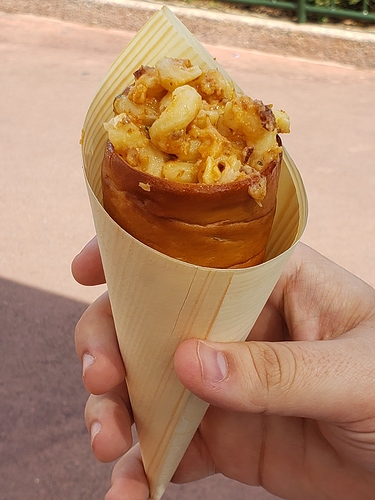 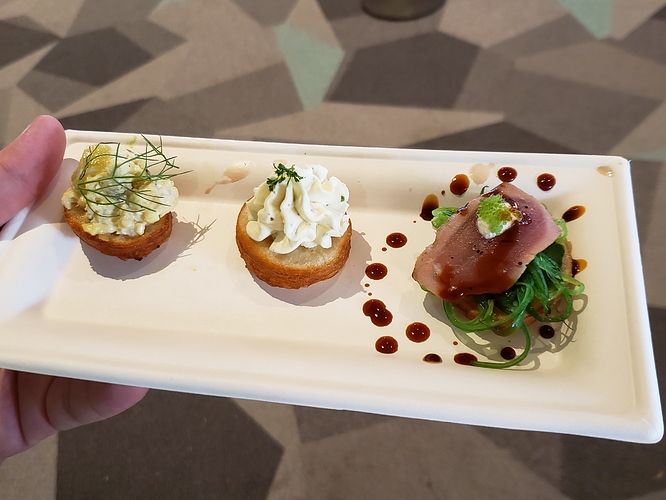 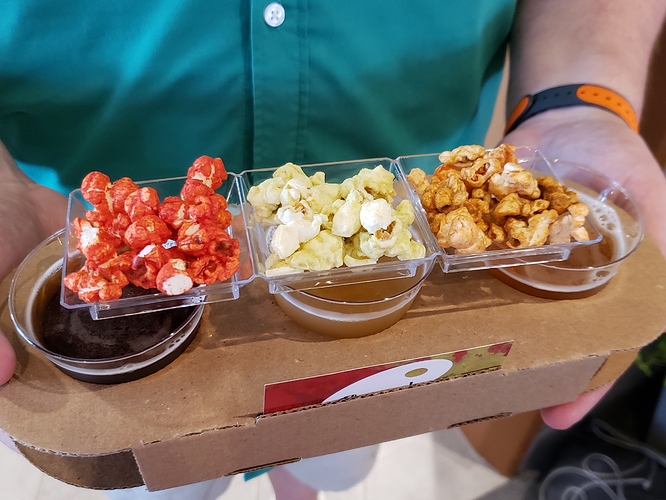 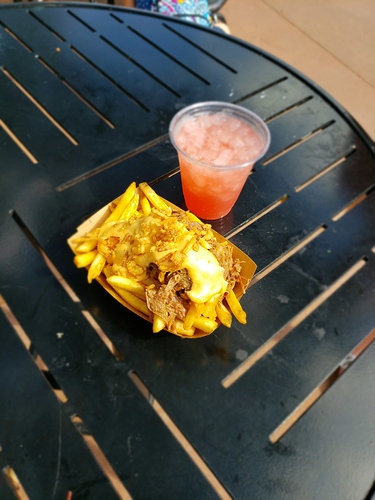 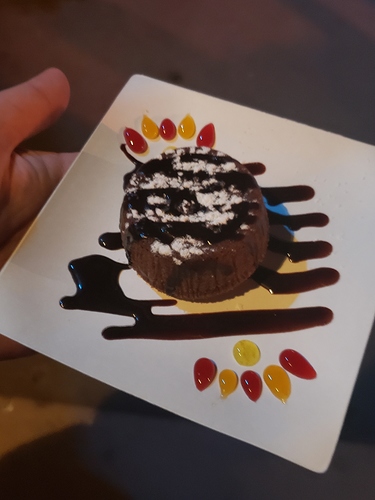 We had fun painting the mural and looking at the chalk art; the artists shops were also fun to look at but there were too many to go though them all. We did stop at the QS place in Mexico for a more substantial dinner, the food was good but nothing overly interesting. 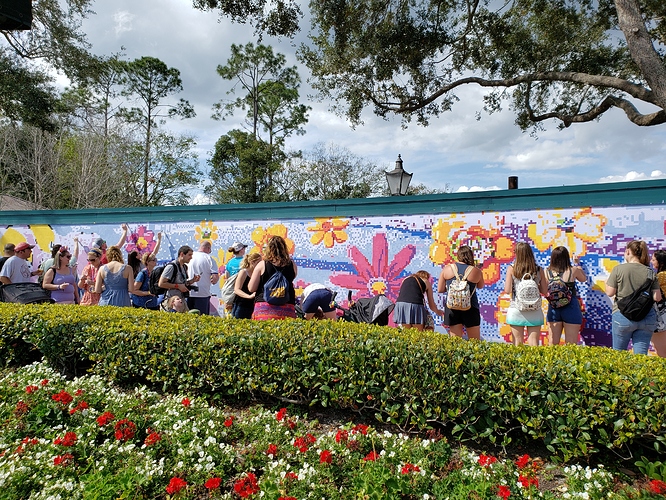 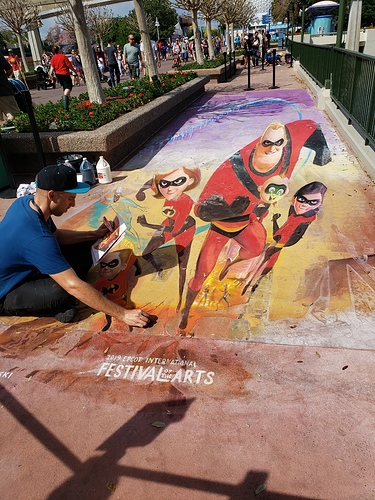 We tried to spend some time in the countries we skipped last time, so we watched the Voices of Liberty (beautiful and well worth seeing for an afternoon break) and the American Adventure (one and done for us). Then we saw the broadway concert with two Lion King stars, which was wonderful! They did songs from Lion King, Hercules, Aida and Little Mermaid. We picked up an evening FPP for Frozen, grabbed a school bread from Norway, and ended the night with a perfect (and surprisingly uncrowded) view of Illuminations from along the wooden fence in Canada. The iron fence to our left was packed with people so we couldn’t figure out why nobody was encroaching on us, but it was perfect!

We never did get a room ready text (only got two saying it wasn’t ready yet) so I had to use the app to find our room number, but our TP request worked again in getting us a king bed! We were in the 60s section with a lake view - too bad we didn’t have time to enjoy it! My BF loved the refurbushed rooms, I wish they had a splash more color but everything felt clean and fresh. The shower and the extra storage were all wonderful, so a bit too much white seems like a small price to pay.

Thanks for the report and the pics. We are looking forward to heading there in 10 days

Day 2 we got up and out pretty early with breakfast on the go. We arrived at MK around 8:15 and zoomed through bag check. It was surprisingly quiet out front. 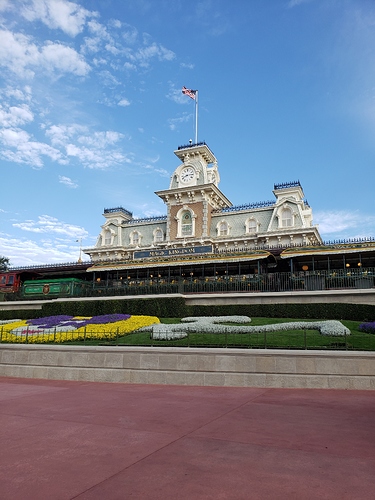 We had no plans until the welcome show, so we took some pictures and I bought the BF a hat (he was complaining about the wind ruining his hair

)… $35 for a ball cap. Ridiculous. Then we planted ourselves near the Liberty Square entrance where we could mostly see the stage still. The welcome show was cute, but now that I’ve seen it, I’m not sure I’d sacrifice a better RD spot to see it again.

We were walked over to BTMRR and the wait was listed at 10 minutes. It really only took the amount of time it takes to weave through all the queue and one loading before we got on, so it had to be less than that. Then we did Splash Mountain since it was a walk on. Turns out there was a good reason for that… it was cold! We mildly regretted that decision for the rest of the morning (and I firmly said no when he asked to do it again later since my jean capris had only just dried). Then we did Haunted Mansion and walked right into the preshow with no wait. After that we waited about 15 min for IASM and did our first two FPP for PP and Space Mountain. Wr took an iced coffee break and dried to dry out in the sun before our third FPP at SDMT.

From there we did lunch at BoG. This was our second time and we enjoyed it again, though finding a table was difficult. We both did the croque monsieur (which I did last time too) and it was tasty and filling. We split a cupcake to “try the gray stuff”, it was a pretty boring cupcake, but pretty! I wouldn’t order it again. 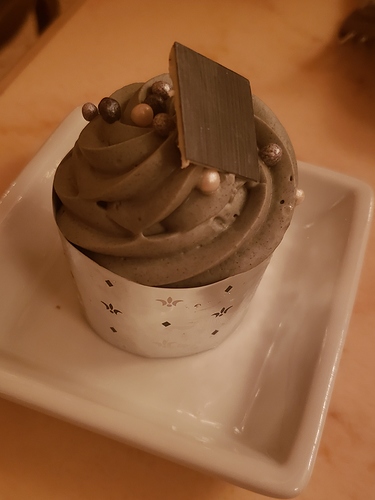 Afternoon was all about picking up FPP. We picked up Pirates, Winnie the Pooh, Buzz Lightyear, Under the Sea, another SDMT, and another BTMRR. Refresh refresh refresh! We could have gotten more if we were staying later, but we actually had a JC that we skipped to get an earlier start back. We did wait for Pirates for about 35 minutes, but it was only the second ride we had to wait for so we survived.

We also decided not to wait for dole whip, the line was insane and mobile ordering was down. We decided to try the citrus swirl instead, both of us agreed it was okay but didn’t compare (we both have a sweet tooth so it was a tad too tart). We hit up Casey’s for buffalo chicken hot dog and bacon macaroni and cheese fries on the way out. Both yummy. 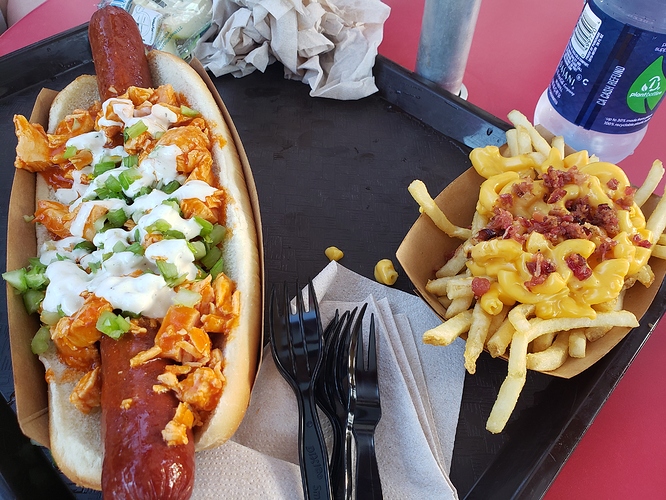 He wanted ice cream on the way out but the line was crazy. We ended up taking the AoA bus back since we missed the Pop bus by 30 seconds, so we stopped at their food court for coffee and gelato. We didn’t explore the whole thing but it seemed like they had some great options. The walk to Pop was shorter than I expected, it’s definitely doable if one bus is arriving before the other.

We left Disney around 7:30 and were back in Ft Myers around 10:30. It was exhausting, but worth it! Crowds were doable (5 at EP, 7 at MK), weather was beautiful (though a little hot the first day), and I’d definitely go back in late Feb after break again. Hopefully for longer next time!

LOL I expected to open this to see it say, “We had a great trip.”

That would have been super short!

if only it had been a super short report instead! two days wasn’t enough!