My kids are 5 and 7. I know the 5 year old will need a stroller. She compains about walking through Costco (but I make her walk anyway). Also, I know that the August heat in Orlando is not like the heat in New York. Last time she needed it. My 7 year old will need it sometime. To avoid lugging a stroller I am thinking of having a $70 double umbrella stroller shipped to the hotel from Amazon. It’s only rated at 35 pounds per child. My children are about 50 and 90 pounds. Do you think it will last for 5 days or am I asking for trouble (and a trip to the ER). After the trip I will leave it at the hotel.

Delta Children LX Side by Side Tandem Umbrella Stroller 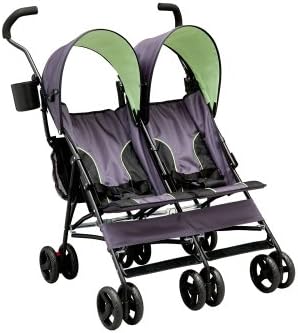 I have looked at offsite rentals and my children exceed their weight limit. I don’t want to rent from Disney because I want to use it to leave the park as we head to the car. Thanks in advance for your advice.

I don’t know anything about that stroller, but I did use a stroller for more weight than it was rated for. Biggest thing, don’t let them “flop” into the stroller. If it’s well made and they’re careful it shouldn’t be a problem.

But how tall are your kids? We used a good quality umbrella stroller (complete with handles that raised and lowered for whomever was pushing) until my youngest was 6. The problem came with where to put his feet. He didn’t like using the footrest, since it was too short. In fact, when he used it, often he was pushing it down against the wheels, which made it hard to push him.

Is this stroller in a local store that you can take your kids and test them out? Maybe at least test them in a similar model, because yes, it’s doable for the few days you’re there, but that was our big issue.

How much do they weigh?

We used the ever popular GT jogger mini. http://www.babyjogger.com/en-US/city-mini®-gt-double. 50 lbs per seat. We rented through kingdom strollers.

Sorry - I see one is 90 lbs. I’m wondering if they could take turns? How much do you think the older will use it? You could also get a step for a single so the she could just glide.

What would it cost to rent one?
My girls are each about 45-50 lbs but we usually had only one in the stroller at a time. Maybe yours can take turns?

Is that stroller too wide for the new stroller restrictions

I would look into renting a double from one of the stroller rental companies (we’ve used Kingdom Strollers in the past). Then you can rent a stroller that will accommodate the extra weight. I’d normally same ignore the weight limit but your kids are significantly over this one’s limit.

thank you for all of your comments! I was concerned about renting because they are over the weight limit for all of the outside vendors I have looked at. I didn’t want to take the chance of breaking it, but didn’t care if I broke a cheap one that I purchased.

I have a stroller research obsession. We brought a side by side double with us. It worked well but it did have a basket underneath which was key (doesn’t look like the one you linked has a basket). My DD4 was about 50 lbs. on our trip and is super tall so I have the same problem as you with weight limit and where do you put her feet so they don’t drag, and so her head actually fit under the canopy. I would worry on a stroller with significantly lower weight limit than your kids weigh that the dimensions of the canopy etc. would also be a problem.

I got this one for our trip. Worked well for us. It was on sale somewhere and I had a gift card so I didn’t spend this much. DD4’s feet did drag if she didn’t keep them up. She could fit under the canopy if we reclined the seat. Link: 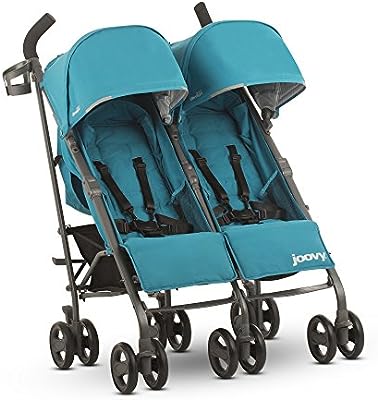 I bought this one gearing up for our next trip. Will have a DD5 and DS3. 50 lbs. limit each seat. The seat in back is a real seat not just a fabric sling. I will probably take the front bar off the front seat so my son can hop in and out. I think we can buy 2 more cup holders to put in each place where the bar would lock in. Link: 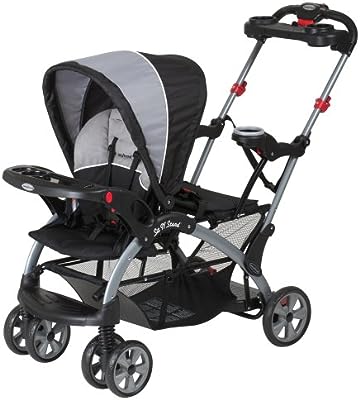 We had two generations of sit ‘n stands (have six kids ages 6-19 currently). I. Love. Sit ‘n stands!!! So much room for gear, too. The double sit and stand is my favorite.

I don’t think you are honestly in that much danger of breaking a stroller by exceeding the weight limits as in danger of breaking your back! You do NOT want to be pushing 140 pounds of kids in a cheapie stroller. There is also zero basket and basically zero shade. Are you hoping the 5yo will nap? I think the 9yo’s head will not even touch the back of it either.

I would rent a City Mini GT single or double. I would think that a 9yo could probably just take a few breaks and then you aren’t pushing half an empty stroller. I have a single and my son weighs about 35lbs but is really tall and fits great in it. It also pushes really nicely.

thank you! The ones I can rent are nicer. I was just worried about breaking it mostly. I can let the older on take breaks in it and let the younger one ride it more

thanks we had the sit and stand and I liked it. last year we took it to Disney but on the way back it was just to much for me and I abbanonded it. (we use public transportation to and from the airport.)

We purchased this stroller for our WDW trip 3 years ago to be able to have a lightweight, easy to fold stroller for the airport & busses. It was perfect for that purpose & then became our go-to travel stroller.

We use it on our fairly frequent Disneyland trips and our now 6 yr old & almost 8 yr old still use it comfortably for when they are tired (the almost 8 yr old is usually for short breaks & at the end of the night; the 6 yr old is like your 7 yr old, she gets complainy after 5-10 min. of walking so she’s in it more but is getting better).

The weight limit is only 50 lbs. per seat & I’m pretty sure our 6 yr old exceeds that & our 8 yr old most definitely exceeds it. Even so, the chair fabric has held up the last 3 yrs as they’ve continued to use it. The only thing that has been a problem is the front wheels have started to bend so make the stroller hard to steer (probably because of the use of excessive weight). However, the description for this stroller state they improved the front wheels, so it may never be an issue for you.

I personally think you would have to try REALLY hard to break or damage a GT. They are beasts! I also think that the rental companies sell insurance for a low cost too.

I would rent a City Mini GT. They are awesome strollers. Although idk if I would put your 90# child in there, that is a lot to push! I would maybe get a single and trade odd.

They also make a riding board you can attach, so that might be an alternative to getting a double.

I have that exact stroller. It passes the recently updated size limits so no need to worry about that. It is very lightweight and strong. We have bought two over the last five years or so - they last 2-3 years with regular use included at zoos and at Disney parks.

However, my children are very petite. My DS7 occasionally uses ours and it works just fine, but he is probably closer in size to your 5 year old. It won’t break over 5 days, but it will be a little tight. But I’d say that about most umbrella type strollers.

The good news is that it’s cheap. Not much of a loss if it breaks.

Another thought - my DS7 did just fine walking on our last Disney trip. I think it’s about the age where most kids are able to either walk or can take a quick break if they get too tired. (Every kid is different though, no judgment.

doesn’t look like the one you linked has a basket

It does however have two sets of netting in the back, which we LOVE. Not as much room as a basket but forces us to bring exactly what we need and we get through security in a breeze cause the CMs can see right though the netting to our gallon-sized ziplock bags that contain our wipes, diapers, etc.

Thank you. Nice to hear from someone who has the stroller.