Has anyone done the starlight safari at animal kingdom? any feedback is appreciated! Thanks!!

I assume that you are talking about KS after dark. I haven’t done it yet (it’s on my list for my next trip), but from what I’ve read here, if you time it fall at “natural” sunset, it’s great, but if you go during “full dark” you will not see as many animals - although the big cats are supposedly more active. My plans are to do the daytime and a sunset (KS is my favorite ride in all of WDW), but if you’re only doing it once, and especially if you’ve never been, I would recommend the day time.

I tried booking it for Christmas, but couldn’t. Granted that was maybe 3 months ahead by the time I tried.

I would think it needs to be booked 6months out. Good luck!

The Starlight safari is an after dark tour from AK, I think from Kidani but not totally sure. It’s of the savannahs at AKL and uses the night vision goggles that they have on the outlook.

I think it’s around $79 each and there’s a minimum age too. I tried to book without success for our recent stay. Next time I’m trying 6 months out!

We went during Marathon weekend this year. Lasted about 45 minutes or so leaving from Kidani Village front entrance. It was interesting…here’s my take

The good:
If you don’t have the chance to stay in Kidani Village with a Savannah view, you get a view of what is out there at night.

You learn some new things about the animals that are out there, the CM’s that work with them and how they care for the animals. They will answer questions you have about animals or anything that they are capable of answering.

Less than 10 on our tour so it wasn’t crowded or annoying with tons of questions or people in your viewing area.

Pin Collectors: You get a cool glow in the dark Starlight Safari pin.

It was 40 degrees – they provided blankets! (Otherwise we would have been miserable)

If you have a good camera with ability to take night time pictures WITHOUT a flash, and the animals are close enough, you can get one or two decent pictures that look like this… (eh, hem iPhone 7) 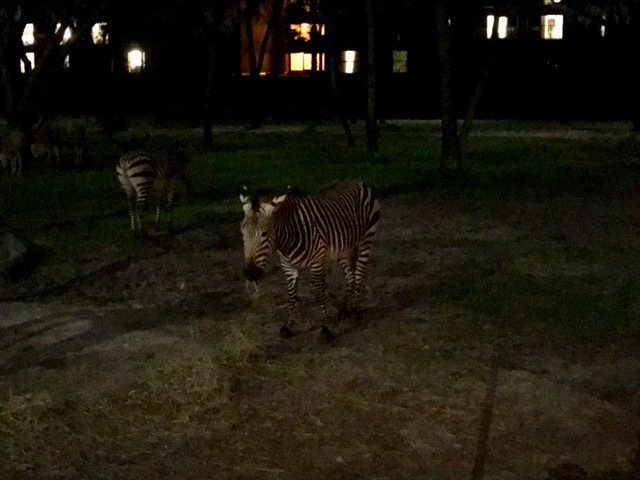 The bad:
The main disappointment for me was I thought this was a tour of the entire Savannah including the one KS runs on, or at least part of that. The tour is only of the Savannah areas by Kidani/Jambo House. Kilimanjaro is fenced off and you can’t see much past the fences.

The night vision is only one eye – not a full set of binoculars. For me, my eyes got irritated if I tried looking through the night vision for too long.

The animals are free roaming in this area so they may be very close to the vehicle, OR they may be so far away that you can’t figure out if the CM thinks they have pointed out an animal when all you can see are trees and shrubs!

You cannot use flash photography.

The night we went was the 2nd coldest night that weekend, so the giraffes were picked up because they can’t be exposed to the extreme cold which made for less animal sightings. (Not the fault of Disney so I understood)

I did get a survey for this after because we were one of the first booked after they announced it, and I answered honestly hoping that maybe they could make it more worth the amount charged for the tour. We did also tip at the end of the tour so that was in addition to the ticket price.

thank you for the feedback! very much appreciated!!