Stacey’s Family Trip Day 5, aka “Figuring Out that Universal is not Disney”

We started our first full day at Universal (Oct. 25) by heading out to USF for 7 a.m. early admission for its on-site guests. When planning our trip, we were unsure if we would be at UOR for 3 or 4 days, and so bought the annual pass, which cost the same as a 4-day park hopper (or Flex Pass as UOR calls it) (approx… $280.pp).

Diagon Alley opens for early admission, plus Fast&Furious ride, but nothing else. As it was still dark at that time, we couldn’t pry the kids out of bed to make rope drop, but we were walking through the gates by 7:30. We loved walking out of the Hard Rock Hotel and being at the front entrance of USF/IOA in about 5 minutes. We made our way to Diagon Alley which was already pretty busy. Got in line for wands at Ollivanders; kiddos did not get picked for the wand ceremony but that was still fun to watch and both bought wands. Then on to cast spells. As I had read, the censors are indeed a bit sensitive. DD7 managed the spells pretty well, but DS5 was pretty frustrated that he couldn’t get them quite right. The “wandering witches” helped him and he did start to get a few of them. The set-up of Diagon Alley was pretty amazing, I must say!

After a bit of spell-casting, we were hungry. We wanted something fast and so wandered back out of Diagon Alley in search of a quick breakfast sandwich but couldn’t find one easily. Had to walk a ways back and only found Starbucks (there is a coffee and pastry place pretty close to Diagon Alley however). We were all a little overhungry and cranky (me). I think it was because I didn’t feel the same “magic” that I felt at Disney, despite the awesomeness of DA. Then I spilled my kid’s milk on my own backpack and ended up bickering with DH about whether some other shop served oatmeal. When the food kicked in, we adjusted ourselves and felt a little better. Once I adjusted my expectations for UOR and realized it was not going to be an extension of Disney, I had a better time, and actually really enjoyed myself. But I think I was a bit cranky in the morning from having left the WDW bubble the prior day. I got that out of my system quickly, though.

We headed back towards Diagon Alley and stopped at the Knight Bus, where both the conductor and that little talking head talked to my kiddos, made jokes and said their names! My daughter loved it. During the exchange, a random woman came up and took a selfie with the talking head (while he was talking to my daughter). The conduct laughed and said to her, “Don’t mind us!” I appreciated that and it was a bit of an edge that you don’t see with Disney CM’s. She was totally oblivious and I then approached her and said, “Excuse me, my daughter is in the middle of talking to him.” . That got her attention and she moved. Husband and I commented that we didn’t think something like that would happen at Disney.

We headed back in to DA and rode Gringotts (after putting our stuff in lockers—a slight bit of a pain). My family really liked it; I thought it was good but didn’t LOVE it. I was surprised b/c I was expecting to love it. As I found with many of the USF rides (and Gringotts), I just was not a huge fan of the way some of the simulator rides swing disconnectedly from one scene to another, disjointedly in my opinion (Spiderman and Transformers were similar). I know Gringotts is the favorite for many other folks. Gringotts had a bit more of a coaster element built into it which made it a little better than some of the ones we tried later (I liked it better than Spiderman or Transformers).

We then took the Hogwarts Express to the Hogsmeade side at IOA. This was really cool. It is built to be just like the real train station and you even “disappear” through platform 9 ¾. The ride itself was fun; kids loved seeing Harry’s shadow and hearing his voice just outside our train car.
I liked Hogsmeade even better than DA; I found it brighter and more open, although yes a little bit smaller in total. Kids loved Flight of the Hippogriff, and with our Express Passes, we rode it 4 x in a row with no wait (posted wait was 10 min). Then headed in to the castle; only DH and I could do Forbidden Journey, but kids loved walking through and seeing the talking portraits, the sorting hat, and a projection of the Fab Three. Also were perfectly happy watching HP in the child swap room while DH and I took turns riding Forbidden Journey. FJ was a great ride; wished more of it was the riding-on-a-broomstick part, but the feeling of being part of the Quidditch game was amazing. Still not as good as FOP in my opinion, but very, very cool. If I had not already just ridden FOP 3x at WDW, I might have felt differently about it, but I think FOP ruined me a little bit!

After that we took the HE back to DA, and ate at one of the fast food joints near San Francisco. (Line for Leaky Cauldron was way out the door). It was okay. Burgers and fries. Had trouble with mobile ordering, and CM who said they would be “standing right here if you have any problems!” when encouraging me to mobile order, was nowhere to be found. After sitting in the restaurant messing with the mobile app for 15 min, I gave up and stood in line, annoyed at CM who told me to use mobile ordering and then disappeared.

After that, DD7 and I were dead set on a Lard’s donut. We walked over to Simpson’s land and bought one of the enormous ones. It was amazing. DD7 and I agreed, best donut we’ve ever had (we both ate about ¼ of it) and had lots of stares as we opened the box. The thing was more like a medium sized cake than a donut. Hubby thought it hilarious and kept asking when he could throw the rest away. DD7 and I would not let him.
By that time, it was about 2 pm. On our way out, decided to do the minions ride before heading back for nap. Was pleasantly delighted by that one. The kiddos love Minions, but I have never been a fan. But the set-up and actual “ride” were adorable and fun. It was the only ride where we still had a small wait even w/ the Express Pass, but with 2 pre-shows, the wait went pretty quickly (maybe 15 min total). It was a hit. I ended up really liking this one and the Jimmy Fallon Race Through NY, both of which are set up similarly, theater-style seating.

Walked back to HRH for naptime. Once DS5 was asleep, DD7 and I snuck out for an hour of pool time.

After nap, we walked back to check out IOA. (Note: Being a geeky lawyer, I am compelled to point out that IOA is improperly named. It’s actually the opposite of an island. It’s a lake with a circle of land around it. End rant.) Got there right at 5 as USF was closing for Halloween Horror Nights. I saw the stream of people heading over to IOA from USF and worried we had had bad timing. But, other than a 5 min wait to get into the park, we didn’t notice particularly heavy crowds at all. We were not on a mission to hit as many rides as possible, since we had another full day tomorrow ahead of us. We rode Spiderman (pretty good—kids liked it more), Kong (very good, we all liked it, and not really too scary even for DS5), and the Dr. Seuss stuff. We skipped all Popeye water rides and Jurassic stuff, promising to return the next day, as it was a little too dark (not quite chilly, but not hot) to get wet.

We exited after Seuss and headed over to Antojitos, as I had heard good things, including that their tableside guac is amazing. It was. We waited (w no reservations) 5 min to get a table-ready text and sat outside facing the courtyard, around 7:30 pm. Everything was busy but it was great being able to walk up to our restaurant of choice. While eating guac and chips, DS5 proclaimed this his favorite day, ever. Kids loved their food and played around in the courtyard area between bites. DH and I loved ours, and the total bill, including drinks for us, appetizer and entrees somehow came to less than our pool bar food at HRH ($90 vs. $100).

We walked the short trip back to HRH and closed out a great day. 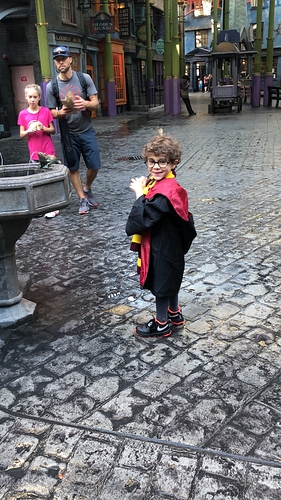 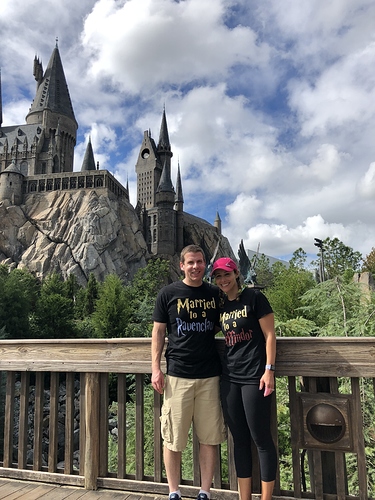 I adore that you pointed out that IOA is not an island. Another geeky lawyer here.

I am compelled to point out that IOA is improperly named. It’s actually the opposite of an island. It’s a lake with a circle of land around it.

Now, wait a minute. You are working under the assumption that there is only one definition of island. But there isn’t. I would argue that IOA is named properly. As evidence, I submit to you this:

a tract of land surrounded by water and smaller than a continent; something resembling an island especially in its isolated or surrounded position: such as; a usually raised area within a thoroughfare, parking lot, or driveway used especially to...

If you follow the link, and look at the THIRD noun definition, it fits perfectly here.

I may not be a geeky lawyer. But I am a geek!

Are you referring to the third definition that says, “An isolated group or area”? If so, I don’t think that IOA is physically “isolated.”

Are you referring to the third definition that says, “An isolated group or area”? If so, I don’t think that IOA is physically “isolated.”

The entire park consists of several of these “islands.”

What you don’t have is Dr. Seuss showing up in the Marvel area, and Harry Potter isn’t in Jurassic Park area, etc. They are isolated from one another!

Aha! Okay, I’ll buy that. Now my visit there doesn’t feel like a lie.

Now my visit there doesn’t feel like a lie.

In that case, my work is done here! I can relax knowing I’ve done at least ONE act of kindness today. (And by “act of kindness”, I mean, “act that people find truly irritating and wish they could escape my annoying personality!”)

Hey, if you can’t geek out on these forums, where can ya?